School bus driver Peter Homer is the first-ever winner of NASA's innovation competition. The former aerospace engineer designed and built a new and improved astronaut glove with about $500 of materials and his mother-in-law's 1950s Singer sewing machine. 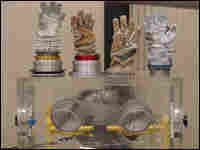 Peter Homer's winning glove on the right beat out the competition, including NASA's glove on the left. Matthew Z. Homer hide caption

In our weekly feature, Science Out of the Box, we endeavor to answer basic questions about the world around us like how long exactly is a second. We also check in with scientists to get a glimpse of how they figure out the things they do. This week's story is about an unlikely advance by an unlikely space engineer.

LYDEN: NASA has several technological puzzles it needs help solving. If you can figure out a way to get breathable oxygen from moon rocks, that will fetch a quarter-million-dollar price. NASA will give you $2 million for designing a craft that can land on the moon. Now, complex as these challenges are, it's unsurprising there hasn't yet been a winner until now.

Jeanne Baron has this profile of a man who just won $200,000 for building a better space glove.

JEANNE BARON: Peter Homer is a lean, clean-shaven man. He's the kind of guy who wears his T-shirts tucked in. Homer has a background in aerospace engineering. But a few years ago, he gave up the corporate life and moved to Southwest Harbor, Maine. He's been holding down different kinds of jobs.

Mr. PETER HOMER (Winner, NASA's Astronaut Glove Challenge): My goal - I had two goals going into the competition. One was to beat the NASA glove. And my second goal was to impress the NASA guy. And I did need the 200K.

BARON: Ten long months later, he was still struggling to find a way to make a more flexible glove. And then in the dark early hours one morning in March, he set aside the materials he'd been working with.

Mr. HOMER: And I took a roll of blue painter's tape and starting wrapping it around my fingers and my hand and eventually wrapped it all around all my fingers and my hand in a certain way that in the pattern that you see on the glove. And I was amazed that I could easily bend my fingers. And that was kind of the magic moment where I went, okay, this is the way to do it.

BARON: Homer's challenge was to build a glove as tough as NASA's but not as stiff. Astronauts are plagued by blisters and chaffing from the difficulty of moving their hands and wrists in their pressurized suits. Homer's crisscrossed tape led to a fabric glove he sewed with crisscrosses of ribbon down each finger. Homer says it works like a hinge at each finger joint.

Some of Homer's competitors spent tens of thousands of dollars creating and testing their prototyped gloves. Homer used his mother-in-law's 1950s sewing machine.

(Soundbite of a sewing machine)

Mr. HOMER: There was a lot of that going on.

BARON: And to test the glove under pressure, he often used a hand pump from a blood pressure cuff.

Mr. HOMER: I'm going to pressurize this to just over four psi, which is a working pressure of the suit.

BARON: Homer puts his hand inside a glove, which is mounted inside a large glass jar. The contraption allows Homer to recreate the conditions of space. He bought the jar off the Internet. Homer says he really kept his costs down. That's part of the idea.

According to NASA spokesman Ken Davidian, the space agency spends huge sums in the trial and error phase of testing an idea. He says offering up a fraction of those cost in prize money for a successful prototype supports talent outside of NASA and saving the bottom line.

Mr. KEN DAVIDIAN (Spokesperson, National Aeronautics and Space Administration): We expected that it will cost NASA (unintelligible) $600,000 to even a million dollars to do well - you know, it just cost NASA $200,000.

BARON: And do you know what it cost Peter Homer?

Mr. DAVIDIAN: Don't even tell me, I don't want to know.

BARON: Homer says he spent about $500 on eight yards of Ripstop Fabric, and the jar, and a few other things. The return on that investment can't yet be calculated. There will be contract negotiations if NASA uses Homer's ideas. That would come when NASA redesigned its spacesuit for the first mission of the Orion capsule scheduled to fly to the space station in 2014.