Accessibility links
Afghan Midwives Target High Infant Mortality Nearly one in seven babies in Afghanistan dies before age 1. To counter those statistics, Afghan health officials and Western aid groups have developed a program to train midwives. Women learn how to assist in childbirth — and men learn to support the women in their work. 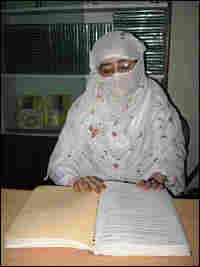 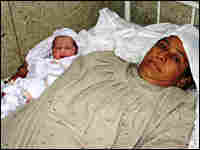 Afghanistan's youngest citizens are the ones in the most peril. The war-ravaged country has one of the highest infant-mortality rates in the world. That's because nearly nine out of ten Afghan women give birth without medical help.

Now, Afghan health officials and Western aid groups are trying to change that. They've developed a program to train midwives. Women learn how to assist in childbirth — and men learn to support the women in their work.

At one hospital in Jalalabad, trainees come from among Afghanistan's most underserved and dangerous provinces. These are places where illiteracy is rampant, and women's roles are limited to that of subservient wife and mother.

The head trainer at the hospital, an obstetrician named Dr. Hafiza Sahak, believes her trainees are the only hope to curb her country's staggering infant mortality rate.

"Three years before, when we started we started this midwifery education program, we prepared some advertisements and flyers printed and distributed in remote areas," Sahak says. "You know, in the first entrance exam, just six students coming from the whole region. And we needed 48 students."

Now, she has so many applicants she has to turn them away. Sahak says her secret was winning the cooperation of the trainees' male relatives. For example, each girl's father — or if she's married, her husband and father-in-law — sign or mark a contract pledging the trainee will work after graduation. The head of the tribe is also required to sign off on the deal.

In exchange, the program director houses the girls in a walled compound off limits to men. Female relatives and in-laws visit periodically, to make sure the girls are behaving.

As an added bonus, trainees with children have full-time, on-site day care at their disposal.