Accessibility links
Poll: Rural Vote No Longer a Lock for Republicans A new national poll suggests rural Americans are no longer reliably Republican, and the Bush administration's conduct of the war in Iraq seems mainly to blame.

Listen
Poll: Rural Vote No Longer a Lock for Republicans

More on the Poll 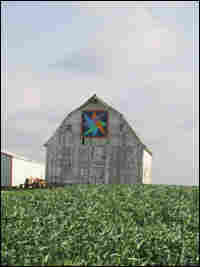 A new national poll indicates rural Americans are no longer reliably Republican, and the Bush administration's conduct of the war in Iraq seems mainly to blame.

People from the nation's smallest places had the biggest impact in the last two presidential elections. President Bush's dominance in rural counties is credited with giving him his winning margins in both 2000 and 2004.

But the new survey, of 804 likely voters living beyond cities and suburbs, indicates that the Republican formula for winning presidential elections is losing a key component.

"I think there are two big headlines out of this poll," says Anna Greenberg of the Democratic polling firm of Greenberg Quinlan Rosner Research. "The first is 'Republican Collapse in Rural Areas.' And the second is 'Rural is the Battleground in 2008."

Greenberg conducted the survey coast to coast, May 31 through June 5, in what the Census Bureau calls "non-metropolitan" counties.

The poll was commissioned by the non-partisan Center for Rural Strategies, a Whitesburg, Ky., group trying to attract candidate attention to rural issues. Republican political consultant Bill Greener of Greener and Hook also participated in the design and analysis of the survey.

"Republicans are vastly underperforming among rural Americans," Greener said in response to the survey results. "And if we're going to succeed in 2008, we're going to have to do better."

Forty-six percent of the survey respondents indicated they'd vote for an un-named Democratic candidate for president if the election were held today; 43 percent favored a Republican. That's a statistical dead heat, given the poll's margin of error of plus or minus 3.46 percent.

Concern about the war in Iraq seems to be the reason for the decline in Republican support, according to respondents in the new poll. Three-fourths of those surveyed know someone who is serving or has served in the wars in Iraq or Afghanistan.

"I don't like the way the war in Iraq is going as well as everybody else," says Judy VanAhlsen, a realtor in rural Jefferson, Iowa, who describes herself as a lifelong conservative Republican. "I think people are so disenchanted with the war, with Bush in general. I think people think anything is better — even Republicans [think that]."

Iowa's early presidential caucus in 2008 makes the state critical for presidential hopefuls. They're already arriving at Iowa airports and running political ads on the airwaves.

NPR randomly sampled opinion in Greene County, a bellwether in Iowa elections, which is evenly split between Democrats, Republicans and independents. 10,000 people live there, in small towns scattered among 500 square miles of soybean and corn fields, and cattle pastures. Two young men from Greene County have died in the war in Iraq, and more are currently serving.

"I'm frightened everyday," says Rita Highland, a retired homemaker in Churdan, Iowa. Her grandson is in the Army and serving in Iraq. "He's right in northern Iraq where it's bad ... I get up in the morning and I think about it. I go to bed at night and I think about it."

Highland tends to vote Democratic but is also strongly anti-abortion and seems to side with Republican positions on that and other so-called moral issues. This cross-pressure is reflected in the new poll.

Forty-one percent named the war in Iraq among their two top issues for the president and Congress. Half agreed with the statement that "the current course [in Iraq] cannot bring stability, and we need to start reducing the number of troops." Half also agreed with congressional attempts to reduce troop levels in Iraq. Less than half, 45 percent, affirmed the Bush administration's "stay the course" strategy; and 42 percent want their members of Congress to oppose "measures that could undermine the president's policies in Iraq."

These responses show a complete reversal from earlier surveys of rural voters, where clear majorities favored the president's approach.

That and other poll responses give Republicans hope, says political consultant Bill Greener. "When you look at how rural Americans describe themselves and what they say are the important things, it's a template for Republicans to recoup that lost ground."

Greener would like the approach taken by Jefferson, Iowa, Republican Judy VanAhlsen. "I believe in home [and] family," VanAhlsen says. "I believe in the sanctity of life. And the [Republican] party...seems to support those things. I don't like all the people. I don't agree with everything they stand for. But those basic issues to me are not worth abandoning ship."

That's not the case for Greene County farmer Jerry Peckumn.

"I was born a Republican. My ancestors have been Republican since the Civil War," Peckumn notes. "But I feel very uncomfortable with the war. And the Republican Party in general has not been willing to hold the Bush administration responsible [for] any of the alleged problems ... I think we need to make a change."

Can Democrats Win Over the Rural Vote?

Peckumn is considering attending a Democratic caucus in Iowa next year. But he's not enthusiastically embracing any of the Democratic candidates — and that's consistent with the respondents in the poll. They were evenly split between warm and cool feelings for all the candidates, Democratic and Republican. Democrat Hillary Clinton rated as unpopular as illegal immigrants.

"[Democratic candidates] don't have to win in rural areas to win nationally. They have to be competitive," she says. "They have to not lose by 19 points. So the key is not to try and bring over the Republicans who could never imagine themselves voting for a Democrat. It is to continue to do very well with independent voters and do extremely well with Democrats."

Greenberg believes economic appeals would solidify independent and Democratic support, given that much of rural America is bleeding jobs and young people. And there's plenty of time to reach out, notes David Yepsen, a native of Greene County and the veteran political columnist at the Des Moines Register.

All the candidates have an opportunity to make rural appeals late in June at the first annual National Rural Assembly outside Washington. Hundreds of rural advocates and public officials are registered. Fifteen presidential hopefuls were invited. But assembly organizers say none are attending.