Listen
'Dinner' and a Show: Race, Romance in Pop Culture 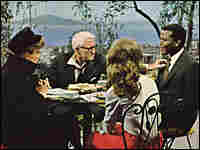 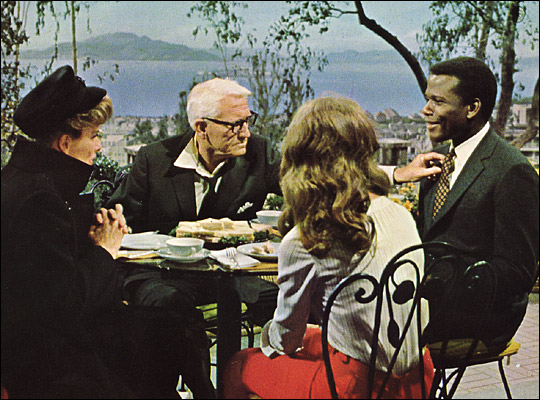 Michele Norris and Bob Mondello talk at more length about:

Producers’ challenge to the production code, the filmmakers' strategic handling of the kiss, and the audience's ultimate response

How the movie holds up as both entertainment and art 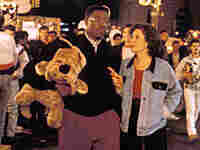 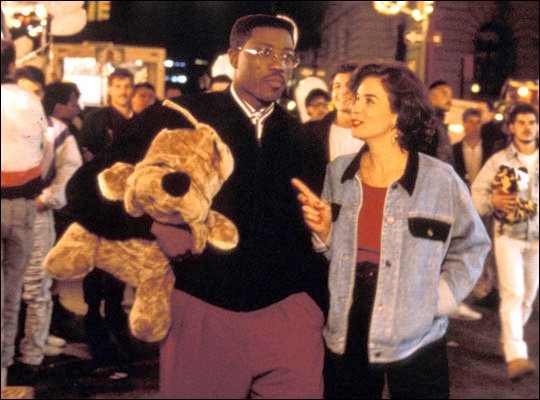 'Pinky' and the Pain

Long before Guess Who's Coming to Dinner, "passing films" were one way Hollywood grappled with issues surrounding race. One such is 1949's Pinky. 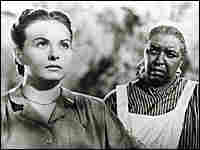 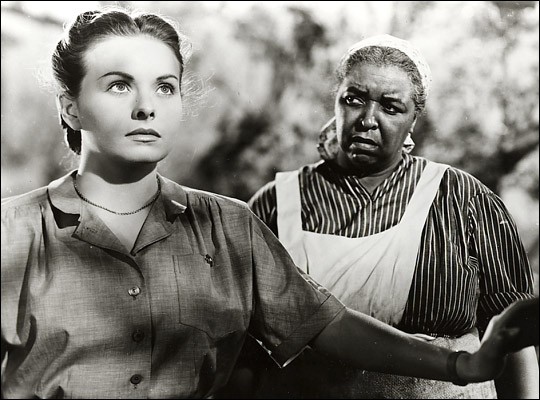 Read a chapter on Pinky (or an entire University of Virginia thesis) dealing with race and identity in "passing films."

Attached, but 'No Strings'

The 1962 Broadway musical No Strings caused a stir -- but not the one you might guess. 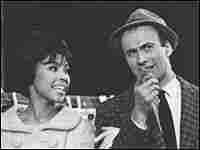 Race isn't ever an explicit issue for the fashion model (Diahann Carroll) and the novelist (Richard Kiley) in Richard Rodgers' No Strings — but their Paris romance still ends before the 1962 musical does. Courtesy of The Rodgers & Hammerstein Organization hide caption 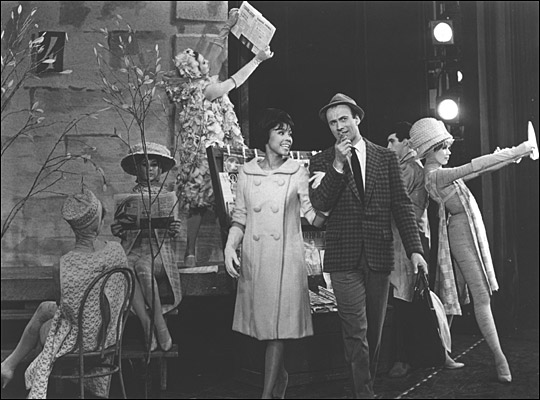 Race isn't ever an explicit issue for the fashion model (Diahann Carroll) and the novelist (Richard Kiley) in Richard Rodgers' No Strings — but their Paris romance still ends before the 1962 musical does.

Courtesy of The Rodgers & Hammerstein Organization

Norris and Mondello talk about what was revolutionary in Broadway's No Strings (it wasn't the interracial romance); about the Pulitzer-winning play The Great White Hope; and more.

From the original cast album, Carroll and Kiley sing 'The Sweetest Sounds.' 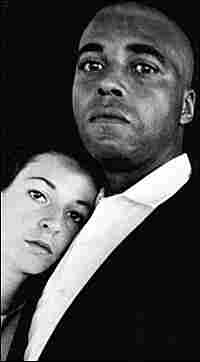 Guess Who's Coming to Dinner, released just a few months after the landmark Loving v. Virginia decision that legalized interracial marriage, confronts a liberal-minded San Francisco couple (Katharine Hepburn and Spencer Tracy) with the question of whether to endorse their daughter's marriage to a black doctor. Their eventual answer — I'm not really spoiling any surprises here — is yes.

But that fact confronted the film's producers with a not dissimilar conundrum: Would audiences in 1967 pay to see that question answered in the affirmative? If they did, as the producers were all too aware, it would be the first time they had done so.

Despite a stipulation in the 1934 Motion Picture Production Code that "miscegenation (sex relationships between the white and black races) is forbidden," Hollywood had managed, on occasion, to deal timidly with interracial romance prior to 1967 — usually in films where light-skinned African-American women concealed their heritage from their boyfriends, then paid for that deception. These stories almost always ended by breaking the couple up or ostracizing them if they chose to stay together.

Just having Sidney Poitier kiss Katherine Houghton in Guess Who's Coming to Dinner — witnessed by the audience and by a grimacing cabbie in the taxi's rear-view mirror — was a provocative step. In fact, it not only challenged that provision of the Production Code, it also raised questions about whether theaters in the South would even show the film.

They did, as it turned out, and the picture ended up being an Oscar-winning hit. But its success didn't open the cinematic floodgates with regard to interracial romance. Nearly a quarter of a century later, after Spike Lee had made Jungle Fever, in which two interracial romances are seen from a number of perspectives, Ebony magazine interviewed him for a cover story headlined "The Last Taboo." Asked whether attitudes in Tinseltown had changed, Lee replied succinctly: "The last taboo is still taboo."

Among the films in which Hollywood has dealt with interracial romance:

What Happened in the Tunnel (1903, silent short comedy) — A white man flirts with a white woman on a train. He moves to kiss her as they go into a tunnel — this being 1903, there are no lights either on the train or in the tunnel — and when they come out the other side, the woman he was flirting with has changed seats with her African-American maid. From the maid's reaction, it's clear that she has received the kiss.

Imitation of Life (1934, with Claudette Colbert, Louise Beaver, Rochelle Hudson) — The light-skinned daughter of an African-American housekeeper passes for white. While her mother and her mother's employer form a business partnership, the daughter gets romantically involved with a white suitor. (Remade in 1959 with Lana Turner, Juanita Moore, and Susan Kohner.)

Pinky (1949) — Light-skinned African-American woman from the south passes for white in the north, falling for a white doctor who doesn't know about her background. She returns to the south, builds a life there in the black community, and opts not to pursue life with doctor.

Jungle Fever (1991) – Married African-American architect (Wesley Snipes) begins an extramarital affair with his Italian-American secretary (Annabella Sciorra). The film is about the stereotypes characters carry into the relationships, and about a bad situation — the affair — made worse by race.

Far From Heaven (2002) — A gauzy tribute to '50s films in which housewife Julianne Moore has a flirtation with her African-American gardener, Dennis Haysbert. Her hubby (Dennis Quaid), meanwhile, is discovering that he's gay.

This list, of course, isn't remotely inclusive. Films from Blazing Saddles to Purple Rain to Bullworth to Monster's Ball have also dealt in varying ways with the "last taboo" on screen.

And, as with most social issues, the stage got there first — and discussed it in considerably more detail. A few theatrical highlights:

Othello (1603) — Shakespeare's tragedy about a Moorish general and his blond Northern Italian wife was adapted from an ancient Greek tale. Until the 20th century, Othello was almost always played by a white actor in blackface. (Back when the play was first produced, women weren't allowed on stage in England, and their parts were played by boys, so blackface was the least of the artifice employed.) In 1943, African-American actor Paul Robeson set records in what was then the longest running Shakespearean production in Broadway history. As late as the 1930s, a production was banned in the American South because of laws against representing interracial romance on stage.

Show Boat (1927) — A subplot finds Julie, a light-skinned black woman passing for white and married to white man, forced off the showboat. She was played by Helen Morgan, a white woman, both on stage and in the 1934 film. Ava Gardner, also white, played Julie in the 1951 film version. More recently, Julie has generally been played by African-American actresses, including Jungle Fever's Lonette McKee in the 1990s Broadway revival.

No Strings (1962) — This musical by Richard Rodgers starred Diahann Carroll and Richard Kiley and featured the hit song "The Sweetest Sounds." The script doesn't make an issue of the black/white casting, but ultimately the romance fails for other reasons.

The Great White Hope (1968) — Playing a fictionalized character based on real-life boxer Jack Johnson made unknown actor James Earl Jones a star. His girlfriend was played by Jane Alexander, who was later named head of the National Endowment for the Arts. Both repeated their roles in the 1970 film version; playwright Howard Sackler won the Pulitzer Prize.

Hairspray (2002) — The presence of a cross-dressing star (Harvey Fierstein in the Broadway production, John Travolta in the upcoming movie, and Divine in the original non-musical film) nearly makes race a secondary issue in this buoyant show about the end of segregation in 1960s Baltimore.