Accessibility links
Zumpano's Power-Pop: Predating Pornographers Zumpano may forever be known mostly as the answer to, "What band was A.C. Newman in before The New Pornographers?" The Vancouver group made two records for Sub Pop before Newman began his more lucrative New Pornographers pursuits. 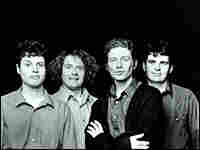 Zumpano deserves to be known for more than launching the career of The New Pornographers' A.C. Newman. hide caption

How does Zumpano's work compare to the New Pornographers discs that followed it? What other "Before They Were Famous" records deserve reconsideration?

Only Reason Under the Sun 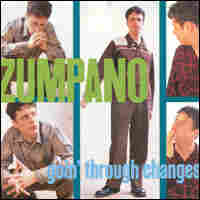 Zumpano may forever be relegated to the late rounds of Rock Snob Trivia, the correct answer to "What band was A.C. Newman in before The New Pornographers?" The Vancouver group, anchored by drummer Jason Zumpano, made two records for Sub Pop before Newman began his more lucrative New Pornographers pursuits. The second of them, 1996's Goin' Through Changes, offers a staggeringly creative re-imagining of '60s pop.

All the expected power-pop attributes are in place: On "Broca's Ways," the band links the spangly vocal harmonies of The Beach Boys to firm Badfinger-ish guitar patterns and a mystic aura reminiscent of The Zombies. But Newman and his cohorts, who share songwriting credit, display deep and eclectic tastes; having assimilated the obvious period signifiers, they weave more obscure (but no less musically potent) ideas into a fantastical patchwork of what might have been. The electric "The Only Reason Under the Sun" embodies that approach nicely: Its verses dwell in a disconsolate Jimmy Webb place, while its refrain possesses the utopian breeziness of singles by The Fifth Dimension.

Those types of juxtapositions illuminate the work of The New Pornographers, as well: Knowing where Newman ended up, it's interesting to hear him developing his skills. Like Brian Wilson and the other great tunesmiths he admires, Newman creates intricate, winding-lane melodies that stretch out over long expanses. Even when his voice sits in the faraway middle of the mix — as happens on "Throwing Stars," for example — Newman's lines are so ambitious, and so distinctive, it's worthwhile to follow them around corners and under bridges and through obstacles, just to see where they'll end up.