Accessibility links
'Camp Obama' Trains Campaign Volunteers No sing-a-longs or crafts at this summer camp. Instead, it's Politics 101, as volunteers from around the country come to Chicago for intense training sessions. From there, they return home or are dispatched to key states, where they work the precincts for Sen. Barack Obama's presidential bid. 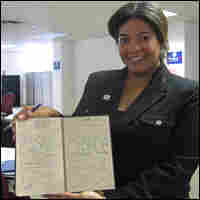 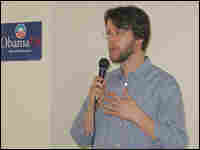 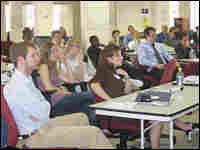 Across the country, kids are preparing to pack suitcases with swimsuits, sunscreen and bug spray as they look forward to a week or two at summer camp. But none of that stuff will be needed at one camp already under way in Chicago.

This camp has no campfire sing-alongs, no marshmallow roasts, no knotty-walled log cabins to sleep in. Instead, campers spend their days inside a drab office building, with walls adorned with maps of the all-important early primary and caucus states, including Iowa, New Hampshire, South Carolina and Nevada.

Welcome to Camp Obama. It's a camp for adults — mostly young adults and college students — who are hoping to hone their political skills and learn the basics of organizing for a certain barnstorming presidential candidate.

"Barack Obama is inspiring a new generation of people to come in, and a lot of people have not been involved in the political process before," says Hans Riemer, national youth vote director for the Obama campaign. "We are training them, teaching them how to be effective, showing them what their role is in our strategy to win the election ... We're taking people from raw enthusiasm to capable organizers."

All campaigns rely heavily on volunteers to carry the candidate's message and do much of the campaign grunt work. And all campaigns spend a significant amount of time and money training volunteers to be more effective. But Riemer says the Obama campaign is trying something different in order to capitalize on the huge number of young people expressing an interest in the Illinois Democratic senator's run for the White House, a demographic that Reimer says campaigns usually ignore or view as unreliable on Election Day.

"Historically, campaigns have looked at young people as the hardest demographics to mobilize," he says. "In reality, if you know what you're doing, they can be one of the easiest to mobilize."

He adds: "The most important thing is that they understand they are an important part of our strategy to win the election. This is not for show, this is not to feel good; this is to get trained and help us to win this election."

Reimer says the campaign needs to equip young volunteers for the long battle ahead in the key early primary and caucus states.

"It's not rocket science," he says. "What we have to do is give them the tools to create a plan and just keep in touch with them as they create their plan and execute it. Winning an election is just a matter of breaking it down into manageable pieces, so we show them what those pieces are, and then turn them loose. As long as we can do that, there's no problem. They can make it happen."

The Obama campaign seems out to avoid the mistakes of some past campaigns, such as that of former Vermont Gov. Howard Dean. Dean's electrifying campaign in late 2003 helped mobilize an estimated 1,200 enthusiastic volunteers into Iowa ahead of that state's January 2004 caucuses. But the results were disappointing: Dean's inexperienced and ill-trained team came in third behind the better-organized John Kerry and John Edwards.

Camp Obama director Jocelyn Woodards says her job is capture the enthusiasm of these political novices, who are so eager to volunteer for Obama's bid for the Democratic nomination and teach them the nuts and bolts of presidential campaigning.

"Our campaign has had the benefit of having a lot of enthusiastic volunteers, and so we wanted to make sure that they had real concrete ways to be involved and organize in their local communities. We go through everything from canvassing, phone banking, volunteer recruitment, our campaign message, how to develop an organization locally," she says.

She says the four-day training sessions, with about 50 volunteers in each weekly session, cost the volunteers nothing, though they are responsible for their own transportation and lodging.

University of Iowa student Andrew Wiess, a 21-year-old intern in Obama's Iowa City office, says he hopes the camp makes him and other volunteers greater assets to the campaign, so "you go back to Iowa City, or where ever you're from, and just be able to make more of an impact and really know what you're doing, to maximize your potential that way."

Tia Upchurch-Freelove, 19, came with Wiess from the University of Iowa as part of the group Hawkeyes for Obama. She says that even though she's lived in Iowa her whole life, she came to Camp Obama to learn more about how the state's caucuses work.

Despite all the political lectures, policy talk and strategy sessions, some of those attending Camp Obama say it's not completely unlike summer camp, especially when it comes to the camaraderie.

"Oh, my goodness; I'm sitting around a lot of people that I have so much in common with, especially politically, and I'm just forming bonds ... bonds that I really feel will last a lifetime," says Simone Simpson of Las Vegas, who says the experience takes her back to her youthful days at Camp Cedar Point.

"I loved summer camp, and this is a little bit like that, just as far as something new [where] I didn't know what to expect," says the 27-year-old. "Then the friendships that are formed and the fun, as well. So it's kind of a camp for Obama."

And just like she did as a girl at Camp Cedar Point, Simpson is having everyone attending Camp Obama with her sign a book — not a camp scrap book, mind you — but her copy of Obama's book, The Audacity of Hope.

"This is something I will keep forever and that when I have children one day, grandchildren one day, I'll show them," she said. "We are changing history and everyone here is just an important tool, and I just want to have this book and these memories."