Actor Don Herbert, who explained the world of science to young viewers in the 1950s and '60s, has died at the age of 89. His show, "Watch Mr. Wizard," ran for 14 years. Science Friday host Ira Flatow talks about Herbert's legacy with Robert Siegel.

We learned today of the death of Don Herbert at age 89. If you're too young to remember television in the 1950s and '60s, the name may not ring a bell. But if not, you may remember him as Mr. Wizard.

SIEGEL: He showed us surprising phenomena.

Mr. DON HERBERT (Host, "Watch Mr. Wizard): (As Mr. Wizard) Well, if you put the candle there like that and I hold the money over it, it won't burn.

SIEGEL: He demonstrated principles of geology.

Mr. HERBERT: (As Mr. Wizard) Have you ever seen this before?

Mr. HERBERT: (As Mr. Wizard) That's right. That's what it is. Do you know what happens to quartz when it's ground up by the elements in weather?

Unidentified Boy#1: Sure. The same.

Mr. HERBERT: (As Mr. Wizard) Well, what does the air around the light bulb do when it gets hot?

Unidentified Boy#2: It tries to expand. And so the cold air is going to push the warm air from the light bulb up.

SIEGEL: And many other branches of science. In short, Mr. Wizard, Don Herbert, was this country's science teacher. He was fun and he inspired people, people like NPR's own Ira Flatow.

Ira, do you remember Mr. Wizard?

IRA FLATOW: Oh, yeah. I grew up with Mr. Wizard. I never missed his show. I loved his show. And you know, he had great stuff for we and nerds on those days. He made it very interesting.

SIEGEL: He always had a young child or more than one on the program to - who was the audience, the studio audience, with his experiments.

FLATOW: Yes. Yes. And you know, what's also interesting about those clips you played was his trademark. He actually taught science by asking questions all the time. He asked the kids why did this work, you know. Why does the water stay in the glass when we turn it upside down? Do you have any idea that the paper cardboard is at the glass? How about air pressure, what's - you know, he'd go through this whole list of questions and really teach kids science by the way scientists do it.

SIEGEL: He seemed to be such a good science teacher. One would assume that he had some kind of background in science, but I gather he didn't.

FLATOW: You know, you would. But actually he had a background in show business, and I think everything he knew he taught himself. He was a self-taught science maven, but it was his show business that allowed him to be very inviting instead of frightening to the kids on TV.

SIEGEL: He also had a background in the service during the Second World War.

FLATOW: That's right. He flew many, many bomber missions over Europe. So he just did about everything in his life. He was sort of a renaissance man.

SIEGEL: And the experiments actually worked when he did them on television. And I gather that this was a live show.

FLATOW: Yeah, it was. And actually, he did dozens of live shows every year and that - someone who's worked on television doing demonstrations, I can tell you, this is - he's playing, you know, this is without a net. He was doing live experiments and actually when they didn't work sometimes, he would explain why they didn't work. So that was all part of the fun.

SIEGEL: Did you ever meet him?

FLATOW: Yes. He actually came to my office with his wife, Norma, and they had an idea for a show called Mr. and Mrs. Wizard in the Kitchen. He had a tape, and we played the tape, and it went something like this.

Mrs. Wizard, Norma, would say, hi, Don. Today, we're going to make some soup. And what do you think of that? And Don would say, well, you know, Norma, we're not really making soup. We're making a colloidal suspension of proteins, blah, blah, blah, blah, blah. And I don't think it ever got off the ground.

SIEGEL: You know, listening to some of those clips from "Watch Mr. Wizard," the old TV show, the image of it was very dated obviously today. But the exchanges between the curious kid and the teacher using the Socratic method to impart principles of science, there's something pretty enduring about those exchanges.

For example, instead of using a beaker he would use a jar. He would use a kitchen utensil, a pencil, a pipe, a garden hose - things like that. And in fact, when some of the people around him suggested using, you know, fancy laboratory experiments, he really told them to go find him something that, you know, was an every day item.

SIEGEL: Ira Flatow, host of NPR's TALK OF THE NATION: SCIENCE FRIDAY. Thanks for talking with us about Don Herbert.

SIEGEL: You can see some clips from Don Herbert's old TV show, "Mr. Wizard," at our Web site, npr.org. 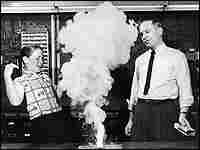 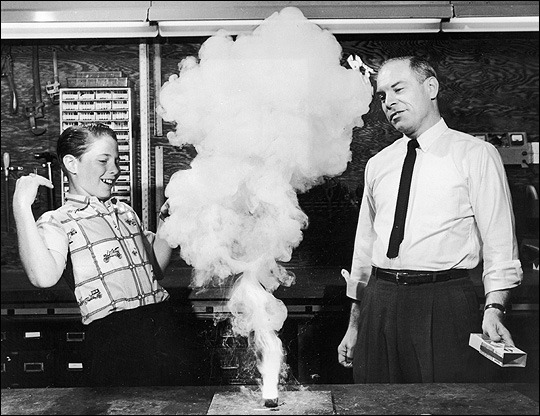 Don Herbert and an unidentified boy conduct an experiment on the TV series Watch Mr. Wizard, circa 1955.

Television's "Mr. Wizard," Don Herbert, who taught generations of children about science, died at his Southern California home Tuesday. He was 89.

From 1951 through 1964, Watch Mr. Wizard delighted young viewers with the joys of science on a set built like a simple workshop. Herbert would demonstrate experiments using household items and encourage kids to "try this at home."

Herbert received a Peabody Award for the science show in 1954.

Watch Mr. Wizard was briefly revived in the 1970s and then again in the 1980s, after Herbert retooled the show with a faster pace for the Nickelodeon channel.

Herbert was a drama major in college, but his plans changed during World War II when he enlisted in the Army. As an Army Air Corps officer, Herbert flew 56 bomber missions and participated in the invasion of Italy.

On the official Mr. Wizard Web site, a posting from his family reads that Herbert had lost his battle with cancer and died surrounded by his family — just one month shy of his 90th birthday.

"He really taught kids how to use the thinking skills of a scientist," former colleague Steve Jacobs told the Associated Press.

Born in Waconia, Minn., Herbert was a 1940 graduate of LaCrosse State Teachers. After the war, he worked as an actor, model and radio writer before starting Watch Mr. Wizard in Chicago on NBC.

The show moved to New York after several years.

-- NPR's Carrie Kahn, with reporting from the Associated Press.