Accessibility links
The Train Down South: A Trip to Segregation In the 1950s, Jim McFarland's grandmother took him on a train trip from New York to see relatives in the South. It was a summer ritual. As soon as the train hit Washington, McFarland knew he was far from New York.

Listen
The Train Down South: A Trip to Segregation 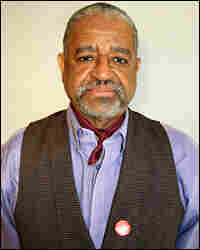 Jim McFarland visited a StoryCorps booth in Atlanta to discuss his memories of a summer ritual. StoryCorps hide caption

Jim McFarland was born in New York City in 1944. But his family was originally from the South, where his grandmother grew up.

From the age of 4 to when he turned 11, McFarland's grandmother took him and his brother on a train trip to see their relatives in the South. It was a summer ritual.

In those days, the trip presented drastic changes that let McFarland know he was far from New York.

The switch began, he said recently, when their train reached Washington.

"When we got to D.C.," McFarland recalled, "we would get out of an integrated car and we'd go into an all-colored car.

"I thought this was the greatest thing that could ever happen," McFarland says. "Because now I'm in a car with all my people. They've got the brown paper bags with the greasy chicken, and the sandwiches. We're having a good time."

But on the following stops, McFarland often had trouble with the divided bathrooms. He was too young to read "White" and "Colored" well.

"Use the one with the 'C' on it," his grandmother would tell him.

Going to the movies was another departure.

In New York, McFarland was forbidden from sitting in the theater balconies, which were reserved for smokers, and strictly for adults.

"I always wanted to sit in the balcony," McFarland says.

But in the South, he was required to sit there.

When he got back to New York, McFarland's friends would ask him, "What was the South about?"

McFarland's grandmother never let on to the details of the situation. She didn't talk about why she left the South. And she'd shush him whenever McFarland tried to talk about it.

But he found out on his own about segregation, and the feelings behind it.

That was when he was 11 — and when McFarland told his grandmother, "I don't want to go to the South any more."

Eventually, Jim McFarland did return to the South — but not for 20 years. He now lives in Atlanta.

Produced for 'Morning Edition' by Selly Thiam. The senior producer for StoryCorps is Sarah Kramer.