Accessibility links
Judge Denies Libby a Delay in Prison Sentence A judge denies former vice presidential aide I. Lewis "Scooter" Libby's request to remain free from prison while pending his appeal in the CIA leak case. Libby has been sentenced to 30 months. 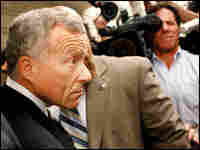 Former vice presidential Chief of Staff I. Lewis "Scooter" Libby must begin serving a 30-month prison sentence while he appeals his perjury and obstruction of justice convictions, a federal judge ruled on Thursday.

U.S. District Judge Reggie Walton described the evidence against Libby as "overwhelming," and said Libby did not show a substantial likelihood of overturning his conviction on appeal. "I would have to conclude that his request pending appeal will have to be denied," Walton said.

Libby was convicted of lying to investigators about his role in the leak of a CIA officer's identity. He was ordered to begin his sentence as soon as the U.S. Bureau of Prisons chooses a facility and orders him to surrender. Walton said he expects that process to take 6 to 8 weeks.

In the meantime, Libby's lawyers will ask the U.S. Court of Appeals for the District of Columbia to overturn Walton's ruling.

Libby did not react when Walton read the ruling. Libby's wife, Harriet Grant, wiped away tears.

Libby's supporters have urged President Bush to issue a pardon. White House spokeswoman Dana Perino told reporters, "Scooter Libby still has the right to appeal, and, therefore, the president will continue not to intervene in the judicial process."

Walton said Fitzgerald had to be independent because the investigation focused on some of the highest officials at the White House. "If the person doing the investigation has to report to someone tied at the hip to the White House," he said. "Our system of government's going to be in serious trouble with average Joes on the street who think the system's unfair already."

During the hearing, Robbins drew Walton's attention to a memo filed by 12 prominent law professors on Libby's behalf, but Walton was dismissive.

"The submission was not something I'd expect from a first year law student," the judge said, speculating it was written, "with the sole purpose of throwing their names out there," to help Libby.

Walton said he has received "harassing, angry, mean-spirited phone calls and letters" about Libby's prison sentence. He said he initially threw them away, "but after receiving more, some of which were more hateful than others, I decided to retain them."