Accessibility links
Flat-Panel TVs Showcase U.S.-China Trade Issues Before the recession, U.S. sales of flat-panel TVs skyrocketed. Americans were on a spending binge, buying billions more in goods from China than they exported. Today's rising TV prices may be a good sign — for both the U.S. and China. 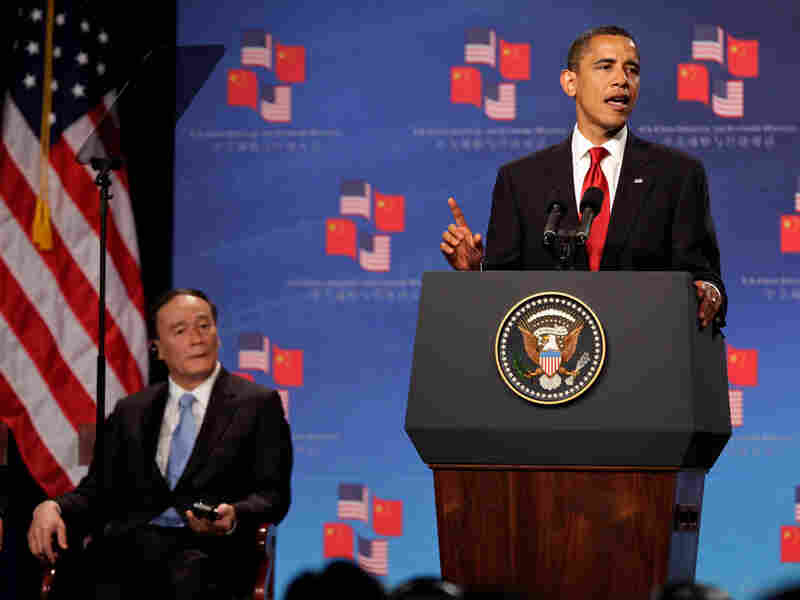 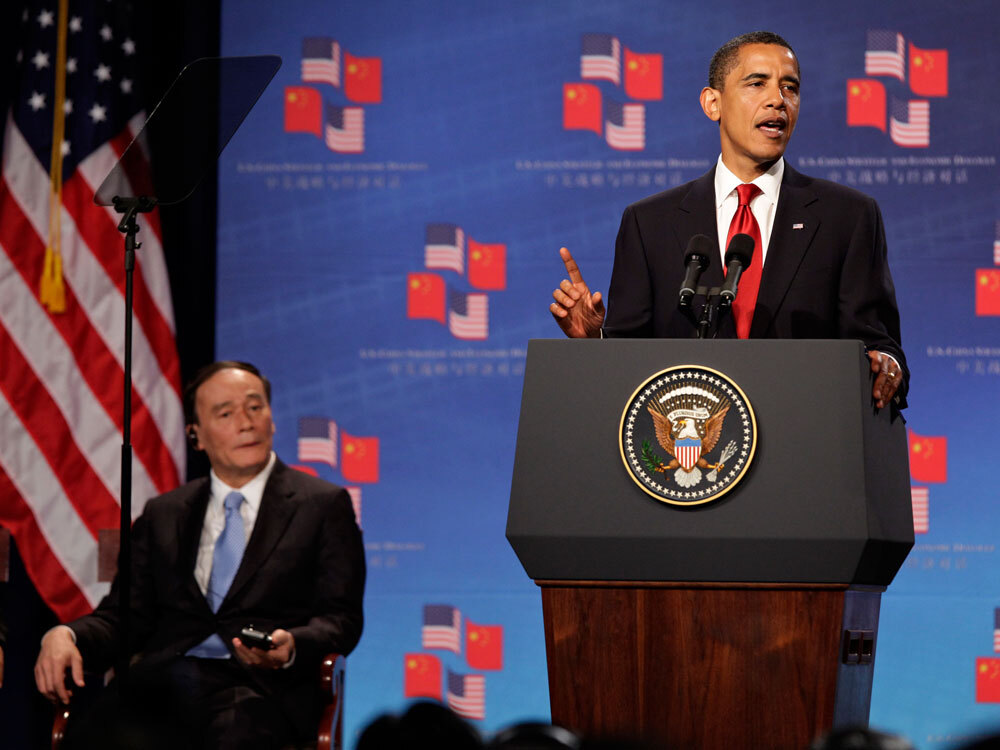 President Obama welcomes China's Vice Premier Wang Qishan (left) during the opening of the U.S.-China Strategic and Economic Dialogue in Washington on Monday.

Dozens of flat-panel TVs in all sizes and brands are on display from the floor to the ceiling at a Best Buy store outside Washington, D.C.

This TV showroom is a carry-over from the years before the recession, when sales of flat-panel TVs went through the roof. American consumers were on a spending binge.

"You had HDTV coming in, you had the general consumer spending environment, and then you had people buying new houses, big houses, that they wanted to put big TVs in every room, so it all fit together in this kind of warped way," says Paul Semenza, a flat-panel TV analyst for the research firm Display Search.

In fact, inside this flat-panel TV story is a tale of what went wrong in the U.S. economy: Too much easy credit, too much spending — notably on goods made in China, like most of the TVs in this showroom.

U.S. and Chinese officials are meeting in Washington on Monday and Tuesday to kick off what they're calling a "strategic and economic dialogue." On the agenda: joint action to deal with climate change, plus discussions of U.S.-China trade issues. The United States is running at least a $200 billion annual trade deficit with China, and managing that economic relationship is a challenge for both sides.

Buying Versus Selling To China 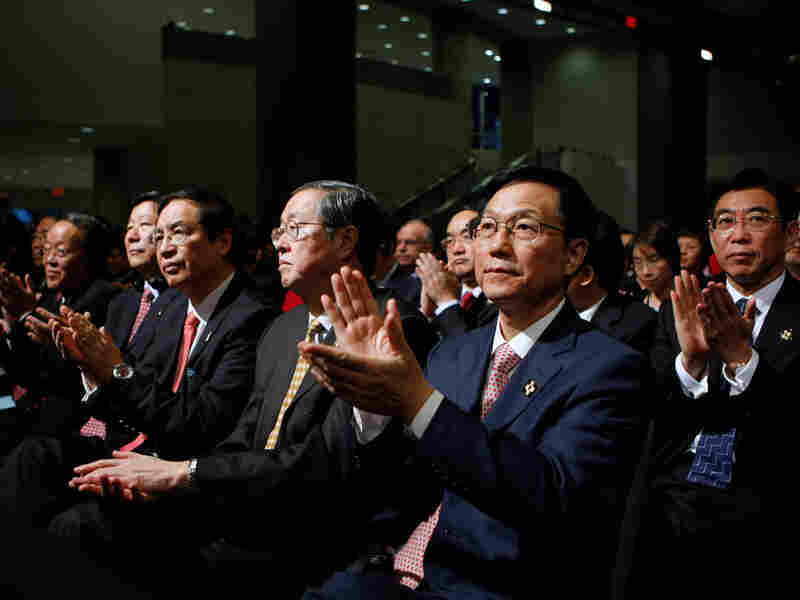 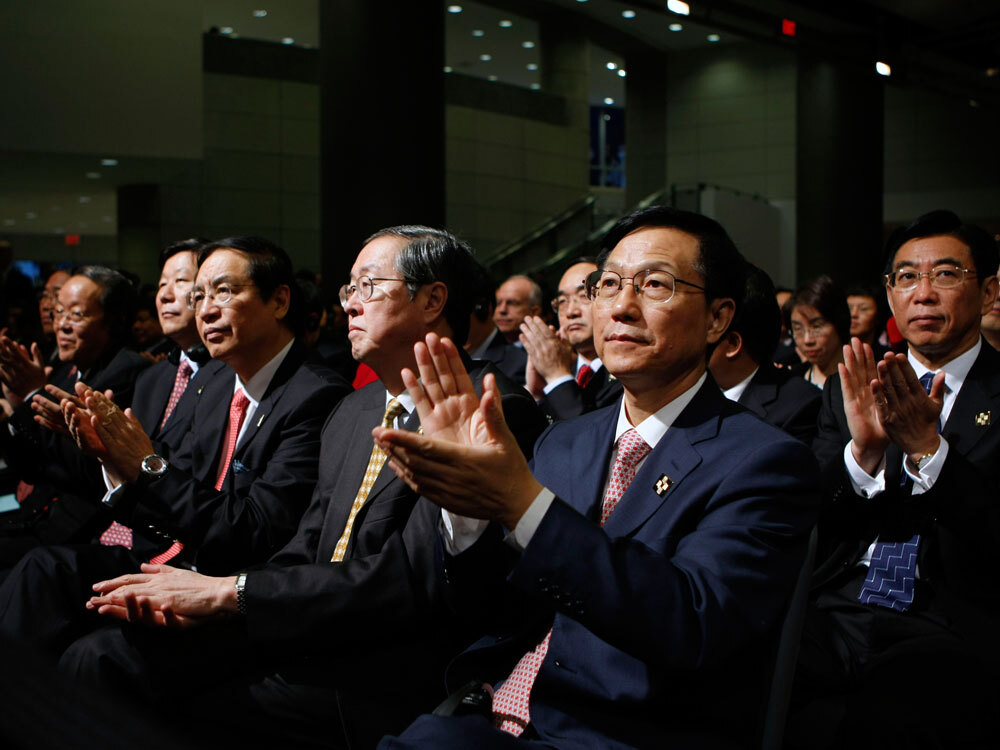 Each month the U.S. was buying about $20 billion more in goods from China than it was selling to China.

In part it was because goods from China were so cheap. The Chinese government kept the value of its currency, the yuan, artificially low. That meant U.S. dollars went further in China — they could buy more things coming out of Chinese factories. Economist Peter Morici of the University of Maryland says it was unfair.

"The Chinese yuan is so undervalued that it makes their goods about 50 percent cheaper than they should be on U.S. shelves," Morici says. "Plus, the Chinese government does a lot to subsidize exports. It's essentially pushing products into the United States well below the cost of production."

So there was a trade imbalance between the U.S. and China. The Chinese earned hundreds of billions of U.S. dollars selling goods to us. Much of that was invested in U.S. Treasuries: The Federal Reserve was borrowing that Chinese money. All that easy credit led, among other things, to the housing bubble.

Now the U.S. is trying to get out of this trap, in part, by getting Americans from here on to save more, and spend less.

One thing that would help is for the Chinese to buy more of their own TV sets. If Chinese consumers had more money to spend, the Chinese economy wouldn't depend so much on American consumers. More demand could be satisfied in China, and the U.S. and Chinese economies would be more balanced.

And, guess what? With respect to flat-panel TVs, it's actually happening.

"The government began to hand out coupons to Chinese households in rural areas that entitled them to a significant discount on a fairly broad range of consumer durables: refrigerators, stoves, air conditioning equipment — flat-panel televisions as well," says Nicholas Lardy, who follows China at the Peterson Institute for International Economics.

The result is nothing short of astounding. LCD TV sales trends in China have been on the rise: Some 13 million televisions were sold in 2008 and almost 24 million have been sold so far in 2009, according to Semenza of Display Search. He projects nearly 30 million LCD TVs will be sold in 2010.

The End Of Cheap TVs?

This increased Chinese demand for TVs — if it's sustained — could mean the end of cheap TVs in the United States.

The key element in an LCD TV is the flat panel itself, which is built with special glass and embedded with transistors. "The panel pricing has been going up the last couple of months, and we expect it will continue to increase through September," Semenza says.

This is actually good news for the U.S.: Overall, the U.S. wants China to export fewer TVs, build more to sell at home, and buy more from the U.S. That would bring trade more into balance, and both economies would be on a more solid basis for growth.

So should the U.S. applaud Chinese government economic policy? Only with one hand, says Lardy. "They have certainly done a lot to stimulate domestic consumption, but there's some areas in which they have still fallen short," he says.

That's been the case with their exchange rate. Early last year, the Chinese were letting the yuan gain in value. This made Chinese products a bit more expensive and could have reduced the trade imbalance. But in July, China effectively froze the exchange rate. So flat-panel TVs made in China are still too cheap.

Morici of the University of Maryland thinks it's time for the Obama administration to get tough with the Chinese.

The question is how hard to push the Chinese. The U.S. needs their cooperation on climate change, in diplomacy, and at the International Monetary Fund.

But if the U.S. economy is to be oriented more to exports and less to consumption, China will have to help — by loosening its currency exchange rate, for example. It's a sensitive subject, and it remains to be seen whether the two governments can discuss it.