Accessibility links
Food On Film: The Famished And The Feasts Tired of giant sodas and theater nachos at your local cineplex? Film critic Bob Mondello offers a tasting menu of movies that will whet your appetite for something more than popcorn. 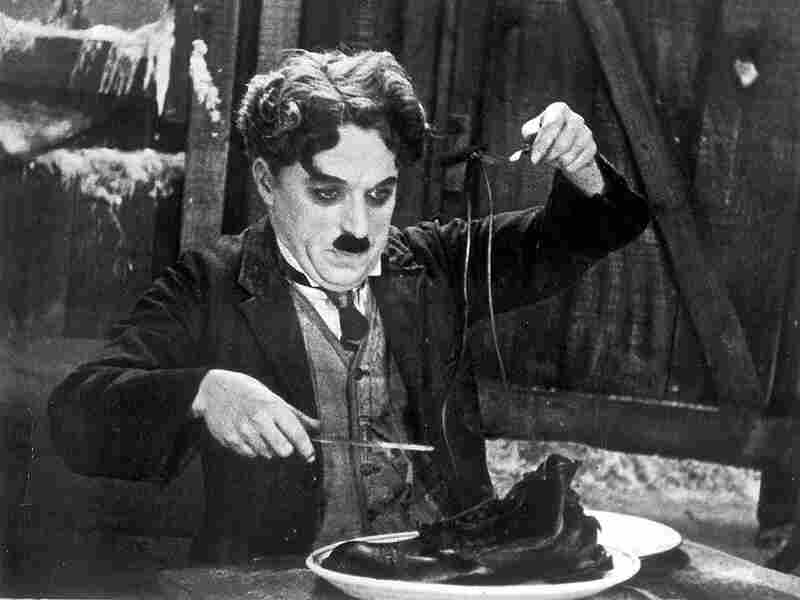 Food by the foot: In The Gold Rush, an unfortunate run of bad luck lands The Tramp (Charlie Chaplin) in Alaska with nothing left to eat but an old shoe. Photofest hide caption 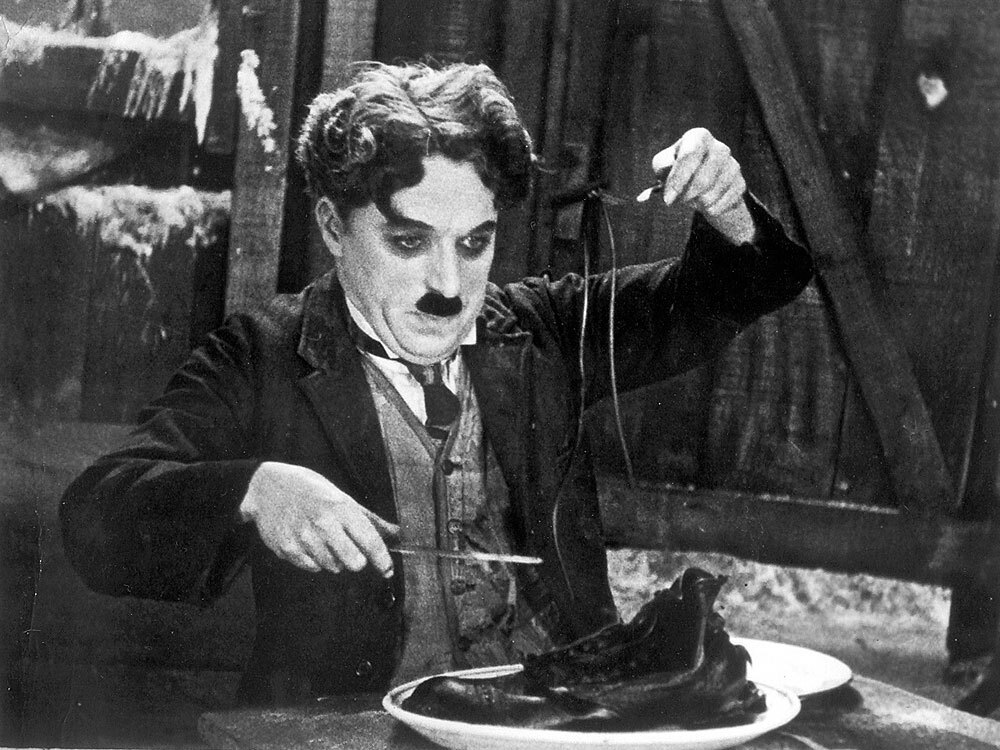 Food by the foot: In The Gold Rush, an unfortunate run of bad luck lands The Tramp (Charlie Chaplin) in Alaska with nothing left to eat but an old shoe.

Audiences have been lining up to gaze at what Oliver Twist and his buddies would call "food, glorious food" ever since the earliest days of silent pictures.

(Ever since way back in 1901, in fact, when an actor in a film called The Big Swallow opened his mouth really wide — and ate the camera.)

A famished Charlie Chaplin cooked his own shoe in The Gold Rush, twirling the laces on his fork like spaghetti — and in the animated classic Lady and the Tramp, it was a single strand of spaghetti that led the title characters to their first kiss, as an Italian chef and waiter sang the romantic ballad "Bella Notte."

Food and romance — or maybe that should be the romance of food. Think of Cher, falling for a one-armed baker in Moonstruck; of 18th-century squire Tom Jones being seduced by a pretty wench gnawing on a drumstick. Movies may be all about sights and sounds, but directors know that to conjure up a really believable world, they need to stir in at least the illusion of aromas and tastes.

'What I Wouldn't Give For A Plate Of Fried Green Tomatoes'

Food can be enormously useful in the creating of a cinematic world: Nothing says down-to-earth and normal like a home-cooked meal. In Fried Green Tomatoes, the cuisine was Southern. In Soul Food it was ... well, soul food. In Indiana Jones and the Temple of Doom, it was monkey brains — normal for the locals, though not so much for Indiana Jones. 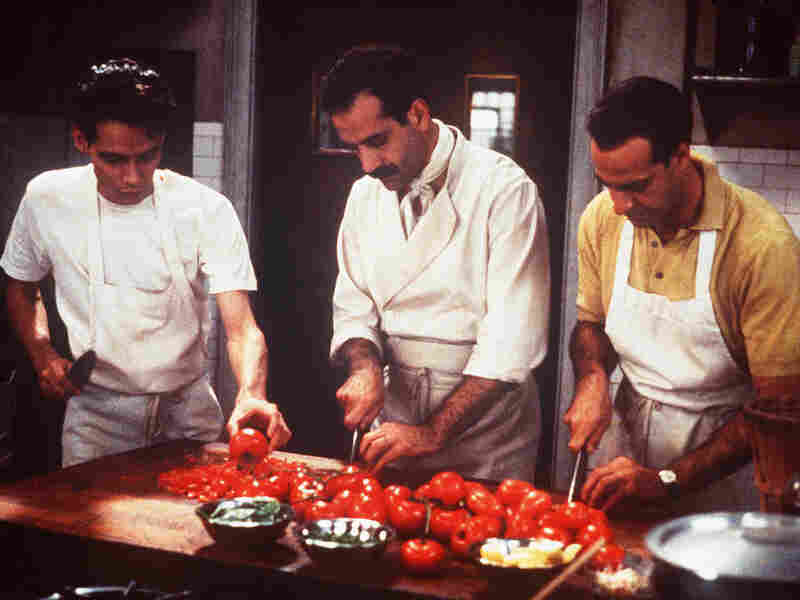 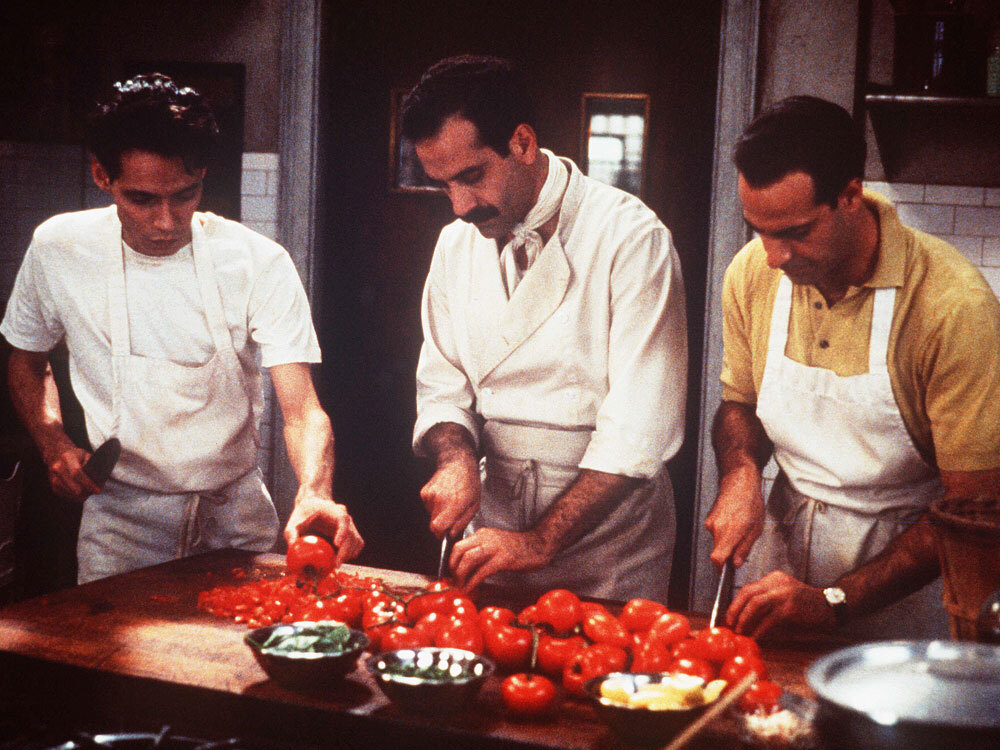 Upscale restaurant cuisine is another matter, requiring not just a decent chef but an educated palate — something filmmakers like to assume chefs can't always count on in their customers.

Take the two Italian brothers who run a failing but spectacularly good restaurant in the movie Big Night: They serve authentic Italian cooking to '50s diners who expect Americanized Italian. The chef is so distressed when a diner wants spaghetti with her risotto — "Two starches," he sputters, "I should make mashed potatoes for the other side of the plate" — that he declares her "a criminal," and insists he wants to talk to her.

Won't do him a bit of good, though, because taste is personal — whether you're talking taste in sweets (in the film Chocolat) or taste in wine (in Sideways). 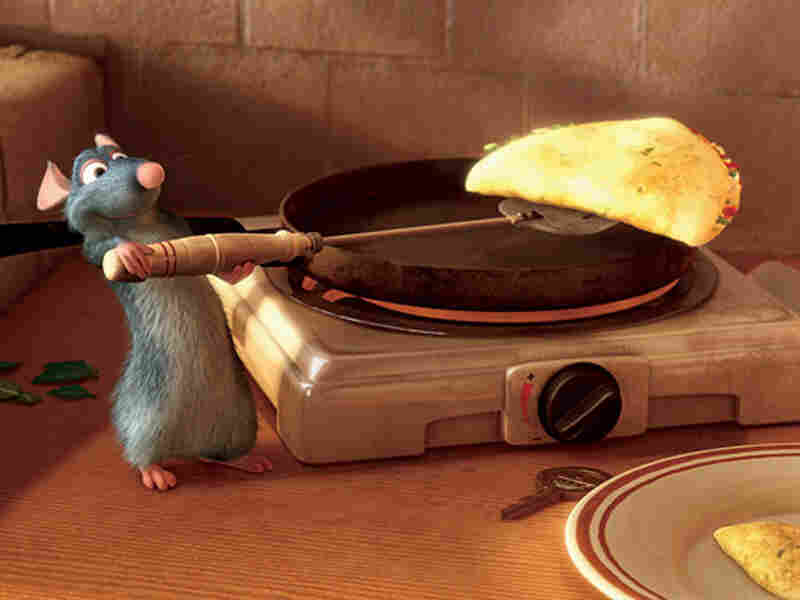 Rats to Riches: Remy (above) dreams of putting his gift of acute smell and taste to use by becoming a great chef. Disney/Pixar Studios hide caption 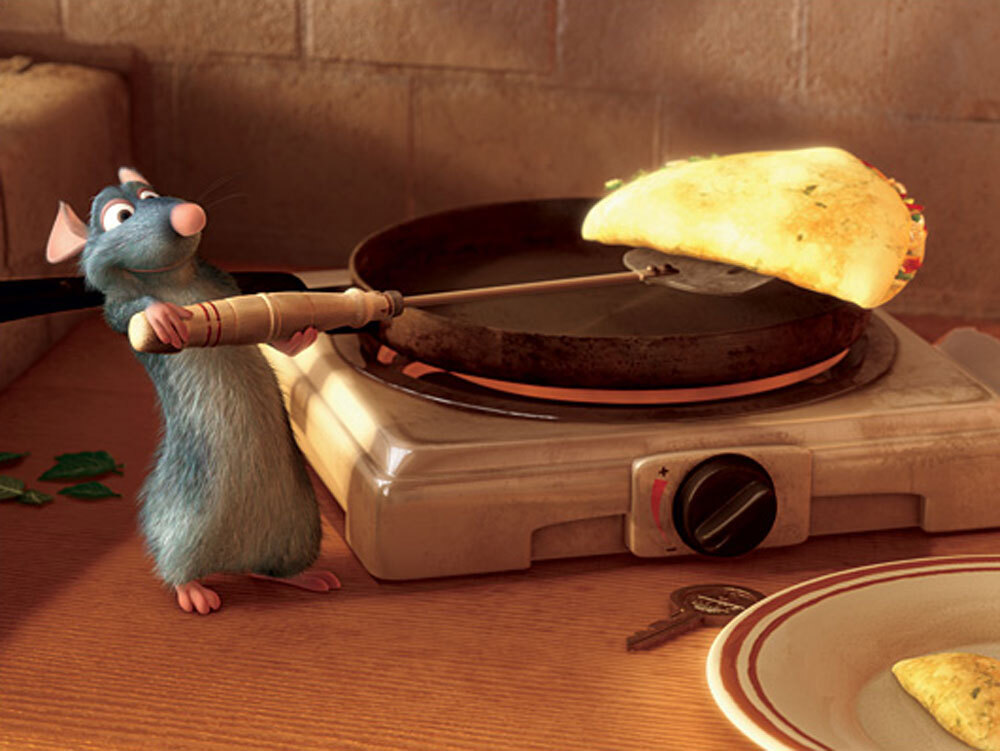 Rats to Riches: Remy (above) dreams of putting his gift of acute smell and taste to use by becoming a great chef.

Or taste in garbage, for that matter, in the Pixar comedy Ratatouille, where a budding chef named Remy (who happens to be a rat) gets very excited when his brother finds a stray bit of cheese to go with a mushroom he's been saving.

When Character Has A Flavor

Food is Remy's life, which you might say is a recipe for the most satisfying kind of food movie — one where cuisine isn't just eaten, but helps define character. As in, say, Ang Lee's Eat Drink Man Woman, where an otherwise undemonstrative Chinese chef creates magnificent meals for three painfully slender daughters who only pick at their food.

Or in Japan's Tampopo, where the quest for the perfect bowl of ramen noodles is a saga to rival The Magnificent Seven. And in Like Water For Chocolate, where a lovestruck senorita uses actual witchery in the kitchen to express her passion: When she throws rose petals and a secret ingredient into her pot, rooms burst into flames, and rivals ride off naked to join the Mexican revolution. Food has rarely been given such power on screen.

And while there have been a few other magical cinematic meals, none has ever been more magical than the 19th-century banquet lovingly prepared and exquisitely served in the Danish film Babette's Feast. 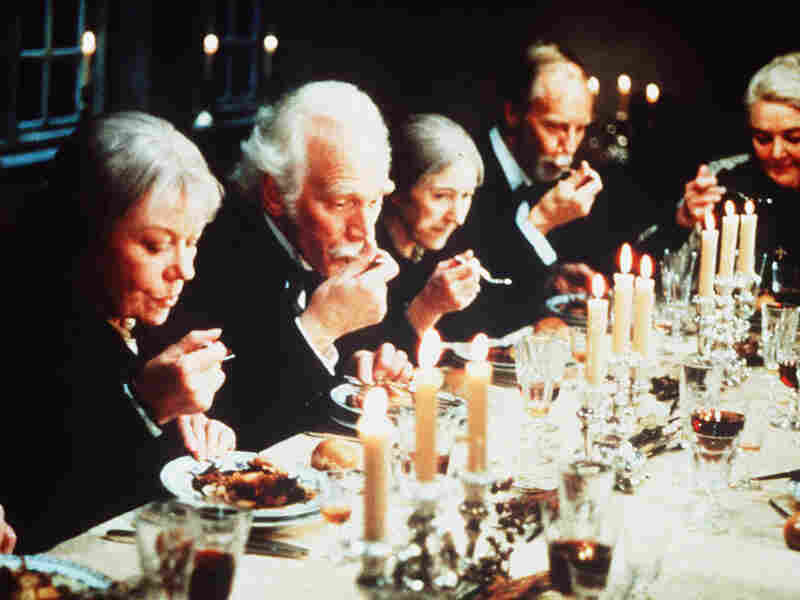 Pleasure and palates: When Babette's Feast premiered 20 years ago, French restaurants in select cities prepared the meal for critics. But though the food was delicious, the feast was more powerful on screen, where redemption has a seat at the table. Kobal Collection hide caption 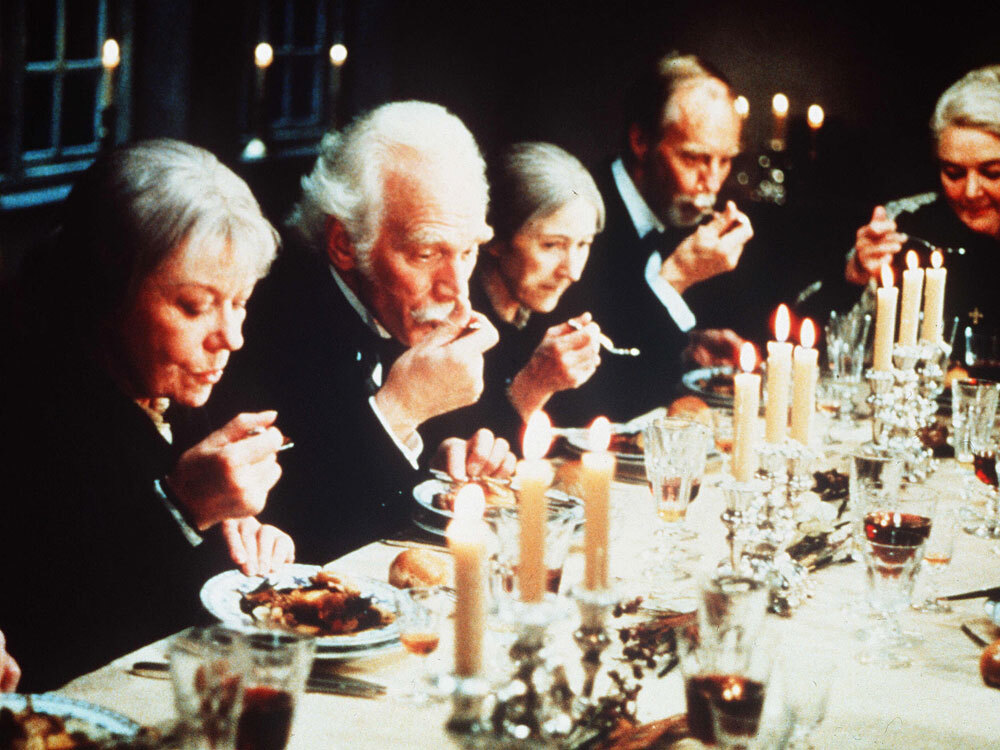 Pleasure and palates: When Babette's Feast premiered 20 years ago, French restaurants in select cities prepared the meal for critics. But though the food was delicious, the feast was more powerful on screen, where redemption has a seat at the table.

It's a French cook's extravagant "thank you" to a tiny church congregation that has sheltered her as a refugee in frigid Denmark for years. The problem is, the elderly congregation believes in self-denial — believes that pleasure must be reserved for the hereafter. So while they agree to eat the meal so as not to hurt Babette's feelings, they vow to each other that they will not enjoy the meal, or even talk about it.

This is much to the astonishment of a visitor, who can't believe what he's tasting — genuine turtle soup, great wine, and all around him, the congregation is silent. From the embarrassment in their expressions it's clear the others, despite their best efforts, are enjoying the meal, but no one in the congregation will admit it.

I was actually served Babette's feast 20 years ago, when the film premiered. The studio arranged with French restaurants in a few major cities to prepare the meal for critics. Nothing mock about the turtle soup, quail in puff pastry with foie gras and truffle sauce, astonishing French cheeses. Film criticism is its own reward, of course, but the rewards that day were a little more savory than usual.

Still, the feast did not top the movie. In the French restaurant where I ate it, the food was delicious but was still just a meal. In Babette's Feast, it's more, all tied up in the spiritual: food as a gift, specifically Eucharistic in nature, for a religious community that has denied itself pleasure for decades.

And it is transformative: old loves are rekindled, long-simmering feuds are forgotten, redemption has a seat at the table.

Fabulous. And — whatever the virtues of self-denial on-screen — probably not something you want to see on an empty stomach.