Accessibility links
Developing New Drugs for Infectious Disease A man infected with extensively drug-resistant tuberculosis remains in isolation in a Denver hospital, preparing to undergo surgery to treat his illness. One of his doctors discusses plans for treating him, his prognosis, and the state of new drug development for infectious diseases.

A man infected with extensively drug-resistant tuberculosis remains in isolation in a Denver hospital, preparing to undergo surgery to treat his illness. One of his doctors discusses plans for treating him, his prognosis, and the state of new drug development for infectious diseases. 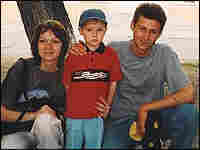 Robert Daniels with his wife, Alla, and their son in Moscow, before he returned to the United States. Courtesy KJZZ 91.5 FM hide caption

Timeline of a TB Diagnosis

The transatlantic trips last month of Atlanta attorney Andrew Speaker sparked an international public health scare. Speaker and public health officials disagree about what he was told about drug-resistant TB.

Atlanta lawyer Andrew Speaker may be the most well-known patient with drug-resistant tuberculosis in America, but he's not the only one. About 100 such cases are reported to U.S. health authorities each year.

Perhaps one in five patients with drug-resistant TB is ordered, like Speaker, to stay in the hospital until declared no longer contagious.

Take Robert Daniels, the second most-famous TB patient these days. He has extensively drug-resistant TB and is being held in an Arizona hospital under court order. His case raises even sharper questions about how to provide complicated treatment, protect the public, and prevent the spread of a dangerous new strain of TB.

Since last summer, Daniels has been locked in a bare room on the fourth floor of the Maricopa County Hospital in Phoenix. It's a jail unit for criminals who need medical care. But Daniels has never been charged with a crime. He's there because he's been judged a menace to public health.

While Daniels hates his incarceration, he said he enjoys the attention he has gotten lately. He ran down the list of news organizations that have called his cell phone lately.

Daniels is a 27-year-old drifter. Born in Russia, he immigrated to Phoenix with his parents as a boy. He drifted back to Russia a decade ago, where he caught TB — maybe in a jail cell serving time for marijuana possession; he's not sure.

"You could catch it anywhere. I just had a low immune system because I was, you know, partying a lot. I was young — too much beer, vodka, women, smoking," Daniels said.

After he got out of prison, he got sick.

"I started coughing and I felt really bad. They said, 'You've got TB.' I started taking medicine. Then I felt fine, and after a year I started spitting up blood," Daniels said.

In January of last year, his health worsening, he went back to Phoenix on an airplane.

He worked low-paying construction jobs and slept in his second-hand car. By mid-February his symptoms had worsened.

He went to an emergency room. Doctors found extensive lung damage and diagnosed drug-resistant TB. They put him in a residence for homeless TB patients.

Nurses watched him take his morning pills. They lectured him not to skip evening doses, taught him how to give himself intravenous medicine, and warned him to put on a face mask when he was in confined public spaces, like a store or bus.

Daniels admitted that he didn't.

But when public health workers asked him whether he wore a mask, he lied: "I already said that I was sorry. But that's not enough."

Daniels also didn't take a high-powered antibiotic when he was supposed to, leading to his becoming "extensively" drug resistant.

Now he feels trapped in a nightmare. He hasn't showered in months. He gets no exercise or fresh air.

"He's not seen the horizon, seen a tree, from his locked room for 10 months," said Dan Pochoda of the American Civil Liberties Union of Arizona. "He has a light on 24 hours. There's a video camera in the corner of the room that takes pictures of his every activity in that room 24/7. His mail is opened routinely.

"For most of the 10 months, he has not been allowed a TV or a telephone, and he has absolutely no activities during the day. It is taking, predictably, a terrible toll on his psyche. I believe it is not helpful for the physical treatments as well," Pochoda added.

There's no telling when, or if, treatment will make him non-contagious. Until that happens, he'll remain locked up.

The ACLU recently filed suit on Daniels' behalf. It doesn't seek to get him released — only to have him treated in more humane conditions.