Accessibility links
Electoral Ballots Begin Long Journey In Afghanistan Three weeks ahead of Afghanistan's presidential and provincial votes, some 35 million ballots are being shipped by plane, truck and even donkey to warehouses in the provinces. But the threat of Taliban-related violence means not every Afghan who wants to vote will be able to. 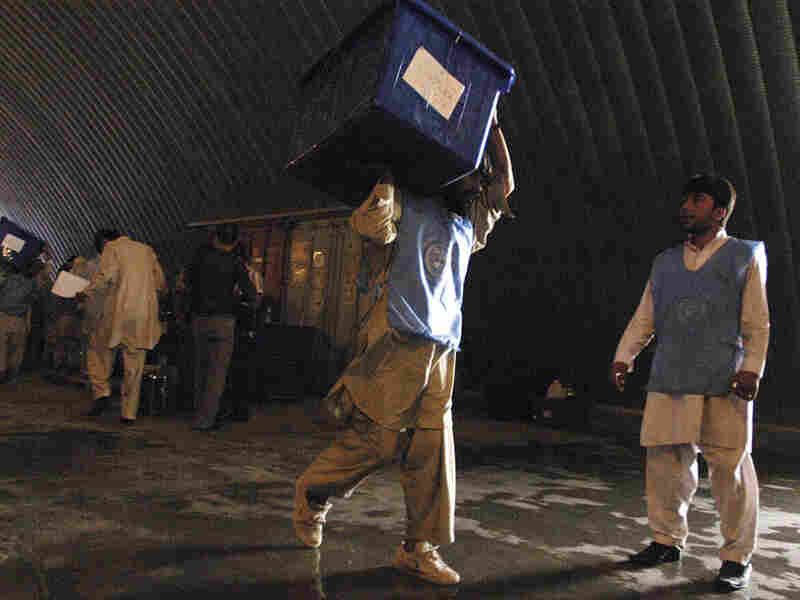 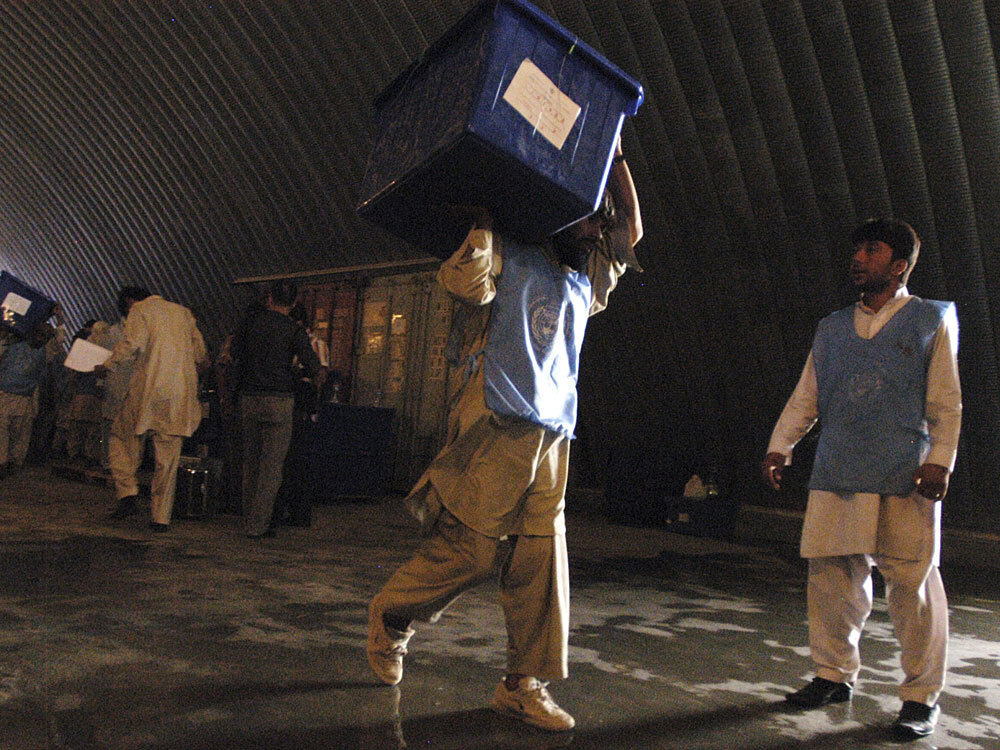 Election workers in Kabul carry ballot boxes to load onto trucks Tuesday for transport to polling stations throughout the country.

The Election, By The Numbers

Ballots: 35.8 million. Half are to select the country's president; the other half are for provincial elections being held at the same time.

Presidential candidates: 39, two fewer than originally signed up. More are expected to drop out.

Donkeys that will be used to carry polling stations to remote areas: 3,000

Polling stations each donkey can carry: 1

Three weeks ahead of Afghanistan's presidential and provincial votes, elections workers are in a frenzy to get polling stations up and running.

Some 35 million ballots are being shipped by plane, truck and even donkey to warehouses in the provinces. There, they will stay under lock and key until Afghan and Western security forces battling the Taliban give local election workers the all-clear.

Despite these measures, the volatility and threat of danger mean that not every Afghan who wants to vote will be able to.

In Kabul, in a noisy warehouse reminiscent of an airplane hangar, Afghan election workers roll pallets stacked with blue plastic bins to a row of tables. Other workers then stuff ballots into the bins.

They are locked with metal seals, each labeled with a number the workers mark on a computer-generated list.

Their goal is to prevent fraud. If the seals are tampered with along the difficult journey from election headquarters in Kabul to the 34 provinces, poll workers will know, says logistics supervisor Asmatullah Shahrani, who says his workers are putting in 12-hour days.

Daoud Najafi, Afghanistan's chief elections officer, says he is determined to stay on schedule so that citizens across his country can vote on Aug. 20.

"We have in all of our public outreach activity explained to the people of Afghanistan that if you are not happy with the current government, the election is the only way you can bring change peacefully," Najafi says.

But Kai Eide, the United Nations special envoy to Afghanistan, says gearing up for an election in a war-torn country where most voters live in remote villages is tough.

Many ballots are taken there by traditional Afghan "jingle" trucks adorned with metal chains that sound like wind chimes.

Eide says that more than 3,000 donkeys also will carry ballots to some of the more isolated regions in treks lasting as long as a week.

"These are the most complicated elections I've seen," Eide says.

It's not only complicated, but dangerous. A campaign worker for President Hamid Karzai's main opponent, former Foreign Minister Abdullah Abdullah, was shot dead Tuesday by an unknown gunman east of Kabul.

Privately, some U.N. officials predict voter turnout will be lower than hoped, especially in areas with many Taliban fighters.

John Dempsey, who heads the Kabul office of the U.S. Institute of Peace, says those fighters "could certainly try to destabilize certain areas and try to intimidate people into not voting, and making these types of threats may, in fact, lead people to say, 'Forget it, I'm not going to walk to the voting station that day. That's craziness.' "

Reports of a government-brokered cease-fire in the northwestern province of Badghis over the weekend were quickly dashed when a firefight erupted there between Taliban fighters and Afghan police.

Najafi, the top election official, says residents of at least eight districts in Afghanistan will not be able to vote in their areas because of the danger.

Most of those districts are in the south, although one is less than an hour's drive west of Kabul.