Accessibility links
Immigration Legislation Revived in Congress The immigration bill is back from the dead. On Friday, President Bush, speaking at the National Hispanic Prayer Breakfast, once again called on Congress to pass it. On Thursday night, Senate leaders agreed to return to the measure, perhaps as soon as next week. But there is no guarantee the legislation will get through — or what it will look like. 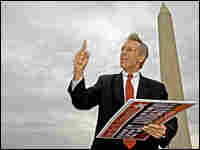 Not everyone welcomed the return of immigration legislation working its way through the Senate. Republican Representative Virgil Goode speaks near the Washington Monument during a rally sponsored by the Minutemen Project. Paul J. Richards/AFP/Getty Images hide caption 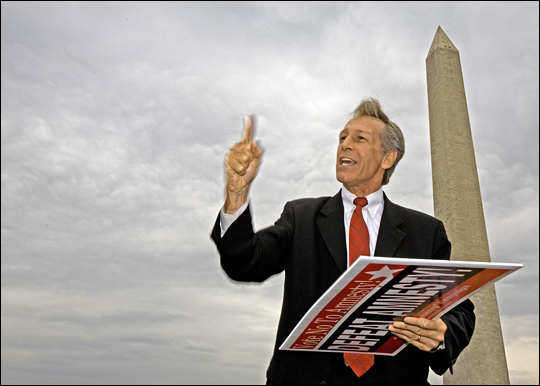 Not everyone welcomed the return of immigration legislation working its way through the Senate. Republican Representative Virgil Goode speaks near the Washington Monument during a rally sponsored by the Minutemen Project.

The immigration bill is back from the dead. On Friday, President Bush, speaking at the National Hispanic Prayer Breakfast, once again called on Congress to pass it. On Thursday night, Senate leaders agreed to return to the measure, perhaps as soon as next week. But there is no guarantee that the legislation will get through — or what it will look like.

The president told the Prayer Breakfast that each day that the nation fails to act on immigration, the problem only grows worse. Mr. Bush used religious terms as he appealed to lawmakers.

"We must meet our moral obligation to treat newcomers with decency and show compassion to the vulnerable and exploited," the president said, "because we're called to answer both the demands of justice and the call for mercy. Most Americans agree on these principles." He added, "Now it's time for our elected leaders in Congress to act."

The president's speech Friday morning came just three days after he made a rare appearance on Capitol Hill at a lunch with Senate Republicans, breathing new life into a process that had been all but left for dead. After a day of intense negotiations between authors of the Senate bill, Senate leaders from both parties issued a terse statement Thursday night saying the bill would be brought back to the floor.

Republicans had been insisting that they be allowed to offer a dozen or so amendments to the immigration measure. Sen. Ken Salazar (D-CO), one of the measure's sponsors, said it is still uncertain what those amendments might be.

"I think there is an agreement there will be 10 amendments," Salazar said. "Exactly what those amendments will be, and what's included in those amendments — I think [that] is something that will be talked about over the next week."

One amendment that appears all but certain to be offered: A provision, backed by President Bush, that would add $4.4 billion to the measure to immediately upgrade border security and enforcement.

The money is meant to address a main concern of conservatives — that securing the border take precedence over legalizing the status of the 12 million undocumented immigrants now in the U.S.

But opponents of the bill say the new spending still does not address their concerns.

"All the money in the world wont change policies," says Bob Dane, press secretary for FAIR, the Federation for American Immigration Reform. "It won't change the unwillingness of this administration to enforce the laws, and it will not change the fact that, if passed, this is an amnesty bill."

Another controversial amendment, pushed by conservatives, would require undocumented immigrants to return to their home countries before applying for legal status in the U.S. That provision is opposed by pro-immigration groups.

Sen. Jeff Bingaman (D-NM) says it is hard to know at this point if the bill has a chance of passing.

"They're going to agree to amendments by Republicans and amendments offered by Democrats," Bingaman said. "And we'll see which of those get adopted, and whether or not that's enough to get the votes to pass the bill."

The Senate is expected to spend most of next week working on the energy bill and will not return to the immigration measure until late in the week.

Business leaders, farmers, politicians and environmentalists — almost everyone in Texas' Rio Grande Valley is opposed to the federal government's plan to build a wall along a 135-mile stretch of the state's border with Mexico.

About 70 miles of the wall will be built through the Rio Grande Valley, and residents say it will change the character of their communities, disturb wildlife habitats and have an impact on the region's economy.

"On February 21, we met with director Chertoff in Laredo, and we told him firsthand of what we thought of the wall, and we told him it was not necessary. And he answered and said, 'You're right. We may need it in Arizona and New Mexico, but the Rio Grande River is a structure we need to work with,'" Salinas says.

Salinas says business and political leaders from the Rio Grande Valley were thrilled with Chertoff's response — that a virtual wall, consisting of cameras, sensors and boots on the ground was a viable alternative to a real wall.

Salinas says living on the Texas-Mexico border has given local residents perspective about the determination of Mexicans who cross illegally.

He points out a 16-foot fence that runs along the border next to one of the international bridges that connects South Texas and Mexico. He says the McAllen port director used to park his car on the U.S. side of the fence next to his office.

"And he had somebody at 1 o'clock in the afternoon jump that 16-foot fence and land on his vehicle. If people are willing to travel through the deserts of Arizona to work in the United States, you don't think they'll jump a fence? It does not make sense to spend this money this way," Salinas reasons.

The Rio Grande Valley is more than 80 percent Hispanic, but it is not just Hispanics who are opposed to the border wall.

"I'm white, I'm an Anglo, and I'm opposed to it," says Keith Patridge, executive director of the McAllen Economic Development Corporation. "I think there are other ways to protect the country."

The white power structure in the Valley — the Chamber of Commerce, the Farm Bureau and the conservative Rancher's Association are all opposed to the border wall.

"The way we see our community of McAllen and Reynosa, Mexico, is that we're one city that happens to have a river running through it. Not that much different than any city in the world, except that we have to go through Customs and Immigration every time we cross," Patridge says. "Families are on both sides of the border. Business and commerce activities are going back and forth. How would Washington, D.C., react if we built a wall along the Potomac River?"

An editorial cartoon circulating around McAllen shows a 20-foot high border wall running through town. On the Mexican side of the 20-foot wall is a store and a sign that reads, "Jose's 21-foot ladders."

Nobody seems to have any idea how to quantify the potential economic impact a 70-mile-long fence will have on the region, but economics is not the only concern.

"The biggest problem is the ecosystem. They're going to destroy an ecosystem that has been here for centuries," Noel Benavidez says.

Benavidez and his wife's family have owned land on the Rio Grande River near the town of Roma, Texas, since 1767.

Remember the Alamo? After that war was over, many Hispanic landowners along the Rio Grande had their land taken from them by force, but that did not happen in Roma, which is halfway between McAllen and Laredo.

Hispanic landowners were granted large portions — 17,000 acres. But now, the land could be taken after all. The border fence has been drawn to go right through Benavidez's land.

"I grew up around the river. I've been fishing here, I've been swimming, picnicking," Benavidez says. "You can come by the river and meditate. It's a beautiful, beautiful site. My granddaughter will never be able to do that if we have a wall. Is my son and daughter the last generation that will be able to enjoy the river?"

Benavidez complains that the fence is not going to be contiguous. It will run dozens of miles through populated areas and then stop when it gets to open country.

Then, it will pick up again in the next urban area. But in West Texas, open country is not measured in miles; it's measured in hours. Benavidez says it doesn't make sense to cut his land in two and cut him off from the Rio Grande. He points into the brush and at the path under his feet.

"We have a wall right now," he says. "There's sensors all over this place, and they're welcome to do that. They have always had access to this property. Probably, within the next five minutes, we're going to have a border patrolman come in here because we've set off a sensor. That's the type of wall we need."

But the Department of Homeland Security is committed to building a physical barrier.

Russ Knocke, spokesman for Homeland Security, says he understands there are a lot of concerns about the border wall and fence, but the department is on a mission.

"We have a mandate from Congress and the public to secure our borders, and we are going to be steadfast in fulfilling that mandate," Knocke says.

"In your metropolitan areas, we've learned through experience that fencing is more effective than technologies," he says. "Because that fencing slows someone down even by a few seconds before they can find their way to a house, a business, a car, some transpiration system and get away."

Knocke emphasizes that there is no final decision about exactly where the border wall and fence will be built. He says Homeland Security will listen to residents' concerns, but he is firm that walls and fencing are coming to South Texas.

That's a big concern to the biologists at the nearby Santa Ana National Wildlife Refuge.

"Santa Ana National Wildlife Refuge is a really special place," says Nancy Brown, with the U.S. Fish and Wildlife Service. The 2,088-acre refuge is considered the jewel of the national wildlife system, she says.

"You can get a 7-mile hike in, or you can do a half-mile and on either one you can see birds at Santa Ana that you can't see anywhere else in the country," she says.

There are more than 500 different species, and birdwatchers pump $125 million a year into the McAllen economy alone. Of course, it's not the birds that will be impeded by a wall or fence, but the birdwatchers.

Brown says the barrier is scheduled to go through two of the three National Wildlife Refuges down here.

"We have 70 miles of riverfront and we are federally owned. It has been stated that federal property will probably be designated as the first place to put fencing," Brown says.

And there is an endangered species of cat, the ocelot.

The ocelots once roamed from Arkansas and Louisiana across to west Texas. Now there are only 80 to 100 cats, most of them in South Texas.

The ocelots roam back and forth across the Rio Grande River. A fence might put an end to them. One way or the other, the border wall is going to test the adaptability of all kinds of creatures in South Texas.