Accessibility links
Brecker's 'Pilgrimage' a Welcome, Not a Farewell One of the most widely imitated saxophonists of the past four decades, Michael Brecker won widespread praise for his awe-inspiring technique and smooth tone. He also earned and maintained the respect of the jazz world while working successfully in the world of popular music.

Listen
Brecker's 'Pilgrimage' a Welcome, Not a Farewell 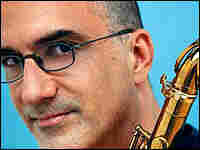 Don't Let Me Be Lonely Tonight

Still Crazy After All These Years

One of the most widely imitated saxophonists of the past four decades, Michael Brecker won 13 Grammys and widespread praise for his awe-inspiring technique and smooth tone. Perhaps most remarkably, he earned and maintained the respect of the jazz world — a world that's very picky with its affections — while working successfully in the world of popular music.

Brecker died Jan. 13 at the age of 57 from a rare blood disorder while putting the final touches on his new CD, Pilgrimage. The disc features a number of Brecker's longtime collaborators — including Pat Metheny, Herbie Hancock, Jack DeJohnette and others — who continue to celebrate his life and music in the months following his death.

Brecker arrived on the New York City music scene in 1969, a year when musical barriers were tumbling down. Rock groups were experimenting with jazz-like improvisations, while jazz bands were exploring rock and funk rhythms. To Ravi Coltrane, the son of jazz legend John Coltrane, Brecker's ability to improvise effectively in a variety of styles had a lot to do with timing.

"Michael came out during a time when there were all these strands of music happening," Coltrane says. "Funk, rock and soul music — he found a way to make his sound work within all those genres."

Coltrane knew Brecker as a friend, as well as a major influence.

"I began studying the saxophone in the '80s, and there were a few modern-day saxophone players that most people focused on," Coltrane says. "For those followers of Michael, it demanded another caliber of focus and study."

Brecker's approach to his instrument was about more than just awesome technique. He brought an intense passion that owed much to his own source of inspiration: John Coltrane.

"Michael Brecker is one of the most complete saxophonists of the post-John Coltrane era," says Ravi Coltrane. "What I mean by complete is he not only understood the emotional and spiritual content of Coltrane's music; obviously, he also dealt with it on a technical level."

Brecker straddled opposites. He was extremely gifted and extremely humble. He could have formed his own band when he was in his 20s, yet he waited until he was 37 to step out as a leader. He was an acoustic jazz purist, and still he explored new electronic instruments, as he explained in 1987.

"My scope is very broad and I like a lot of things," Brecker told NPR host Ben Sidran. "But there are times that I feel like an anachronism. I'm constantly discovering more things that the acoustic saxophone can do. I don't feel it's been pushed to the limits yet."

From 1970 on, Brecker was a leading session musician playing on hits by hard-rock groups, funk bands and pop stars, while working as a member of jazz ensembles like the Brecker Brothers and Steps Ahead. He integrated his saxophone sound into a wide variety of radio hits by James Brown and Aerosmith, Bruce Springsteen and Paul Simon.

"I remember it vividly," guitarist Pat Metheny says. "I was driving by a major intersection in my town. On the radio was the James Taylor single 'Don't Let Me Be Lonely Tonight' with this tenor player on it. And I remember I had to pull over... Then I found out, 'Oh, that's Michael Brecker.'"

Brecker and Metheny played together on a number of recordings — including Metheny's breakthrough album 80/81 — and this past August, Brecker asked Metheny to join him and an all-star lineup to record a new album. He also invited keyboardists Herbie Hancock and Brad Mehldau, bassist John Patitucci and drummer Jack DeJohnette.

It was a small miracle the recording session even happened. For nearly two years, Brecker had been battling a rare cancer of the bone marrow. A transplant from his daughter enabled him to return to the studio. Brecker called the album Pilgrimage, and it turned out to be his last: He died shortly after putting the final touches to the CD.

"Knowing what he's been through this year... I mean, playing saxophone is hard. It's a very physical activity," Metheny said during the recording of Pilgrimage. "I'm really just thrilled."

"He sounds better than ever. I would say that there's a new component in Mike's playing after all of this, a certain kind of seriousness that he's putting into each gesture. Not that it's ever lacked those things, but there's yet another layer to it."

Musicians list the components of Brecker's signature sound: His rich tone. His fluid and lyrical flow. His recent growth as a composer. On Michael Brecker's musical farewell, one can hear all these things. What you can't hear is a sense of goodbye — Pilgrimage stands as one of the most energetic and welcoming albums of his career.

Ashley Kahn is the author of The House That Trane Built: The Story of Impulse Records.

It's a bittersweet exercise to consider a comprehensive overview of a nearly 40-year career when it comes to a premature end. It's also daunting in Michael Brecker's case, given his voluminous output. What follows are the recommended crests of his recordings, divided into his work as a member of jazz-rock groups, as a pop/rock session man, as a featured guest on various jazz albums, and as a leader in his own right.

The Band Member: Most of Brecker's recordings with pioneering jazz-fusion outfits like Dreams (an early-'70s group that Miles Davis was rumored to have checked out) and the Brecker Brothers (which made its debut in '74) have fallen out of print. A worthy best-of CD of the latter group is Sneakin' Up Behind You, a fun and revealing compilation that includes Brecker's standout track "Funky Sea, Funky Dew." Steps Ahead — a furthering of the fusion formula that blended jazz, funk and rock inspirations — was founded in 1979 by vibraphonist Mike Mainieri with Brecker as an original member; its 1983 self-titled release was reissued on CD in 2004 and is worth hunting down.

A shared reverence for John Coltrane's enduring contributions was the raison d'etre for two recent groups that included Brecker. Each yielded a stunning recording: Directions in Music's Live at Massey Hall (2002; with keyboardist Herbie Hancock and trumpeter Roy Hargrove) and Saxophone Summit's Gathering of Spirits (2004; with fellow saxophonists Dave Liebman and Joe Lovano).

The Session Man: Creative distillation was an inherent part of Brecker's genius: an uncanny ability to construct custom 20-second solos that fit as seamlessly into pop, rock and funk songs as his longer improvisations did in extended jazz jams. Five solos that bear out this aspect of his legend: James Taylor's "Don't Let Me Be Lonely Tonight" (1972), Aerosmith's "Same Old Song and Dance" (1974), Paul Simon's "Still Crazy After All These Years" (1975), Donald Fagen's "Maxine" (1982) and Cameo's "Candy" (1986).

The Guest: Ask any number of musicians to name their favorite jazz album featuring a Brecker appearance, and as many responses will be offered. Among the albums most often mentioned: Horace Silver's In Pursuit of the 27th Man (1970), Chick Corea's Three Quartets (1981), Pat Metheny's 80/81 (1981), McCoy Tyner's Infinity (1995), and Elvin Jones' The Truth (2004).

The Leader: Brecker's output as a leader numbered a little more than a dozen after he finally stepped out on his own at the age of 37. Cityscape (1983) married Brecker's lyricism to the lush string arrangements of Claus Olgerman. Tales from the Hudson (1996) and Two Blocks from the Edge (1997) comprise a stunningly confident and constantly inventive one-two punch in his discography. Nearness of You (2001) successfully matches Brecker's modern sensibility with the standards of yesteryear. Despite its unintended role as his swan song, Pilgrimage (2007) carves a wide emotional swath with an all-original collection of tunes. Clear proof that as a composer, Brecker was still finding himself.