Accessibility links
Defense Secretary Gates Visits Iraq Defense Secretary Robert Gates, who is on a short swing through the Middle East, was in Iraq on Tuesday. On his agenda: a visit to a command post in southern Iraq where U.S. troops serve in an advisory capacity; a meeting with Prime Minister Nouri al-Maliki and a visit to Kurdistan.

Defense Secretary Robert Gates, who is on a short swing through the Middle East, was in Iraq on Tuesday. On his agenda: a visit to a command post in southern Iraq where U.S. troops serve in an advisory capacity; a meeting with Prime Minister Nouri al-Maliki and a visit to Kurdistan.

It's been almost a month since U.S. combat troops pulled out of Iraqi cities. Iraqi forces are now in charge in Baghdad and elsewhere. And today Defense Secretary Robert Gates flew in to see for himself how the new arrangement is working. The secretary says so far, so good.

Secretary ROBERT GATES (Department of Defense): I think three and a half weeks into this process, no one could've expected it to go any better.

SIEGEL: NPR's Mary Louise Kelly is traveling with the secretary of defense and she's on the line now from Camp Victory in Iraq. Mary Louise, it sounds like from what Secretary Gates had to say, that the handoff to the Iraqis, at least according to the U.S., has gone well.

MARY LOUISE KELLY: That's certainly the sense that U.S. commanders have. I mean, Secretary Gates was saying today his sense is that things are a lot more equal now, that nobody is the boss, nobody is the occupier anymore, that Iraqis seem to feel much more empowered, now that this hand off has occurred. So, they are really, you know, the goal now is trying to figure out how you get U.S. forces to make this shift into frontline combat roles.

And we were taken today, for example, at Tallil Airbase, which is in southern Iraq, to see this new joint operation center. They just opened it up this month after the handoff. And the idea is you've got this big room, you've got Iraqis sitting on one side and everything on their side is in Arabic. The maps are all in Arabic. You have the Americans sitting on the other side. Everything is, of course, in English. But the idea is they are all at least in the same room. So that, at this point, is progress.

SIEGEL: But for all of the reports of progress and good news, we hear about more violence, more car bombs. Have Iraqi forces really been able to step up to the job that the U.S. has stepped back from?

KELLY: It's still obviously an open question and of course the violence is ongoing. We were told from General Ray Odierno, the top U.S. commander here in Iraq, that this month's overall incidents are apparently down. Casualties for U.S. troops are down. So the indicators are going in the right direction. But yes, everyone we've talked to today, Iraqi and American, will tell you that there is a lot to get done between now and the end of 2011. And the end of 2011, of course, is when all U.S. troops are supposed to be out of Iraq.

KELLY: He did. And the official line is still that the security agreement that has been signed between the U.S. and Iraq says U.S. troops will be out at the end of 2011, and Secretary Gates says we will abide by that one. But for all that, it is still a very open question. I asked about this at a press conference today here in Baghdad. And interestingly, neither Secretary Gates nor the Iraqi defense minister would rule out that U.S. troops may well still be in Iraq past 2011.

SIEGEL: Just quickly, Mary Louise, there's been a lot of concern recently about tensions between Kurds in the north of Iraq and Iraq's Sunni Arabs. Did that come up today?

KELLY: It did. Both U.S. officials and Iraqi officials will tell you that is now the primary security concern here in Iraq. And that's very much going to be on the agenda tomorrow. Secretary Gates flies out from Baghdad. He's heading up north to Erbil. He's going to be meeting with the newly reelected Kurdish regional government president, President Barzani.

He's going to be delivering the message: We're here to support you in every way we can, but the clock is ticking. U.S. forces are in Iraq for a finite period to help ensure security. And he would like to see some progress made in resolving some of these tensions. 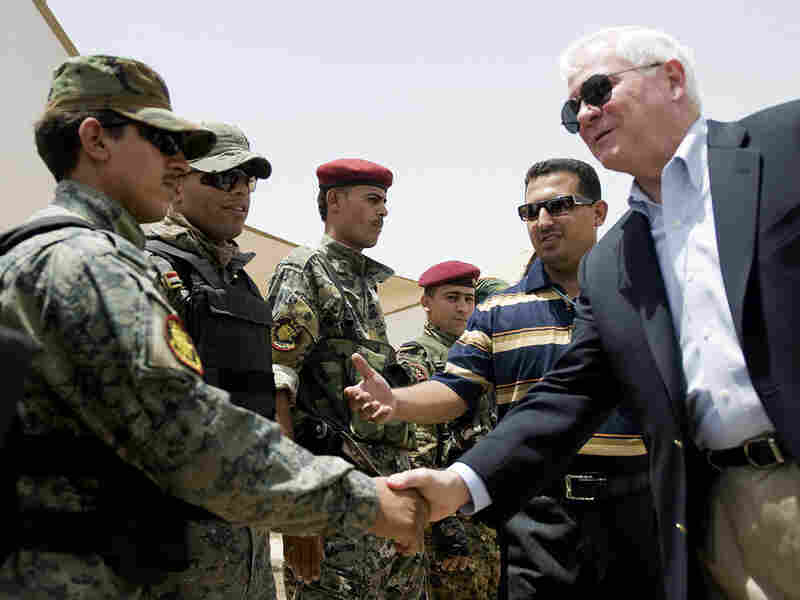 Defense Secretary Robert Gates greets Iraqi soldiers at a base in Talil, Iraq, where they serve with American troops. Gates is on a two-day visit to Iraq. Jim Watson/AFP/Getty Images hide caption 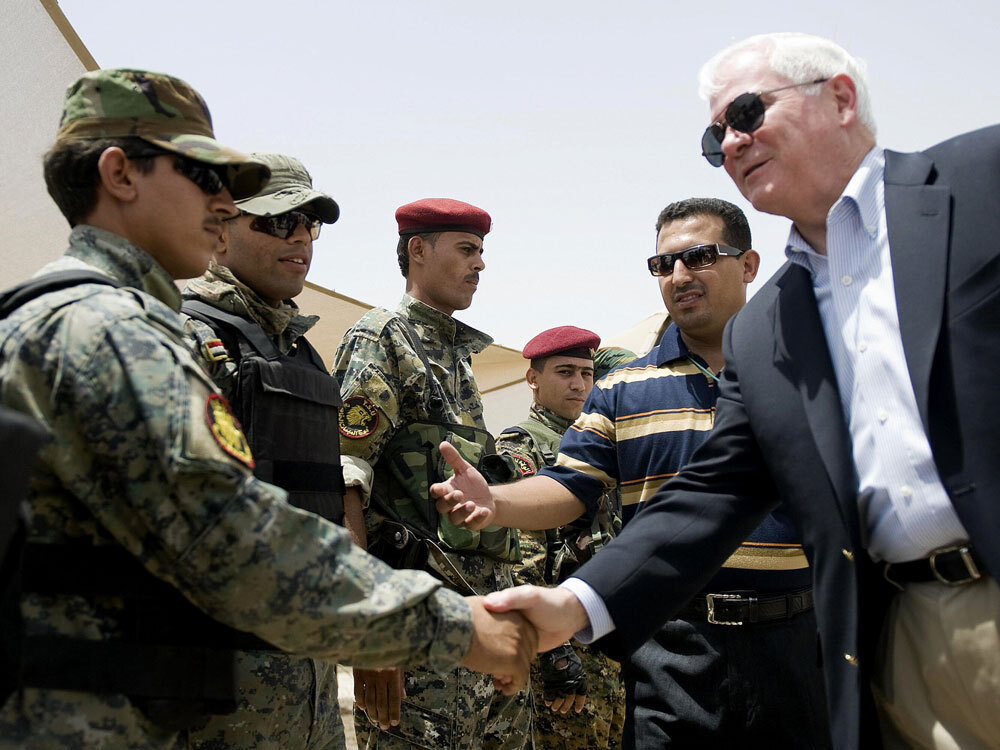 Defense Secretary Robert Gates greets Iraqi soldiers at a base in Talil, Iraq, where they serve with American troops. Gates is on a two-day visit to Iraq.

Defense Secretary Robert Gates is paying an unannounced visit Tuesday to Baghdad for talks that are expected to include rules of engagement for U.S. troops as they try to wind down their involvement in Iraq.

The trip is expected to include a visit to Iraq's Kurdish region, where tensions between Kurds and Arabs have been growing over oil-rich territory in the country's north.

Gates flew Tuesday from Amman, Jordan, to a U.S. command post in Talil, in southern Iraq. The post is considered a model for U.S. troops as they shift from direct combat to advising and supporting Iraqi forces.

"What you are doing here is the next phase of our progress in Iraq," Gates told the American soldiers. Speaking of the new relationship between U.S. and Iraqi troops, he said, "nobody's the boss or the occupier."

Gates' visit comes just days after an incident in which an Iraqi army officer detained U.S. soldiers who killed three Iraqis during a firefight. The incident pointed up friction between U.S. and Iraqi government forces as the Americans pull back to bases outside Iraqi cities.

U.S. military officials say the brief standoff occurred July 21, when a U.S. convoy came under fire in the Abu Ghraib area west of Baghdad. The three Iraqi dead included one man described as a bystander.

Iraqi Prime Minister Nouri al-Maliki, who was visiting the U.S. at the time, made a point of saying that the Americans were entitled to defend themselves and that the Iraqi officer who sought to detain was "wrong" and "out of line."

"I don't think [Gates' visit] is going to be a showdown," said Max Boot, a senior fellow at the Council on Foreign Relations, "just a question of working out the operational details" of Iraqi and U.S. forces working together.

Boot said Gates still has a fair amount of leverage with the Iraqi government. "We're still providing services that the Iraqis desperately need," he said. "I don't think Maliki or the Iraqi military wants us to leave prematurely."

Kimberly Kagan, the president of the Institute for the Study of War, points out that Iraq is at the start of an election campaign, and some Iraqi rhetoric against the U.S. forces is political theater.

"We need to be attentive to the fact that a lot of Iraqi politicians are posturing for the Iraqi electorate," she said.

Kagan, who returned from a trip that included five days in Iraq, said that while the press plays up fiery exchanges between Iraqi officials and the U.S., "the reality on the ground is much more stable." She predicts that "at a practical level, [Gates] will see that American and Iraqi troops are working things out."

One other source of worry that Gates is likely to discuss is the growing tension between Kurds and Arabs in Iraq's north. Daniel Serwer, who studies post-conflict societies at the United States Institute of Peace, said Americans have been playing a crucial balancing role between the two sides.

"There comes a time in the withdrawal process when the Americans are going to have to let go," Serwer said, but he added that it will take a lot of confidence in the two sides before the U.S. can do that.

"I wouldn't be surprised if Gates says [to Iraqi officials], 'I can't keep my troops up there in this confrontation zone indefinitely. You have to be thinking about that,' " Serwer said.

The Kurdish region just held a long-delayed vote for a regional president and parliament on Saturday. Initial results show that a new opposition bloc made an unexpectedly strong showing, although the main Kurdish parties are expected to remain in power.

Kagan said she thinks the defense secretary will see that the U.S. military has been largely successful in preparing Iraqi forces to take over security, especially in the cities.

"The next issue is what will be the partnership between the U.S. and the government of Iraq now that this security transition has taken place. There's actually a fair opportunity for Iraq to be a major strategic partner in the region," she said.