Accessibility links
Australia's Camels Thrive on Climate Swings An estimated 1 million wild camels roam the Australian outback, and their population is expected to double in a few years. Above-average rainfall in the desert has increased the vegetation available to the animals. 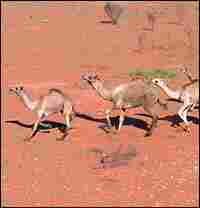 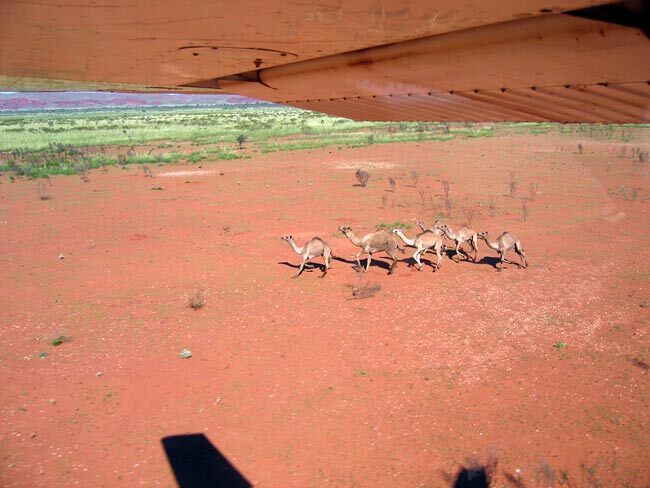 Robin Mills, a rancher at Warrawagine Station, says more and more wild camels, like these seen from a plane, are wandering onto his property in search of water. 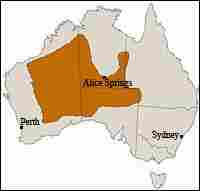 Australia is home to more wild camels than any other country on earth. A map shows the concentration of Australia's camel population. Australian Government Publishing Service hide caption 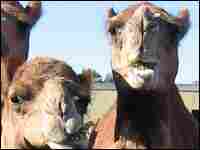 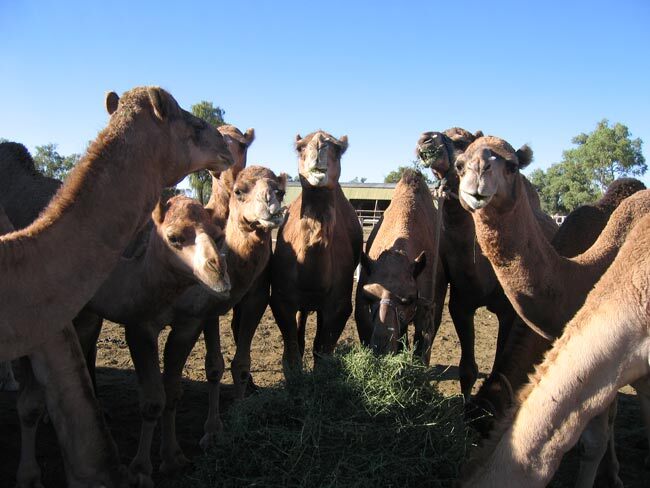 Tourists can get a close look at camels at Frontier Camel Tours just outside Alice Springs in central Australia.

There are many exotic species native to Australia: The kangaroo, the koala, the kookaburra. But the camel is not among them.

Australia is now home to more wild camels than any other country on earth. An estimated 1 million of them are starting to push out of the desert and into populated areas and ranchland.

Camels were brought to Australia in the 19th century by European explorers and were used to "carry heavy loads to cross the dry and inhospitable lands," a video tells tourists outside Alice Springs in central Australia, where an hour-long camel ride costs about $50.

The arrival of motorized transport in the 1920s made the camels obsolete. Shipping them back to India and Pakistan was too much work, and many of the animals were killed. But a few thousand or so were turned loose and left to fend for themselves in the desert.

In another context, this might seem cruel and inhumane. But for the camels, it was pretty close to divine intervention.

"The Australian continent was heaven for camels," says Neil Burrows, science director at the Western Australia Department of Environment and Conservation.

They essentially have no competitors, he says.

"No predators, no threats, no disease," Burrows says. "They have to do the normal battle with the whims of weather, namely access to water is an issue. But because of their ability to travel long distances and to go long periods without water, they overcame that limitation, which most animals can't."

Some scientists say camels may be even better adapted to life in the outback than Australia's iconic desert species, the red kangaroo.

"When a drought hits red kangaroo populations, you have massive mortality across all age classes, and you see massive decline in the population," says Glenn Edwards is principal scientist for the Northern Territories Park and Wildlife Service based in Alice Springs. "So red kangaroo populations go up and down dramatically with the good and bad seasons, but we don't see that with the camels."

And there have been far fewer bad seasons recently, according to Burrows.

Their populations have increased, which has had "an enormous impact" on vegetation during drought periods, which are common in the desert, Burrows adds.

Robin Mills, a rancher at Warrawagine Station, about 1,000 miles west of Alice Springs, says that more and more wild camels are wandering onto his property, tearing down fences and smashing troughs to get at water.

So far, Mills says, his camel problem is more of a nuisance than a real threat. But he expects things to get worse in a hurry for ranchers and the desert ecosystem.

The Park and Wildlife Service's Edwards is also worried about what might come next:

"Possibly the extinction of some plant species. Possibly the disappearance of some wildlife species out of our deserts. And let's remember that the Australian deserts cover the majority of our country. So it's a reasonably serious issue, which will probably get worse with time unless we turn it around."

The Australian government has set up a commission to study the problem and find a way to solve it. Large-scale culling is one option being discussed. Exporting camels for meat is another. But neither is economically viable at the moment.

And time, those studying the problem say, is running out — with Australia's wild camel population set to double in the next eight years.