Accessibility links
Does the Internet Undermine Culture? The Internet is transforming the economy and the culture. Is it for the best? Andrew Keen, author of The Cult of the Amateur: How Today's Internet is Killing Our Culture says the consequences of the digital age need to be managed.

Listen
Does the Internet Undermine Culture?

The Internet is transforming the economy and the culture. Is it for the best? Andrew Keen, author of The Cult of the Amateur: How Today's Internet is Killing Our Culture says the consequences of the digital age need to be managed.

Former Internet enthusiast and entrepreneur Andrew Keen has taken a U-turn. He now believes the current incarnation of the Internet threatens the values, the economy and the creativity of our society. And he's written a book about it. The book is called "The Cult of the Amateur: How Today's Internet is Killing Our Culture."

Andrew Keen joins us from member station KALW in San Francisco. Thanks for being with us.

Mr. ANDREW KEEN (Author, "The Cult of the Amateur: How Today's Internet is Killing Our Culture"): Thanks for having me.

YDSTIE: Well, first of all, let's just make sure we're on the same page here. Your indictment is, again, what's probably called Web 2.0, which includes things like YouTube, MySpace, Wikipedia and Google. Overall, just give us a brief description of the problem you have with this interactive version of the Web.

Mr. KEEN: My problem is that it fundamentally undermines the authority of mainstream media. We think two things going on simultaneously, the rise of the user-generated content, which is unreliable enough and corrupt, and a crisis in professional journalism, professional recorded music, newspapers, radio stations, television and publishing. And that is the core of our culture.

Once we undermine the authority and expertise and professionalism of mainstream media, all we have is opinion chaos, a cacophony of amateurs.

YDSTIE: One of the things you criticized about the Web is the lack of cultural gatekeepers. But, you know, I think cultural gatekeepers often been viewed as a pejorative term. They are those people who believe they know what's best for us. But they're often protecting entrenched interests who happen to be rich and powerful.

Mr. KEEN: That is a neo-Marxist argument - the idea that everyone who holds power is pursuing some sort of class or economic interest. I think the majority of editors at newspapers, agents and publishers at our big publishing houses, people in Hollywood, are doing the best job they can. They have a great love and respect for music and movies and news.

And I simply don't buy the idea that this so-called elite - and this is an elite through meritocracy, not through birth - are somehow pursuing specific corrupt agendas. I think that, actually, the blogosphere and the flattened Web 2.0 media will reflect that. And I think that the split(ph) behind the so-called democratization of this media is a new oligarchy. But the trouble with this oligarchy is it's anonymous. We don't even know who the people are.

YDSTIE: What about the argument, which was the basis for another well-received recent book that there is wisdom in the crowd that goes beyond what any individual or small group can offer?

Mr. KEEN: Yeah. That's a good book - the James Surowiecki book. I don't buy it. I mean, I think that in cultural terms and in information terms, I prefer the wisdom of the professional. And for people who are in doubt, look at Wikipedia and then look at Britannica, look at the blogosphere, and then look at newspapers.

YDSTIE: Let me ask you, though, about the popular music scene, because I hear from a lot of musicians that they're happy that they can get their work out on the Internet because the gatekeepers that were keeping them from getting on or the hurdles that they had to cross in order to get a big company to back them were just too great.

Mr. KEEN: There are some examples, I think, of successful music acts who have made it on the Web. Arctic Monkeys is one. But, again, I think that the kind of musicians and, indeed, artists who are going to make it on the Web are people who are skilled in sales and marketing. They're not necessarily the people who are most able.

YDSTIE: What about the argument that this whole thing is just creative destruction in capitalism and it's going to happen and ultimately it will lead to something that's better and more efficient?

Mr. KEEN: I don't want to encourage a technological determinism where we simply sit back and say what will be will be. We created this technology. We need to manage its consequences. I think it throws up some very, very interesting issues. For example, Chris Anderson, the author of "The Long Tale", was asked about the impact of Amazon on independent bookstores. As I'm sure many of your listeners know, independent bookstores are closing. They're in big trouble, just like independent record stores, as a consequence of the Internet.

In response, Anderson said that the death of the independent bookstore was what he said - and I'm quoting him here - "the road kill on the way to this digital nirvana." I think we need to reevaluate some of or cultural institutions. If bookstores or newspapers or encyclopedias are road kill, then what kind of society is this Web 2.0 world actually leading us to?

YDSTIE: Andrew Keen is author of "The Cult of the Amateur," an indictment of the current state of the Web. He joined us from member station KALW in San Francisco. Thanks very much. 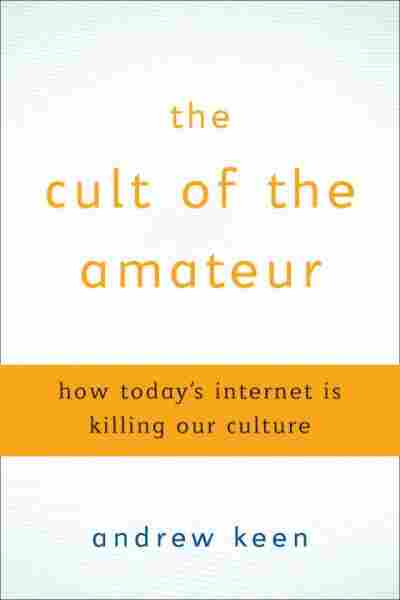 The Cult of the Amateur

How Today's Internet is Killing our Culture