Accessibility links
Jellyfish May Help Keep Planet Cool Researchers believe that some small marine creatures may help curb global climate change. A new study suggests that jellyfish and creatures like them play an important role in circulating ocean waters, mixing nutrients, and helping to reduce CO2 levels in the atmosphere.

Jellyfish and other related creatures may be helping to reduce the effects of climate change by stirring up the oceans, according to a new study in this week's issue of the journal Nature. 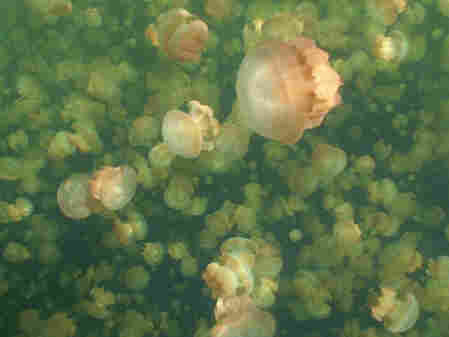 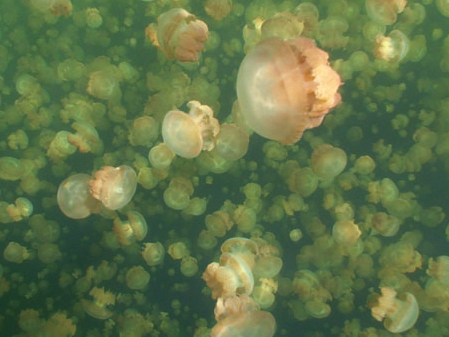 A cloud of Mastigas jellyfish hover in Palau's Jellyfish Lake.

Made visible by fluorescent dye, water moves with a swimming jellyfish.

A researcher squirts fluorescent ink in the path of an oncoming jellyfish.

The finding is the latest in a decades-old debate over whether swimming animals can contribute significantly to ocean mixing, the process by which warm water on the surface combines with the cold water far below. Mixing plays a role in global climate change because carbon dioxide in the air above oceans dissolves in the surface water. Through mixing, it can get pulled into the depths and stored there for long periods.

The process is also a key regulator of the Earth's temperature and the ocean's nutrients. "It's important for us to understand the dynamics of the ocean in order to really understand what's going to happen to climate over land," says John Dabiri, a bioengineer at California Institute of Technology in Pasadena and co-author of the paper.

Tides and winds are known to be major players in ocean mixing, but some researchers believe that animals might also contribute. Dabiri and his graduate student Kakani Katija decided to find out by filming dozens of jellyfish as they swam in the wild. Studying the movies shows that the simple animals drag water behind them as they swim. It's a little bit like a bicyclist in the Tour de France, says Dabiri: "When Lance Armstrong is riding down the road, he's actually taking quite a bit of the surrounding air along with him, and the animals are doing something similar in the water."

To avoid predators, jellyfish and related animals often hide far below the ocean's surface during the day and swim to the surface at night to feed, according to William Dewar, an oceanographer at Florida State University in Tallahassee who was not involved with the study.

If the work is correct, then it could mean that they're ferrying cold water to the surface and warm water into the depths of the sea with each feeding cycle. In the process, they may be taking dissolved carbon dioxide with them far beneath the sea, changing the overall carbon balance in the atmosphere.

But, Dewar adds, there's a still a long way to go before scientists can say for sure that animals like jellyfish are helping to regulate the climate. Larger-scale studies need to be carried out to understand where marine animals are living and how they move. "What I think we can say at the moment is that it's a plausible idea," he says.

A previous Web version of this story incorrectly referred to "Caltech University." The correct name is California Institute of Technology.