Accessibility links
Foreign Policy: Who Knows The Middle East? Commentator Marc Lynch wonders how the wars in Iraq and Afghanistan will shape the way we study the Middle East in the years ahead. How does fighting in a country shape your knowlege of the place vs. studying it in an ivory tower? 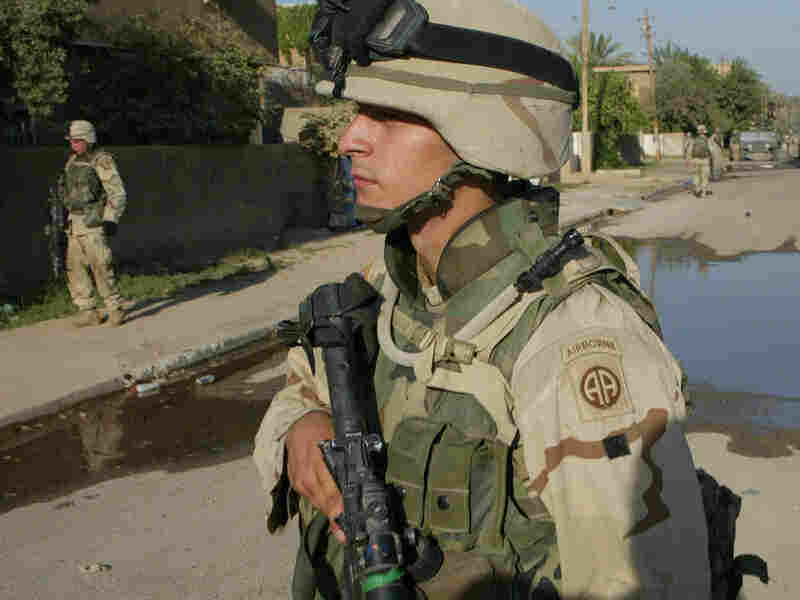 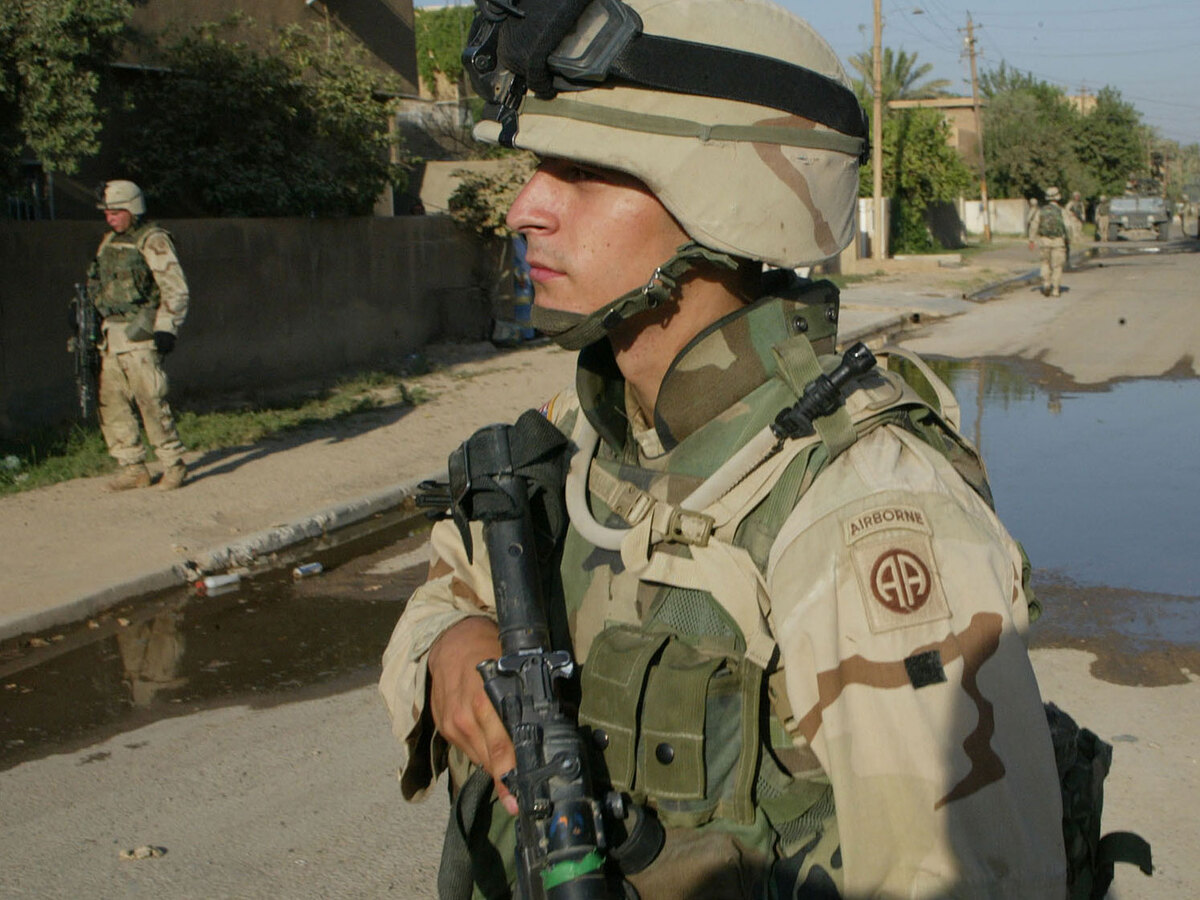 U.S. soldiers from the 1st Armored Division search a neighborhood following an early morning rocket-propelled grenade attack in al-Khadra'a, west of Baghdad, Iraq, Monday, July 14, 2003. One soldier was killed and six others wounded in the attack on an army convoy Monday. (AP Photo/

This morning I stopped by the Carnegie Endowment for International Peace for the Washington D.C. launch of the 2009 Arab Human Development Report. Since I have an article coming out in the next day or two about that, I'll refrain from saying anything about it now. Over lunch, I talked at length with Tom Friedman of the New York Times about his recent column from Kandahar, in which he wrote:

"All those deployments have left us with a deep cadre of officers with experience in Iraq and Afghanistan, now running both wars from generals to captains. They know every mistake that has been made, been told every lie, saw their own soldiers killed by stupidity, figured out solutions and built relationships with insurgents, sheikhs and imams on the ground that have given the best of them a granular understanding of the "real" Middle East that would rival any Middle East studies professor."

This is something I've thought about a lot, especially since agreeing to take over as the director of the Middle East Studies program at the Elliott School of International Affairs. Graduate programs in political science and Middle East Studies have already begun to see a steady flow of applicants back from Iraq (including, among many others, my research assistant from last year). I expect that over the next decade, this will turn into a flood as smart, young veterans look to put their experiences into a broader perspective and to apply their hard-won granular knowledge to broader academic and policy problems. (And not only military veterans — there are plenty of civilians, contractors, and NGO workers who have worked in Iraq as well.) Most will pursue MA degrees, while some percentage will decide to continue on to a Ph.D. I think this an unequivocally good thing — and I wonder if people have given serious thought to how it might change the field of Middle East studies.

I've met a lot of these officers over the last few years, and have frequently been deeply impressed with them. A remarkable number of my students at Williams College (and later from George Washington) chose to serve in the military after graduation in the post-9/11 period (and some, like the much-missed Nate Krissoff, didn't make it back). There is absolutely no reason why such officers and soldiers wouldn't choose to pursue advanced degrees, or succeed brilliantly when they do.

When they enter academic programs, these veterans will (and already do) bring a great deal of on-the-ground experience to the classroom and to their research. Many will (and do) enter their programs with far more advanced language skills than did earlier generations of students, although perhaps with more familiarity with colloquial spoken dialects than with Modern Standard Arabic (reversing a common traditional pattern). Their point of reference will be (and is) Iraq and the Gulf, not Israeli-Palestinian affairs, Egypt, Jordan, Lebanon, or other areas where a great number of current faculty began their encounters with the region. And they will have much greater familiarity and comfort with military and security issues than do many currently in the field.

I doubt that the main effect will be to push the field to the "right", as I've heard suggested. The officers I've met are all over the map politically and in terms of their intellectual aspirations. Indeed, I'd guess that the bias would be towards pragmatism and empiricism, and against any kind of ideological doctrines. And at any rate, the allegations of the politicization of Middle East Studies — particularly political science — have always been wildly exaggerated. How the critics of the "Human Terrain Program" over in Anthropology might react, I admit I don't know...

That's not to say that there might not be depressing misperceptions on both sides. I've had a few soldiers interested in pursuing degrees ask me nervously whether they would be shunned by academics. I would be shocked if any experienced prejudice or bias because of their war service — certainly not at a place like GWU — and would be appalled if they did. I certainly hope that such concerns wouldn't stop them from applying. I suppose there's a chance that some faculty might feel threatened by students from such a background — but those are probably professors who have trouble in other areas as well, frankly. Constructive argument and productive friction between people with very different backgrounds, perspectives and knowledge should enrich and even electrify a well-run classroom, not cause problems. That's a good, not a negative.

To succeed, of course, this new generation will need to be open to engaging with the academic literature and to learning from faculty and fellow students with very different forms of experience, expertise, and methodological approaches. Academic work is different, with its own rules and norms and expectations. That's true of anyone entering a graduate program, though — think professionals attending business school — and certainly isn't unique to veterans. They shouldn't listen too intently to Friedman's flattery!

On balance I think that such an influx will enormously enrich the field, bringing in a new generation of smart, energetic, pragmatic and experienced junior scholars. In political science, it has already begun to galvanize the study of insurgencies and civil wars (see: Small Wars Journal), but that should only be the start. War may have brought them into the field, but I suspect that many will range far more widely once given the chance to explore their intellectual horizons. I'm excited by the possibilities --- and hope that the academic disciplines, university departments, and professional associations are ready to encourage and to nurture their ambitions.

I'd be curious to hear what others have thought or experienced in this area. I'll update and link back to any quality responses I see out there!