Accessibility links
Movie Review - 'The Cove': A Stirring Crusade Against A Brutal Trade Louie Psihoyos' new film graphically — and movingly — documents the sale and slaughter of dolphins captured by Japanese fishermen. David Edelstein says the movie could be a game-changer for the industry. 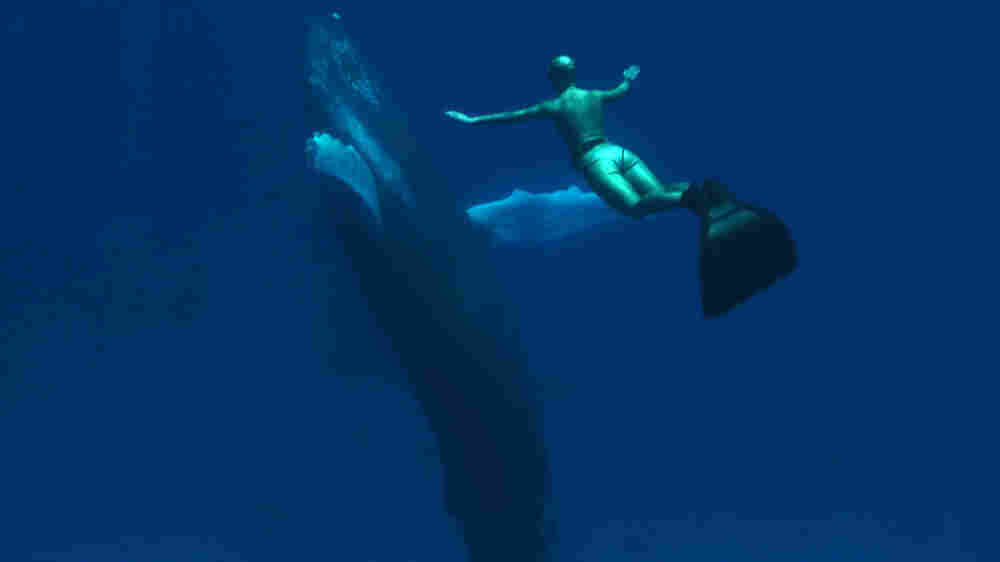 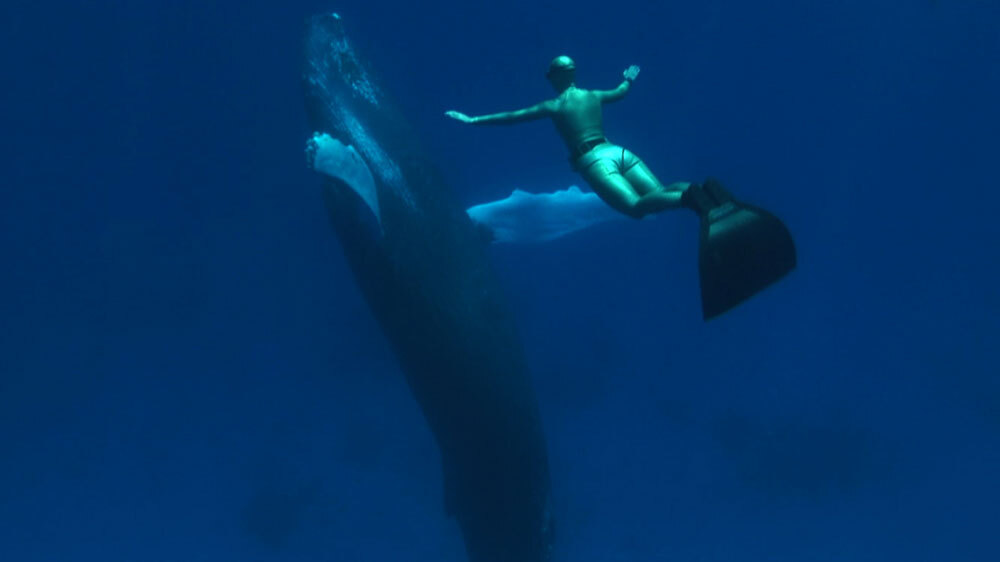 Diver Mandy-Rae Cruikshank is part of an Ocean's Eleven-style team assembled to gather evidence of dolphin abuse in Japan.

You measure an activist documentary in two ways: first, whether it evokes a world, whether it brings the issues to burning life instead of giving you just talking heads. Second is whether it whips you up to join the fight — or at least send a righteous e-mail. Director Louie Psihoyos' The Cove is gangbusters propaganda on both counts.

The setting, off Taiji on the rural coast of Japan, is near-mythic in its beauty and mystery, and the act under scrutiny has a mythic horror. The film's second half is built like a caper picture, a white-knuckle mission by a team of idealists — they attempt to outwit a pack of greedy and vaguely demonic killers with spies everywhere. Hollywood could hardly have contrived a more dynamic scenario.

The protagonist of The Cove is a man who has sinned in his own eyes and has spent much of his life trying to atone. He's Ric O'Barry — in the early 1960s, the world's most famous dolphin trainer. He captured the five dolphins that became TV's Flipper — that frisky, laughing, clapping, backward-dancing Rin Tin Tin of the Florida Keys.

O'Barry looks a lot like the late Richard Widmark, lean and haunted, and for years he has devoted his life to liberating dolphins. When he speaks about the impact of captivity on the mammals, he doesn't sound like a showboater, and what might seem like New Age-y talk about dolphin intelligence is pointed up with footage that left me haunted, too. That smile, says O'Barry, is nature's greatest deception. Dolphins smile even when they're crying on the inside.

It's a billion-dollar industry, capturing dolphins for seaquariums, and its center is Taiji. But it's the dolphins who don't look like Flipper and won't attract top dollar that suffer the far more gruesome fate.

The Japanese representative to the International Whaling Commission and sundry lackeys deny, deny, deny that any large-scale cruelty occurs — and minus pictures of actual butchery, who can prove them wrong? O'Barry and his allies need footage — what they call "a game-changer." So they set out to get some. 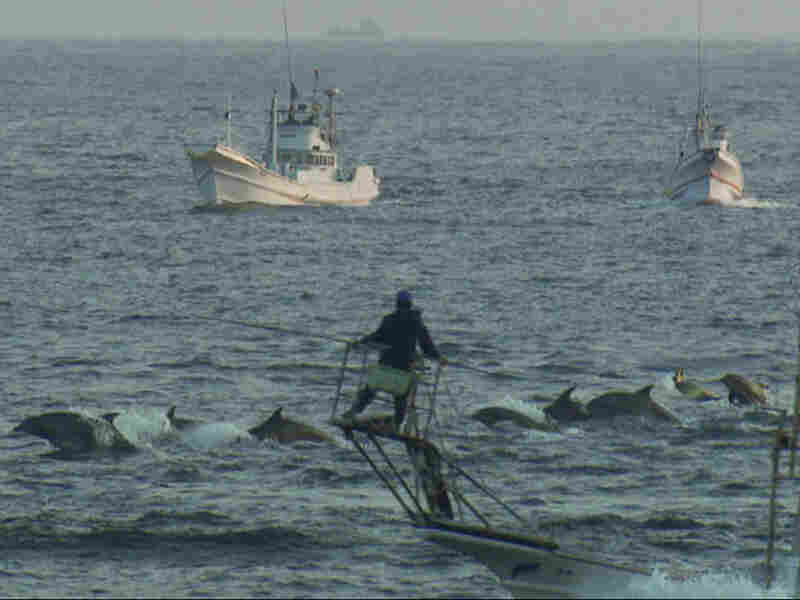 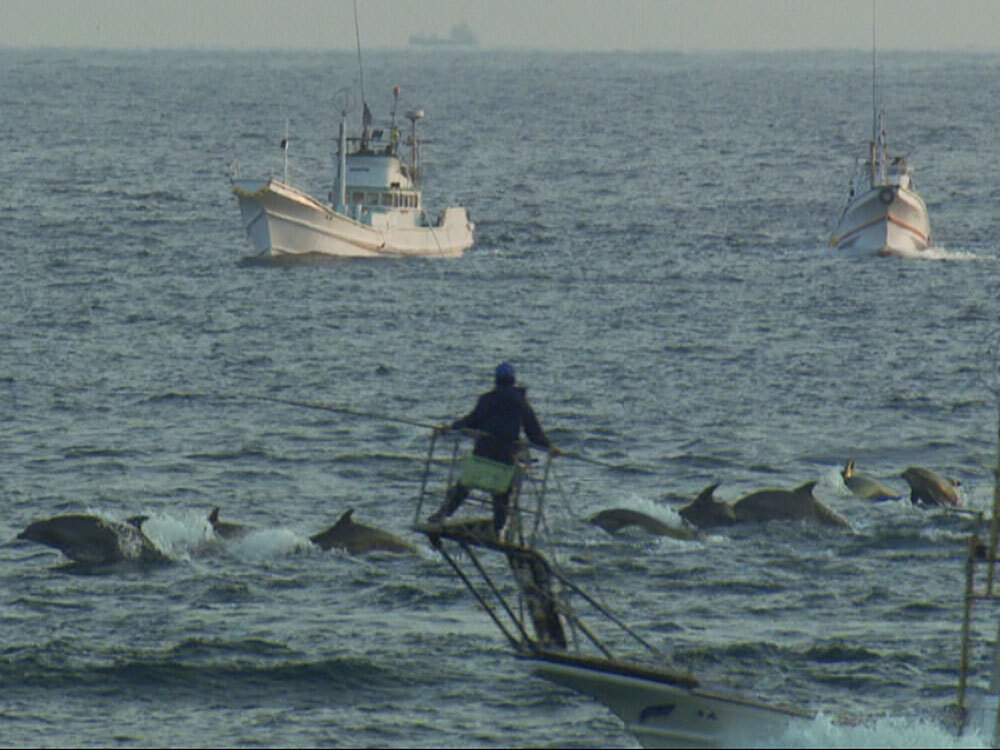 Japanese fishermen drive dolphins into the cove for capture or slaughter.

Diver Mandy-Rae Cruikshank models her underwater-breathing techniques — she'll plant the cameras. And she has a personal stake. Weeks before the mission, we see her watch a bleeding dolphin that somehow escaped the cove as it fights the tide and slowly expires in the waves; as she weeps, Taiji fishermen point at her and laugh.

The movie reminds us repeatedly that the vast majority of the Japanese public has no idea what's going on, but it does suggest the Japanese government bribes smaller nations to join it in the fight against whaling restrictions, as if it's the prerogative of a great empire. The killing, when finally seen, is indescribable, the water of the cove turning from bright blue to a deep, dark red. You're almost grateful, though — because the carnage itself is partially obscured.

The end of The Cove is as rousing as anything from Hollywood. Manipulative? Sure — but isn't that fitting? Profit has driven an entire village to massacre dolphins and keep its work hidden. Now comes the exciting documentary, likely to be a crossover international hit. You can't get away with killing Flipper: It's the bad guys, in the end, who are dead in the water.