Accessibility links
Obama Beer Summit Choices Make For A Happy Hour President Obama holds a sudsy summit tonight with Henry Louis Gates Jr. and the officer who arrested him. We asked The Beer Sommelier: What do their beer choices say? For one thing, they've picked brews designed to be downed pint after pint with mates. 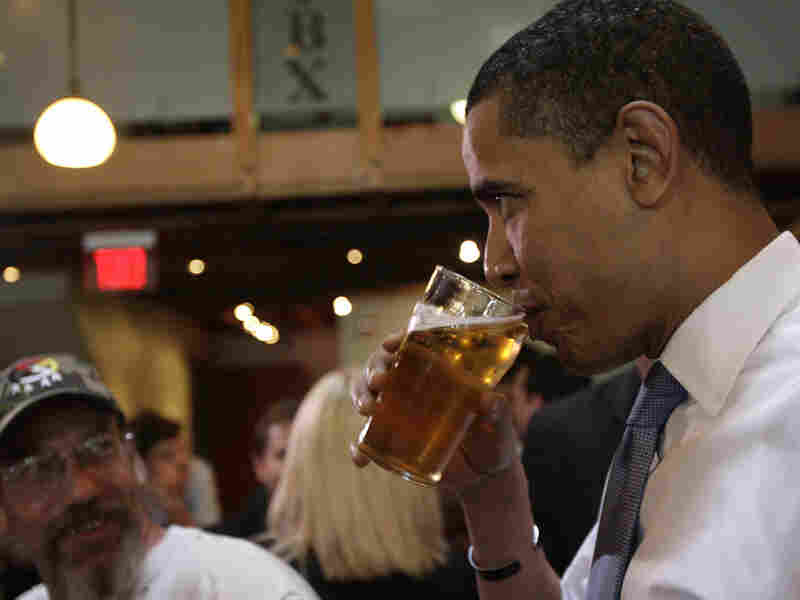 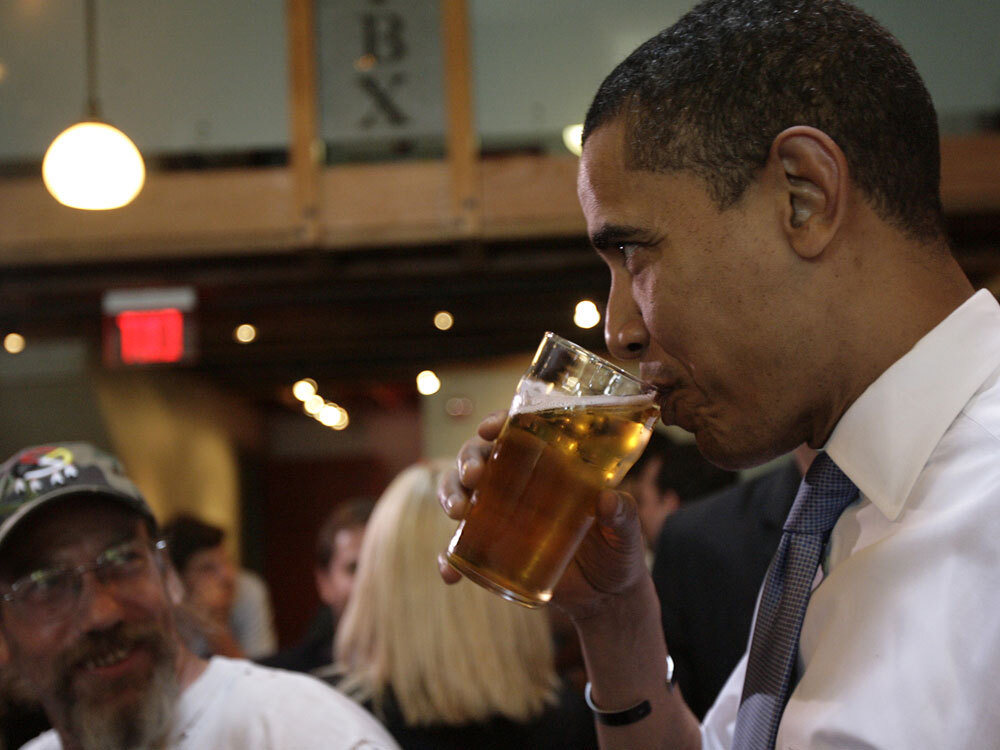 Then-presidential candidate Barack Obama is shown drinking a beer at a North Carolina bar in May 2008. His choice for Thursday night's beer summit at the White House: Bud Light.

The label on bottles of an amber ale produced by Utah's Moab Brewery reads: "You Can't Beat A Dead Horse." Oh, reeaaally?

Simpson, 42, who goes by the trademark "The Beer Sommelier," is a former journalist who, among other beer-biz-related pursuits, actually teaches "Beer Education" at Emory University.

We think we found the right guy for the job.

By choosing beer for the meeting instead of, say, a Washington state pinot noir or a summery gin and tonic, what was the president trying to telegraph?

I'd say he's attempting to cater his appearance to the everyday layperson throughout Middle America. Beer is one of the oldest alcoholic beverages in the world, and the oldest and most popular in the United States. Most of the rebel meetings of our Founding Fathers were based around a pub, or a big tub of beer, and many of them brewed beer on the side. Many of the world's most important — and maybe some of the worst — decisions were probably based around a glass of beer.

Can you tell us what the beer choices for the summit might tell us about the quaffers? (For Obama: Bud Light, owned by Belgian beverage giant InBev; for Gates, Red Stripe, Jamaica-brewed and owned by premium drink behemoth Diageo; and for Crowley, Blue Moon, owned by MillerCoors.)

They're all really session beers — a description that originates in Britain. They're the kind of beers drunk when a bunch of mates sit down and drink pint after pint after pint of light, refreshing beers. Session beers are meant to be drunk in quantity — they don't fill you up and can be drunk without too many deleterious effects. Maybe President Obama and Professor Gates want to project something that appeals to the masses, but the officer is probably drinking simply what he likes.

Bud Light is considered a "lawn mower" beer, perfect for after mowing the lawn or when you get home from work. It's one step up from a nice, tall glass of ice water and generally one of the lightest pale lagers made in the United States. Red Stripe is also a pale lager, but it's an official handmade product, with a little more flavor and flair. And Blue Moon is also mass-produced, but it's an ale. It's a more flavorful beverage, with some floral character and hints of coriander and orange peel. None of these are microbrews or craft beers, but the closest is Blue Moon, a tasty beer that's a macrobrewer's attempt to join the craft beer market.

Our "Political Junkie" blogger, Ken Rudin, wonders: If President John F. Kennedy and Soviet Premier Nikita Khrushchev had met over beers during their ill-fated 1961 Vienna Summit, the Berlin Wall might never have been built. Thoughts?

I think maybe Khrushchev would have been happy enough to shake hands and sing a song with the president. But I don't think it would have changed the outcome.

You have been careful not to criticize the choices of today's three summiteers, but you clearly prefer more complex brews. What are your favorites?

It remains to be seen whether the beer summit will improve race relations, but how about beer sales?

Any national exposure for beer is good — there is no such thing as bad publicity at this point in the game.