Accessibility links
Wilco: Back To The Beginning : World Cafe In this World Cafe appearance, the band discusses its new record, Wilco (The Album), while beloved singer-songwriter Feist joins in to discuss and perform "You and I," her duet with frontman Jeff Tweedy. 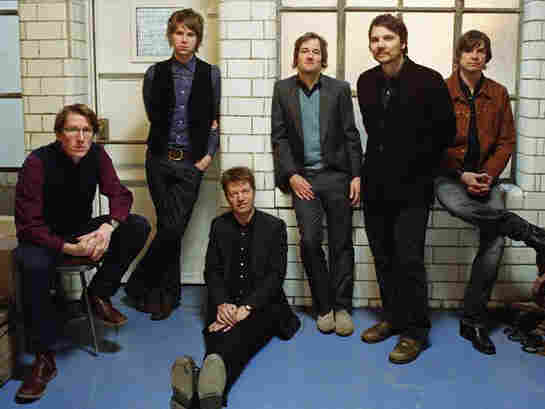 After the 1994 demise of Uncle Tupelo, the band's two leaders went their separate ways. Jay Farrar struck out on his own with Son Volt, while Jeff Tweedy took the rest of Uncle Tupelo with him to form Wilco. While the latter group's first album, 1995's A.M., remained firmly in the alt-rock vein of Uncle Tupelo, 1996's lush, sprawling double album Being There earned Wilco much-deserved critical praise and established Tweedy as a terrific pop songwriter.

Wilco's third album, Summerteeth, followed three years later; while it was enormously well-reviewed, mediocre sales sparked tension with the band's label that would culminate in Wilco moving to Nonesuch for the release of what many regard as its masterpiece: 2002's Yankee Hotel Foxtrot. The 2004 follow-up, A Ghost Is Born, won two Grammy Awards, while 2007's Sky Blue Sky found Wilco returning to its alt-country roots while altering its lineup. The new Wilco (The Album) follows a similar path, to even sharper effect.

In this World Cafe appearance, the band discusses the new record, while similarly beloved singer-songwriter Feist joins in to discuss and perform "You and I," her duet with Jeff Tweedy.