Accessibility links
New Wave Of Political Unrest, Violence Hits Iran Riot police clashed Thursday with demonstrators and mourners in Tehran commemorating those who have been killed since Iran's disputed presidential election in June. 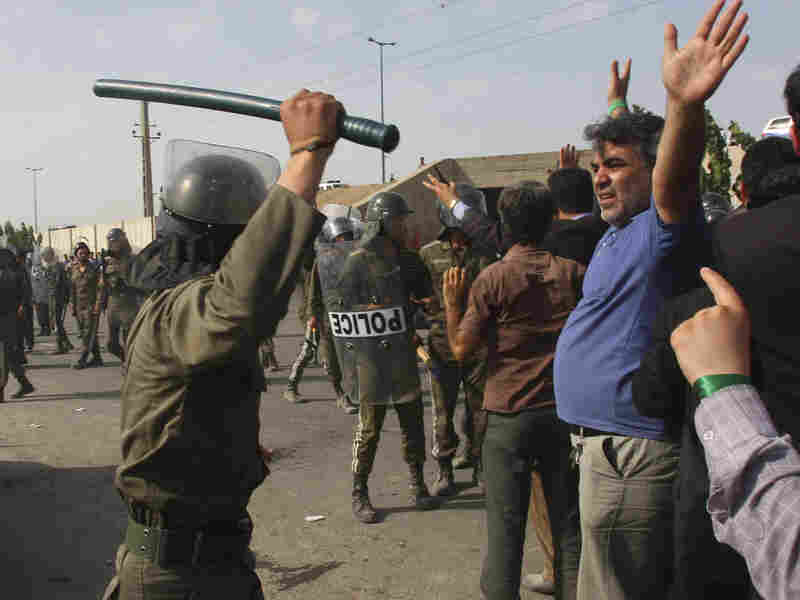 An Iranian anti-riot policeman raises his baton to disperse protesters at an opposition rally Thursday at the Behesht-e Zahra cemetery outside Tehran, Iran. The Iranian government has banned foreign media from covering some events in Iran; this image was taken by an individual not employed by The Associated Press and obtained by the AP outside Iran. AP hide caption 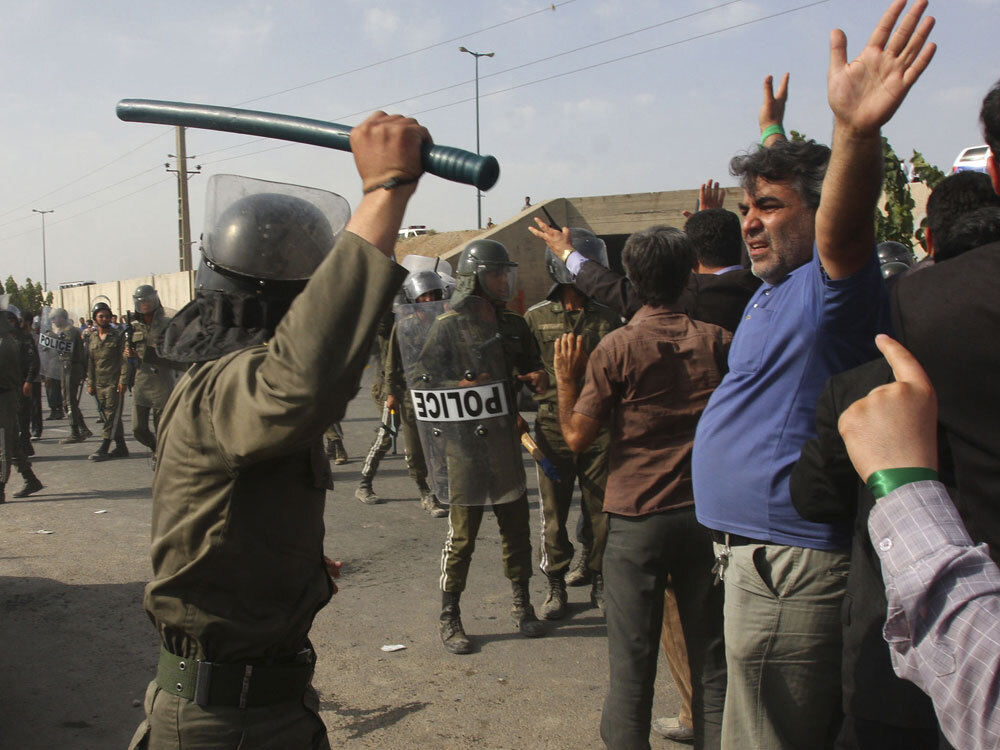 An Iranian anti-riot policeman raises his baton to disperse protesters at an opposition rally Thursday at the Behesht-e Zahra cemetery outside Tehran, Iran. The Iranian government has banned foreign media from covering some events in Iran; this image was taken by an individual not employed by The Associated Press and obtained by the AP outside Iran.

Riot police clashed Thursday with demonstrators and mourners commemorating those who have been killed since Iran's disputed presidential election in June.

Police used tear gas, attacked mourners with truncheons, and even smashed the windows of automobiles whose drivers were honking their horns in solidarity with the protests, according to witnesses and reports on state television.

The demonstrations in Iran show no signs of abating and come amid growing disarray within Iran's hard-line government.

A public conflict has broken out between President Mahmoud Ahmadinejad and Iran's Supreme Leader Ayatollah Ali Khamenei over Ahmadinejad's appointment to high office of a man hard-liners consider too soft on Israel.

That led to the resignations of two key figures in Ahmadinejad's government — the ministers of intelligence and culture. In turn, those resignations are threatening the stability of the government and brought a rebuke from a majority of members of parliament.

Muhammad Sahimi, who writes for a Web site called Tehran Bureau, says the government of Iran is now in deep crisis.

"The hard-liners, although they pretend that they have won the election fair and square, they know that at the minimum, even according to their own statistics of voting, a large fraction of the population does not believe in the legitimacy of the election," Sahimi says.

Next week, Ahmadinejad is to be inaugurated for his second four-year term as president. Opposition leader and former presidential candidate Mir Hossein Mousavi has called for protests throughout the week.

Witnesses say several thousand took part in demonstrations Thursday, chanting "down with the dictator" and other slogans challenging the legitimacy of Ahmadinejad's government.

The location of the clashes was highly symbolic — the grave where 27-year-old Neda Soltan is buried. Soltan was shot and killed at a demonstration in June; her death was captured on cell phone video and circulated around the world.

Mousavi tried to join the mourners, but police would not permit it. The opposition in Iran believes Mousavi was the real winner in the June 12 election.

Later, another crowd of mourners, also said to be in the thousands, assembled at a prayer ground in central Tehran. The police attacked there, as well.

A Mother Speaks Out

"She left the house mid-afternoon. I couldn't join her, but I said I would keep in touch with her. I managed to get through to her twice. I asked her, what's going on? She said the streets are full of people," she told the BBC Thursday.

After that, her mother could not reach her. In the evening, Hajar got a call from Neda's music teacher to come to the hospital.

"I went to the hospital. The music teacher, Mr. Panahi, his shirt was covered in blood. I said I want to know the truth. I knew something was wrong. They were not telling me the truth. They kept saying different things about where she had been shot. Fifteen or 20 minutes later, I learned that my daughter was dead," she said.

In addition to the government instability and continuing street clashes, most of the senior ayatollahs within the clerical establishment in Qom, Iran's center of Islamic learning, have now made their disapproval known — through their silence, says Farideh Farhi, an Iran specialist at the University of Hawaii.

"None of them [has] actually congratulated Mr. Ahmadinejad for his presidency, and they have remained quiet. Now, it is true that you have some clerics [who] are close to centers of power and are considered to be hard-liners that have supported Mr. Ahmadinejad and Mr. Khamenei's action. But the silence that you hear from Qom [is] very significant," Farhi says.

Evidence is also growing that more than 20 people — the official figure — were killed during clashes with police since the election, says Sahimi of Tehran Bureau. Some have been killed after they were detained in prison, he says.

It all adds up to growing instability in Iran, according to Farhi.

"There is no doubt that there is going to be more disagreements, more tensions. In effect, you can consider the situation in Iran as totally chaotic," she says.