Accessibility links
House OKs More Cash-For-Clunkers Funds The House voted Friday to rush $2 billion more dollars into the government's cash-for-clunkers program. It emerged Thursday that the $1 billion set aside to encourage purchases of fuel-efficient vehicles may be in danger of running out only days after the program began.

The House voted Friday to rush $2 billion more dollars into the government's cash-for-clunkers program. It emerged Thursday that the $1 billion set aside to encourage purchases of fuel-efficient vehicles may be in danger of running out only days after the program began.

From NPR News, this is ALL THINGS CONSIDERED. I'm Madeleine Brand.

And I'm Robert Siegel. First this hour, the rush to save the Cash-for-Clunkers program. That's the government initiative that offers rebates to people who trade in old cars for new more fuel-efficient ones. This small fraction of the huge stimulus package has proved wildly successful, so successful that it has run out of money that was supposed to last into November.

BRAND: In a moment, we'll ask how much the program has helped new car sales. First, as NPR's Adam Hochberg reports, today the House raced to pass legislation to keep the program afloat, at least for now.

ADAM HOCHBERG: Washington leaders spent the day scrambling to preserve a government stimulus program that appears to have been working too well. The billion dollars Congress originally put in the program was intended to last into the fall. But so many drivers have taken advantage of the rebate that funding is close to being depleted, after being in effect just five days. Today, President Obama expressed confidence the program will go on.

President BARACK OBAMA: We're now working with Congress on a bipartisan solution, to ensure that the program can continue for everyone out there who's still looking to make a trade. And I'm encouraged that Republicans and Democrats in the House are working to pass legislation today that would use some Recovery Act funding to keep this program going.

HOCHBERG: The legislation, which the House later approved easily, injects an additional $2 billion into the Clunker program. If the Senate passes the bill next week, consumers would continue to be eligible for rebates up to $4,500 if they buy new cars and trade in certain older ones. During today's House debate, California Republican John Campbell said the program has already led to the sale of about a quarter million vehicles.

Representative JOHN CAMPBELL (Republican, California): That is clearing inventories in car dealerships, which means car dealers will be ordering more cars. When they order more cars, plants will open up, they will be producing more cars. And people will go back to work. It is the one thing that we have done here in this Congress that is absolutely working. It is creating jobs and we want it to create more.

HOCHBERG: At Fred Anderson Toyota in Raleigh, North Carolina, sales manager Sammy Hatlee(ph) walked through the showroom this morning, pointing out customers who wanted to cash in.

HOCHBERG: So busy that Hatlee says his inventory is now at a five-year low and he's having trouble keeping Priuses, Corollas and other vehicles in stock. While Hatlee originally anticipated he might sell about 15 more cars because of the program, he says the actual number of clunker trade ins has been much higher.

Mr. HATLEE: We've been so busy, it's - you can't sit down and do the calculations, but I will say we've done over a 100 of them since the program started. And I would say probably 50 of those may not have bought a car, if the program hadn't have been here.

HOCHBERG: Among the customers hoping to take advantage of it today was retired cattle farmer, Cathy Bobbit(ph). She drove to the dealership in an old Ford Explorer and was listening to a sales pitch about a Toyota Corolla.

Unidentified Man: You know the Corolla does have a (unintelligible), right?

Ms. CATHY BOBBIT: Yeah. But it's - there's still something about the way, the shape of that…

HOCHBERG: Bobbit says the trade-in value for the Explorer is about $2,000, but the government rebate means she can get back more than double that, enough of an incentive that she and her husband decided to make a deal today.

Ms. BOBBIT: We had started kind of thinking about, it's about time for another vehicle and what do we want to do. So it, you know, this, kind of, was a little extra incentive to go ahead and do it.

HOCHBERG: At this dealership, sales people are continuing to offer Cash-for-Clunkers deals, even though the government funding may not be certain until the Senate acts. Sammy Hatlee, the sales manager, says the cars will be held for customers and they'll get their money back, if for some reason Washington fails to prolong the program. 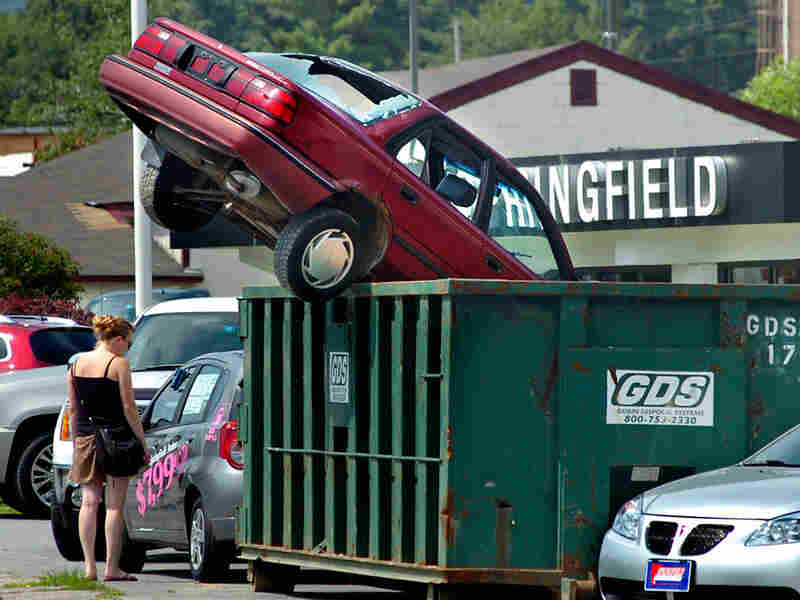 A woman shops for a car July 27 at Springfield Auto Mart in Springfield, Vt. Next to her is a car that was put in a dumpster as a promotion for the government cash-for-clunkers program. Vyto Starinskas/AP hide caption 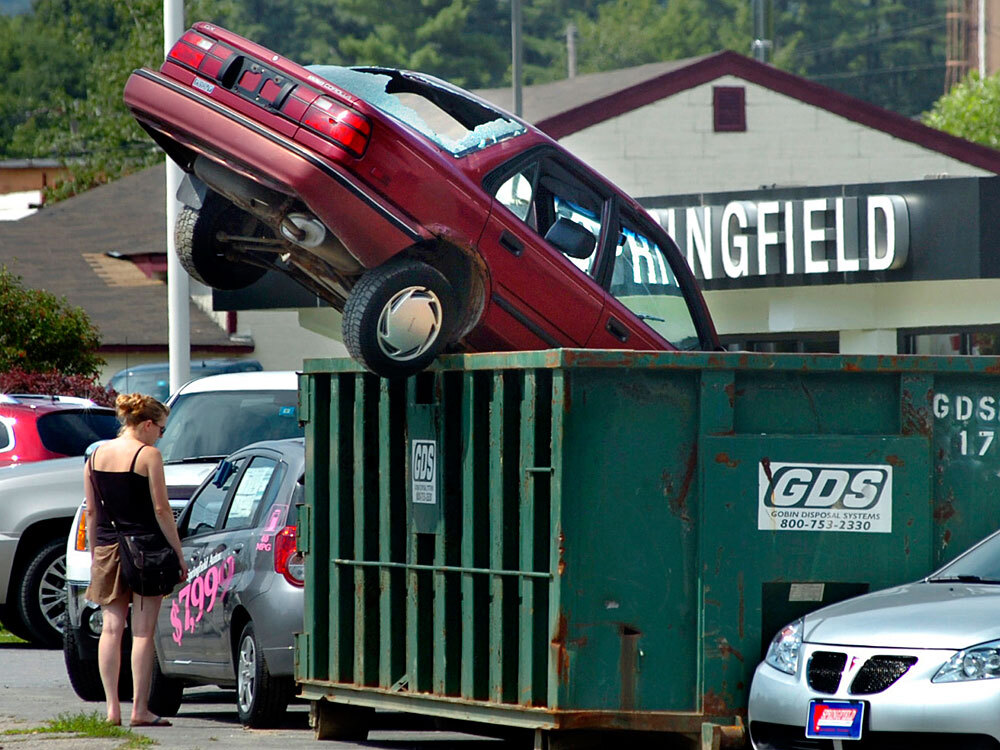 A woman shops for a car July 27 at Springfield Auto Mart in Springfield, Vt. Next to her is a car that was put in a dumpster as a promotion for the government cash-for-clunkers program.

With the government's "cash for clunkers" program overwhelmed by demand and out of money, the House passed legislation Friday pouring an addtional $2 billion into the program.

The bill was approved on a vote of 316-109. House members acted within hours of learning from Transportation Secretary Ray LaHood that the program was running out of money.

Rep. Sander Levin (D-MI) revealed a plan to add the money after he and other lawmakers were assured by LaHood that the program would continue at least through Friday while the Obama administration looked for more money.

Democrats in both the House and Senate were exploring the possibility of votes as early as Friday to replenish the funding.

Republicans argued that Democrats were trying to jam the legislation through. Some lawmakers also complained that many dealers were left to contend with a chaotic government-run program.

The Senate was not scheduled to vote on Friday but lawmakers hoped to win approval for additional funding next week.

At the White House, press secretary Robert Gibbs sought to assure consumers that the program is still running and will be alive "this weekend."

"If you were planning on going to buy a car this weekend, using this program, this program continues to run," Gibbs told reporters. He would not commit to any time frame beyond that.

But Gibbs said administration officials and bipartisan leaders of Congress were working Friday morning "to find and develop ways to continue to fund this program." Sen. Carl Levin (D-MI) said it wasn't clear when a Senate vote would be held.

"Cash for clunkers" offered the owners of old cars and trucks up to $4,500 if they traded in their old car for a new, more fuel-efficient one. The clunker had to get 18 miles per gallon or less. The program only started a week ago, but car dealers across the country saw an immediate rush.

"The atmosphere around the dealers just reminds me of, you know, 10 years ago, when people were just flocking in to buy cars especially in Silicon Valley," says David Horn, the general manager of Boardwalk Volkswagen in Redwood City, Calif.

However, Horn and many other dealers have put the program on hold after news that the program was out of money

According to Charles Cyrill of the National Automobile Dealers Association, many dealers are worried that they might not be able to get their reimbursements. They says there is a paperwork backlog in Washington. Still, they would like more money for the program, which has been a boon for car sales.

"The timing of the "cash for clunkers" program could not have happened at a better time," Cyrill says.