Accessibility links
Public Baffled By Health Care Arguments Lawmakers back home for the August recess will find voters left deeply confused about the health care overhaul still being hammered out in Congress. The delays in reaching an agreement — and big federal spending elsewhere — have fueled skepticism. 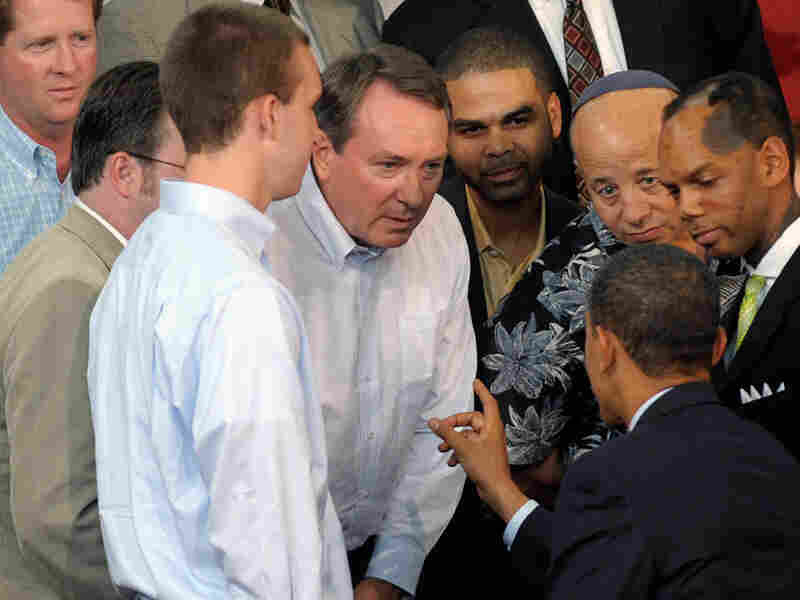 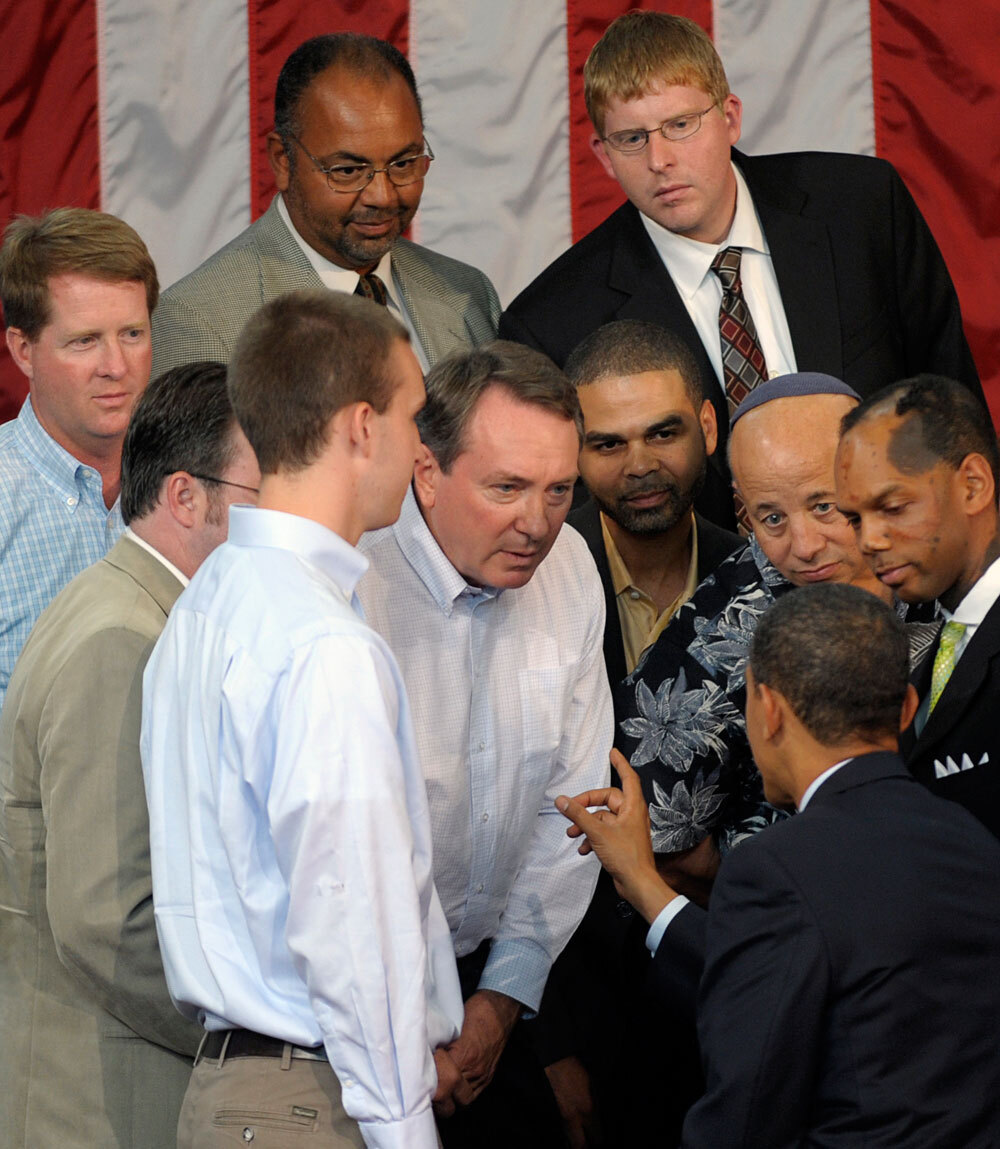 President Obama talks with a group of small-business owners following a town hall meeting on health care in Raleigh, N.C., on July 29.

As members of Congress head home for the summer recess, they will use the time to either sell to their constituents the national health care and insurance overhaul being fiercely debated in Washington, or deep-six it.

No matter which side of the issue members come down on, they will find that the people who put them in office remain deeply confused about what the still-being-written overhaul might bring.

And most Americans are equally suspicious of — and confused by — claims being made by both supporters and opponents of President Obama's most ambitious domestic initiative.

With Congress still struggling to fashion legislation and Obama letting the details take shape on Capitol Hill while he sells its broader parameters during appearances that include town hall meetings, most outside Washington have no idea what the overhaul will look like, what it will cost and how it could affect them personally, says Mark Blumenthal of Pollster.com.

The nation is close to evenly split in its assessment of President Obama's policies to date, the latest NPR poll found. Read more about the findings, including what voters had to say about plans to overhaul health care.

"Much of this story has been a big, inside-Washington debate about cost and bending the cost curve," he says. "It's a remote, technical discussion."

Polls show that the delays in reaching agreement on a bill — coupled with growing concern about the billions already spent on bailouts and the stimulus package — have spurred skepticism about whether Obama's biggest domestic initiative will help the country, and who it will benefit.

Iowa's senior Sen. Chuck Grassley, a Republican, has been one of a half-dozen Senate Finance Committee members who have been struggling to piece together a bipartisan bill.

But that proposal, senators have said, won't be ready until after the August recess. That means voters back home, desperate for concrete information about the overhaul, will have to wait longer for clarity.

And after the Senate leaves for recess this week, Grassley is guaranteed to face the same questions back in Iowa that Congress members will face across the country. That group includes Grassley's fellow Iowan Rep. Bruce Braley, who is part of a group of House Democrats fighting for a fix in disparities in how Medicare reimburses rural and urban health care providers.

"There is intellectual acceptance that health care is a problem and that it costs too much," says Graham Gillette, who runs his own public relations strategy company in Des Moines, Iowa. "But for most Americans, the confusing babble that's coming out of Washington sounds worse."

"And after the fear-mongering and mud-throwing of the last few weeks," he says, "that's not hard to understand."

There is intellectual acceptance that health care is a problem and that it costs too much. But for most Americans, the confusing babble that's coming out of Washington sounds worse.

In Iowa, a national labor union has aired television advertisements that targeted Grassley's support for a proposal that would tax health care benefits. The state's Democratic and Republican parties have stepped up their rhetoric in anticipation of the August recess. Volunteers who helped Obama win the Iowa caucuses last year are being recruited to make phone calls to remind supporters that a national health care overhaul was one of the reasons they voted for him.

The Need Is Clear

For the past decade, David Lind's company, based in Clive, Iowa, has conducted an annual survey assessing the state of health insurance in the Hawkeye State. It's meant for his clients in the employee benefits sector.

What his surveys have found, he says, reflect not only conditions in Iowa but around the country. The numbers are sobering.

"We have found in the past 10 years, health insurance premiums have basically doubled," he said. "That mimics what we've seen on a national basis."

Employers facing these dramatic increases in premiums have increasingly had to pass costs to their employees, Lind says, by increasing deductibles that employees pay and hiking co-pays for office visits and prescription drugs.

"Rather than drop health insurance, employers are reconfiguring plan design and ratcheting the [employees'] cost share upward," he said. "But employers are still taking the brunt of the increases in premiums."

Frog In A Pot

Des Moines-based pollster J. Ann Selzer likens the situation to the old frog-in-the-kettle analogy: "People are like frogs in a pot of warm water, with the temperature slowly rising," she says. "It feels warm now — but they don't realize how hot it's getting."

For many, she says, the status quo holds appeal — particularly in the face of heavy push-back from Republicans opposed to the tenets of Obama's overhaul goals.

Lind says his clients are particularly concerned about the status of a proposed public insurance plan that would compete with private insurers.

"There needs to be a meaningful discussion about what it means to actually have a public plan next to a private plan, so there isn't a hidden tax," he says.

"The dialogue seems to be more about politics than what's really happening," Lind says. "Let's get all the facts out there, have complete transparency of what it looks like, and then we can apply the facts to it."

When pollsters ask straight-up questions about whether people favor or oppose revamping health care, there is a little more opposition than support, Blumenthal says.

But when the surveyors ask more specific questions about what the plan might include, there is "remarkably consistent support in the 50-55 percent range," he said.

What hasn't been communicated well enough to the folks back home is what an overhaul could do — including guaranteeing that you won't lose your insurance if you change jobs, for example, or if you have a pre-existing medical condition, Blumenthal says.

"I don't get a sense that Americans have a very good idea of what the 'it' is," he says. "In the absence of a real strong case being made for this [what's happening] is that people are hearing and processing messages from the other side."

The Politics Of Confusion

People are confused, and there's the fear of the unknown, says Gillette, who volunteered for Obama in Iowa during his presidential run. And that uncertainly is compounded by the complexities involved in the administration's push for sweeping changes in one big overhaul bill.

"If Washington could have broken the problem into pieces — cost containment, for example, and insurance portability — they could have hammered out some agreements and given people some confidence that progress was being made," he said.

"The approach they took was almost all-or-nothing," he says. "That is confusing, and, to many, scary."

And that's what Grassley and his congressional colleagues will face in coming weeks: confusion, skepticism and the still-lingering question of what the overhaul will look like and what will it mean for households in Iowa and beyond.

"The play's not over yet," Blumenthal says. "But proponents will be in a much better position to sell it when they have something concrete."