Accessibility links
Inauguration Expected To Spark More Unrest In Iran Anti-government protests continue in Iran despite a harsh police crackdown in Tehran. The opposition movement has transformed from a campaign for a presidential candidate to a broader movement challenging the leaders and the foundation of the Islamic republic. 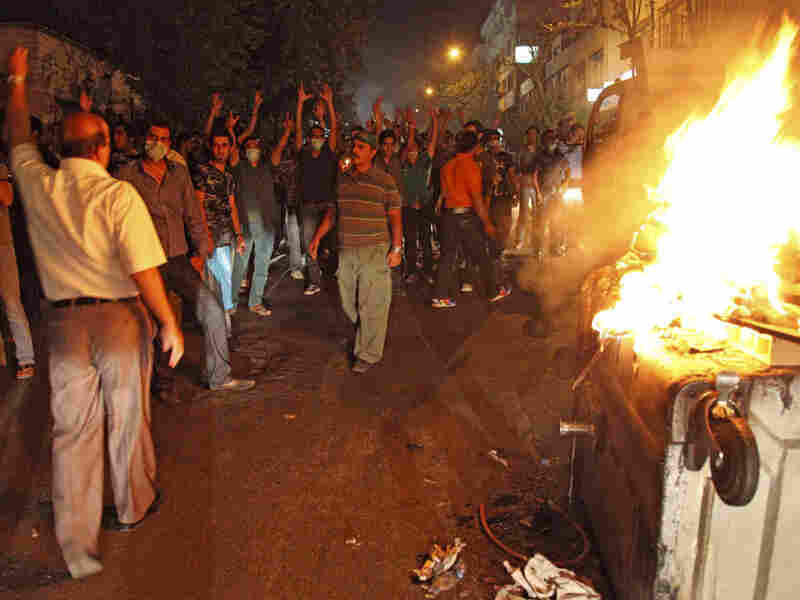 Anti-government protesters chant slogans as a public trash dumpster is set on fire during a protest in Tehran, Iran, July 30, 2009. The Iranian government has banned foreign media from covering some events in Iran; this image was taken by an individual not employed by The Associated Press and obtained by the AP outside Iran. AP hide caption 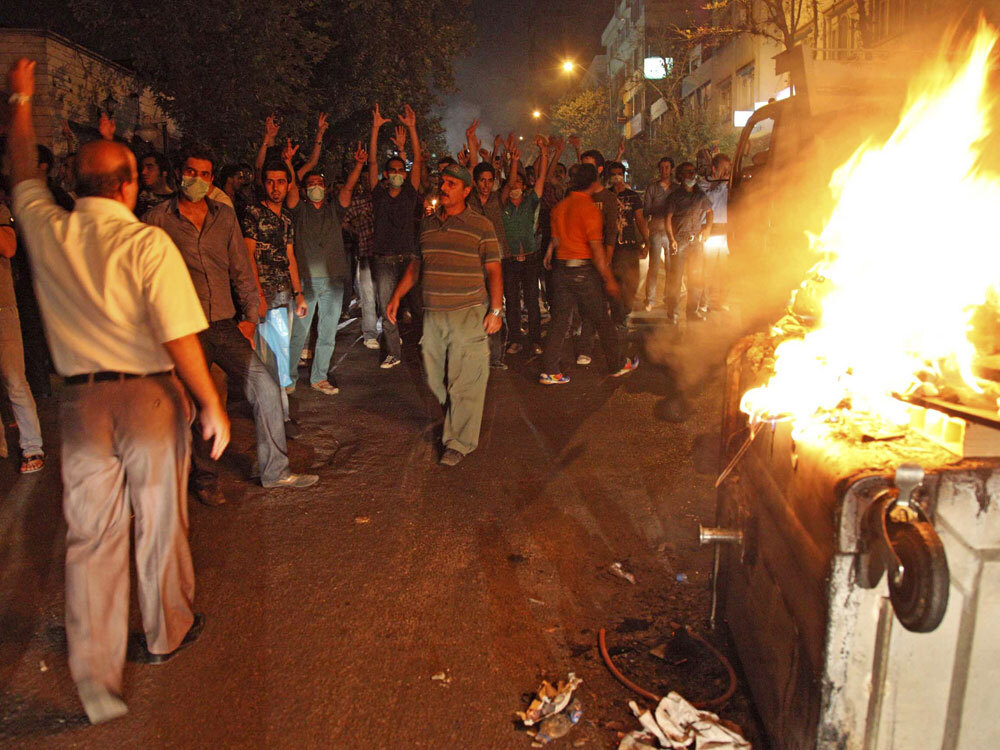 Anti-government protesters chant slogans as a public trash dumpster is set on fire during a protest in Tehran, Iran, July 30, 2009. The Iranian government has banned foreign media from covering some events in Iran; this image was taken by an individual not employed by The Associated Press and obtained by the AP outside Iran.

Despite the harsh police crackdown in Tehran, Iran's opposition movement continues to bring thousands of protesters into the streets to challenge the government.

Just last week, several thousand came out to commemorate those who have been killed since the protests erupted after Iran's disputed presidential election in June.

More protests are expected this week when Ahmadinejad is inaugurated on Wednesday.

In a matter of weeks, the opposition movement has transformed itself from a campaign for a presidential candidate to a broader movement challenging the leaders and the foundation of the Islamic republic.

Protest Has 'Life Of Its Own'

After a lull, the protest movement appears to be gaining strength again, says Hamid Dabashi, professor of Iranian studies at Columbia University.

"It is precisely because the ruling elite of the Islamic republic is conscious of the snowballing effect of these demonstrations that they are cracking down on them so severely and violently. And I'm absolutely convinced that it will continue. This is no longer just in reaction to the presidential election. This has assumed a life of its own," Dabashi says.

What the opposition movement wants is not entirely clear. The chant, "Down with the dictator," dominates the demonstrations. But there is a certain ambiguity to that, which seems to suit protesters of different political stripes.

The sentiment could be directed against Ahmadinejad, but also at Iran's supreme leader himself, Ayatollah Ali Khamenei, which would be a more profound challenge to the foundation of the Islamic republic, says Farideh Farhi, an Iranian specialist at the University of Hawaii.

It is also not clear who is leading the opposition movement, if anyone. Ostensibly, defeated presidential candidate Mir Houssein Mousavi is its leader, but his actions have been severely restricted. He rarely appears in public and is confined to posting his views on Web sites.

Some of Iran's prominent political figures, such as former President Ali Akbar Hashemi Rafsanjani and former President Mohammad Khatami, have attempted to set specific goals for the movement, but with little real impact, says Mehrzad Boroujerdi, a professor of Middle East studies at Syracuse University.

"Politicians of the ilk of Rafsanjani and Khatami are trying to see if there is any middle-of-the-road type of a solution, either by calling for a referendum or by asking for the release of political prisoners. I don't think that this is going to satisfy the citizenry any more, and it seems to me that that ship has already left the port," he says.

It has been a season of political surprises in Iran, beginning in May, just a few weeks before Iran's June 12 presidential election. Overnight it seemed, hundreds of thousands of people were turning out to support Mousavi, the reformist candidate. He chose green as the symbol of his campaign, and people all over Iran began wearing the color.

Violence Galvanizes Instead Of Deters

On June 13, officials announced that Ahmadinejad was re-elected president — by a seemingly improbable two-to-one margin, no less. And the green movement began its rapid transformation into an opposition, surprising everyone, Farhi says.

Despite the violence, thousands are still turning out to challenge the government. They don't number in the millions as they did back in June. But there are still many women, older people and some poorly dressed protesters to supplement the young men — largely from the educated middle class — who are taking the worst beatings.

The demands of the opposition remain vague, but that could change. Repression often breeds radicalization, which could lead to new surprises in the astounding political drama that still has Iran in its grip.