Accessibility links
Crackdown On Smuggled Guns Hindered By U.S. Laws Mexican President Felipe Calderon has asked the United States to do more to curb the flow of weapons smuggled into Mexico. But the U.S. has the most permissive gun laws in the developed world, making it difficult for federal agents to battle arms trafficking. 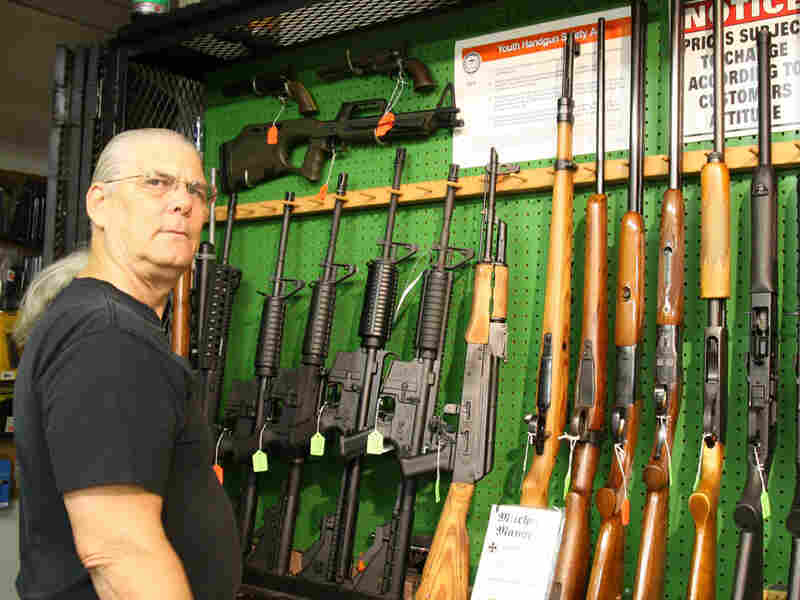 "We go through and check everything that's supposed to be done by the letter, and that's all we can do," says Chuck Fredien, a longtime gun dealer and gunsmith. "I don't have a crystal ball to look into and see if this guy's legitimate or not." Peter Breslow/NPR hide caption 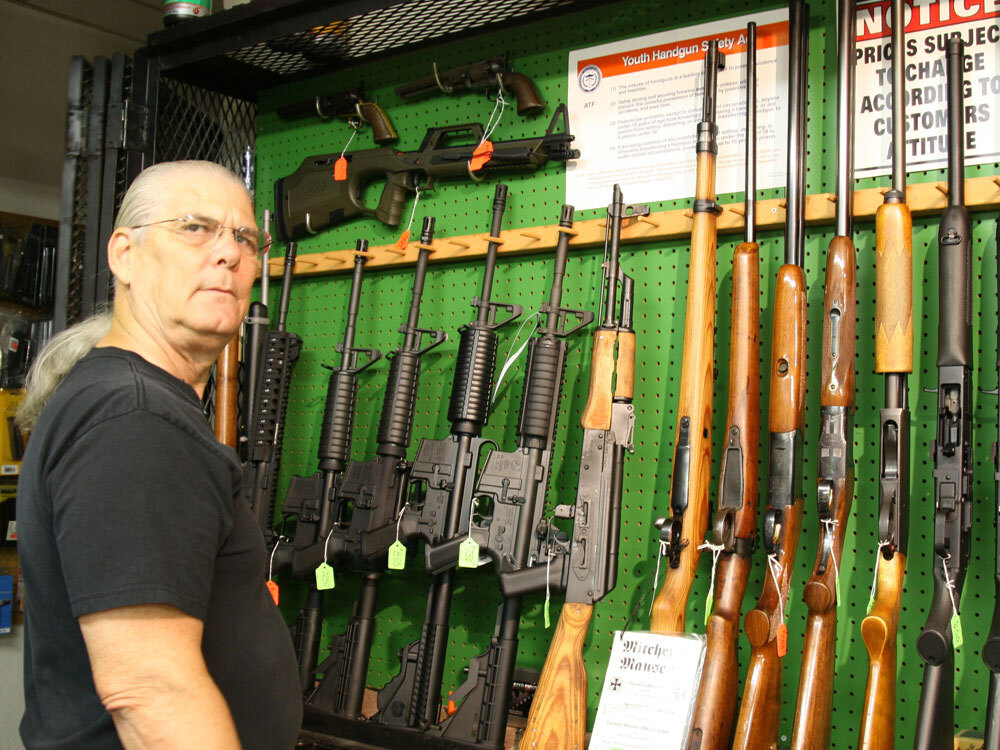 "We go through and check everything that's supposed to be done by the letter, and that's all we can do," says Chuck Fredien, a longtime gun dealer and gunsmith. "I don't have a crystal ball to look into and see if this guy's legitimate or not."

For years, Mexican drug traffickers have used gun stores and gun shows in the U.S. as their weapons supermarkets. The world's most murderous drug mafias operate on a border with a country that has the most permissive gun laws in the developed world.

Mexican President Felipe Calderon met with President Obama in April and asked the U.S. to do more to curb the flow of weapons smuggled into Mexico. The crackdown has begun, but it's hindered by the liberal U.S. gun laws.

None of these weapons has been traced yet. But a report released last month by the Government Accountability Office, based on traces done by the Bureau of Alcohol, Tobacco, Firearms and Explosives on crime guns recovered in Mexico in 2008, states that nearly 90 percent originated in the U.S. The report acknowledges the data are incomplete because Mexico doesn't submit all its confiscated weapons for electronic tracing.

The report's authors criticized U.S. federal law enforcement for the lack of a coherent campaign against weapons trafficking.

The ATF is trying to do something about that now. Officials have created "gun-runner" task forces in Houston and south Texas dedicated to firearms trafficking. And they are targeting what's known as "straw purchases" — when drug traffickers pay U.S. residents who don't have criminal records to buy the guns for them, then smuggle the weapons across the border to Mexico.

"We typically will see a straw purchaser go from gun shop to gun shop on the same day and be paid $50 a gun sometimes, buy 10 different guns, make $500 in one day," says Dewey Webb, the special agent in charge of the ATF field office in Houston.

Relaxed reporting requirements for arms purchases make it difficult for his agents. For instance, if you buy two handguns within five days, the dealer must report it to the ATF. But you can buy all the rifles you want, and the dealer doesn't have to report it.

Then there's ammunition. Ammo is not just untraceable, Webb says, it's virtually unregulated.

"You can go into any place that sells ammunition — be it a gun store, or, I mean, even some gas stations and bait shops sell ammunition — and you just buy as much as you want," Webb says.

In a 2006 case, two Mexican nationals walked into Kirkpatrick Guns and Ammo in Laredo, bought 12,570 rounds of assorted ammunition and got caught only when an off-duty ATF agent walked in and arrested them after he learned they were not U.S. citizens.

Gun Dealers: On The Defense

Gun dealers in the Rio Grande Valley of Texas are defensive about the idea that they're somehow contributing to the cartel war. Charles Fredien, a longtime gun dealer and gunsmith in Brownsville, says if he suspects a customer is buying a weapon for somebody else, he won't sell it to the person.

"We go through and check everything that's supposed to be done by the letter, and that's all we can do," Fredien says. "I don't have a crystal ball to look into and see if this guy's legitimate or not."

Second Amendment defenders like the National Rifle Association have seized on the ATF's incomplete Mexican tracing data and asserted that many illegal weapons seized in Mexico could be coming from the international arms market. Grenades and grenade launchers, for instance, are not sold by U.S. gun dealers, but they are available on the black market in Central America.

Ed Jones, a gunsmith in Fredien's store, says it seems the cartels have limitless resources.

"They have the money; they can buy weapons anywhere in the world," Jones says. "They don't have to buy them secondhand off the United States."

The ATF is using its additional agents in border states to investigate more gun trafficking cases and to make house calls on buyers of multiple weapons to see if they're legitimate.

But the problem, says Tom Diaz of the Violence Policy Center, a Washington gun control group, is that once the purchases are made, the horse is out of the barn.

"It's really asking a bit too much to ask ATF, through its resources, to stop a problem that really is a systemic problem springing from our wide-open civilian gun market," Diaz says.

Mexico has asked the U.S. not just to pursue gun traffickers on the border, but change the laws. But so far, the Obama administration has shown little interest in taking on the gun lobby.