Accessibility links
Exploring China's Unique Presence In Africa European journalists Serge Michel and Michel Beuret have chronicled China's push into Africa in the new book China Safari: On the Trail of Beijing's Expansion in Africa. Guy Raz talks with Serge Michel about why it's in China's interests to maintain a level of tension in Sudan.

European journalists Serge Michel and Michel Beuret have chronicled China's push into Africa in the new book China Safari: On the Trail of Beijing's Expansion in Africa. Guy Raz talks with Serge Michel about why it's in China's interests to maintain a level of tension in Sudan.

There's a scene in a book I picked up this week about Africa and China's investment boom there. A young man in Cameroon is standing on a road offering to fill potholes. He holds a sign that reads, stronger than Chinese. It's a little like saying better than German engineering here. And it sums up how many Africans feel about the Chinese according to the book "China Safari" by journalists Serge Michel and Michel Beuret.

Serge Michel explains what the Chinese are after in Africa.

Mr. SERGE MICHEL (Co-author, "Chinese Safari"): They need a lot of oil, a lot of timber, a lot of cover, a lot of things that Africa has to fuel their amazing roof. As they come late, you know, the best parts have already been taken by the Western companies in - starting in the '60s, '70s.

The Chinese pay their entry tickets by building them infrastructures. And that's actually very useful because previously, Western companies would pay in cash and this cash was dispersed and would file the pockets of the rulers and...

RAZ: It would essentially fill the pockets of corrupt rulers in Africa.

RAZ: Serge Michel, you have described as many as three quarters of a million Chinese now living on the African continent. Describe the process. I mean, a project comes up for bid. A Chinese company sort of arrives with heavy machinery, equipment and manpower, as well, their own labor?

Mr. MICHEL: Yes. Yes. They move their labor. For instance, in Algeria, the Chinese has win the tender(ph) for building the highway. It's a very large highway, a thousand kilometers long. They had the schedule to do it in 40 months because the Algerian president wanted the highway to be ready for the elections. The only way Chinese can meet the challenge was to move in about 12,000 workers with them.

Mr. MICHEL: Yeah. And these Chinese workers, they would live in Chinese barracks. They would eat Chinese food prepared by Chinese cooks. So they live very much among themselves and with very limited contact with local people.

RAZ: Can you describe for us the relationship between the Chinese corporations and local people? I mean, are they hiring local Africans in these various countries to do some of the labor?

Mr. MICHEL: In some places like Algerian Congo, they are obliged to for every Chinese they move in the country they have to hire two or three local workers. And they don't treat them very well. They don't go well together along because they have no common language. The Chinese who move in have never seen a black man before going to Africa and they have a lot of these cliches about African being lazy and not working properly. And in Africa, the people are not used to working shifts, like night shifts and day shifts, and Chinese find them very inefficient.

RAZ: So, I mean, what is the benefit for local economies if you have these Chinese companies coming in with Chinese laborers, importing Chinese food and goods to house and to feed and to cloth their own employees without employing local labor?

Mr. MICHEL: Yeah. The benefits is limited, if you want. But on the other hand, they leave behind us infrastructures that are badly needed. It really boils down to this, many Africans are fed up with the West preaching about democracy, good governance, human rights, but failing to make a difference. And the Chinese, they come with no ideology, they're not there to help, they just want to do business. And this is really appealing for Africans because if you come to make business, you are equal partners.

RAZ: But there are consequences, of course, for the world. China has a seat on the U.N. Security Council and that's been criticized for its inaction with respect to Darfur. There has been a lot of international pressure on the Chinese to use their influence with the Sudanese to get Khartoum to curb its abuses there. You say that it's not in China's interest for the Sudanese government to stop the abuses in Darfur.

Mr. MICHEL: Yeah. On one side, China's government doesn't want Darfur to be such a bloody example after a corporation in Africa. But on the other hand, Sudan was a great opportunity for China for the reason of embargo and the sanctions that, you know, nations and the Western nations have imposed on this - on Sudan. And Sudan is the only place where China is completely alone and free to do what it wants. So it has interest in keeping a certain attention in the country so that it keeps the Western companies out of the place.

Mr. MICHEL: Well, a lot of coverage that we've been reading before writing the book was treating this arrival of China in Africa as a new yellow peril or as a new threat for a continent that didn't need more suffering. But overall, Africa needs development and infrastructures. And if China can provide it, great.

RAZ: Serge Michel's book, "China Safari: On the Trail of Beijing's Expansion in Africa" is out now in English. His co-author is Michel Beuret.

Serge Michel, thanks so much. 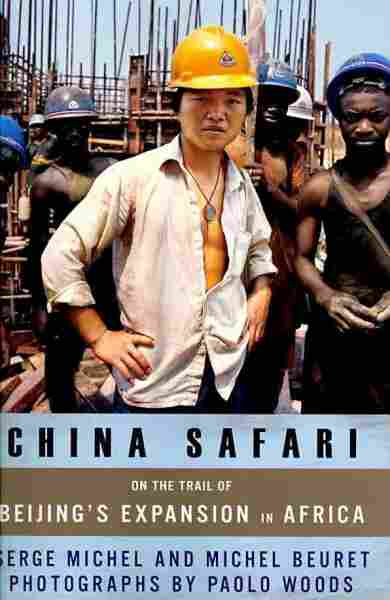 On the Trail of Beijing's Expansion in Africa