Accessibility links
For Authors, Ghostwriting Offers Solvency, Stability Authors struggling to hit it big on the publishing scene find that writing other people's books can open the door to financial freedom. 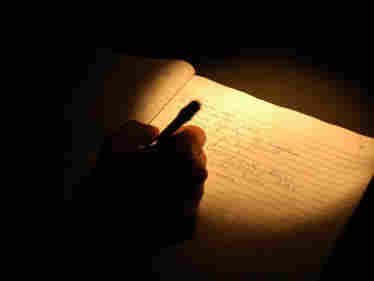 Ghostwriters face a trade-off: stable writing work in exchange for credit on the cover and book royalties. iStockphoto.com hide caption

When Grant Blackwood got out of the Navy in 1987, he decided he wanted to write thrillers. He knew it might be awhile before he could support himself by writing, but in the meantime he was willing to do whatever it took — including chopping wood and driving a limousine — to make his dream come true.

Twelve years later, Blackwood had his first novel published and figured he was home free. But he quickly learned that becoming a successful novelist is like a series of graduations with no guarantee of what happens afterward.

That bigger wall is getting your book sold — and then selling the next one. Jenny Siler, who also writes thrillers, got her career off to a great start when her first novel brought in a $150,000 advance.

"That enabled me to start writing professionally and support myself through my writing," says Siler. "[But] as time went on, my books became more literary and my advances became smaller."

Siler's most recent advance was $20,000, and though her husband also brings in money and they live modestly, that still isn't enough to support her, since it takes her between 12 and 18 months to write a book.

So both Siler and Blackwood have chosen to supplement their incomes by turning to ghostwriting.

For Blackwood, the decision came when the sales of his novels started dwindling. After his publisher turned down his fourth novel, Blackwood's editor promised he'd help him find work.

"It wasn't more than six months later when he called, and he said, 'I have this book. It's perfect for you. It's right up your alley, and we want to pay you for it,' " Blackwood says.

The way I look at these ghostwriting and co-writing projects is that the more financial freedom that I have to take some time with my own projects, the better off I'll be as a writer and an artist.

Blackwood now writes for popular thriller franchises he can't name. "They give me the characters and the world they live and work in, and I do the rest", he says.

Blackwood has ghostwritten five books, and as much as he likes being paid to write, he admits there are some drawbacks to being a ghostwriter:

"You don't get credit on the cover. You don't get royalties," he says. "It's kind of a contract deal. You write it, you give it to them, and your attachment from there financially ends. And you are not your sole master."

Siler, meanwhile, is working on her first ghostwriting assignment. She got into it after she co-authored a book with art thief Myles Connor. The two worked well together, and Siler got credit for her work. She didn't expect to do that kind of work again, but then she was offered an interesting and lucrative ghostwriting project she felt she couldn't turn down.

Although Siler's own books are fiction, both these projects are nonfiction. And because she is writing about someone's else's life, Siler feels she has to put aside her own way of doing things.

"I really feel like it's important to honor that person's story," she says. "I mean, I'm there to question the facts and to make sure that everything is factual. But I'm not there to comment. I'm there to portray them as they want to be portrayed."

For now, Siler has put her own writing aside, but she plans to get back to it once the new book is done. She figures she is buying herself some time in the future.

"The way I look at these ghostwriting and co-writing projects is that the more financial freedom that I have to take some time with my own projects, the better off I'll be as a writer and an artist," she says.

Blackwood isn't working on his own writing, either. Instead, he has a new book coming out this September, a Clive Cussler novel called Spartan Gold, which he's getting a co-writing credit for.

Blackwood finds ghostwriting satisfying, but he knows a lot of writers wouldn't.

"You do have to sacrifice complete control. You do have to be willing to answer to different masters who are sometimes giving you contradictory input. And you have to find that middle ground, and you have to do it in a diplomatic way. And that can be tough for someone who lives their life in a creative way," he says.

Still, both Blackwood and Siler say ghostwriting may not be perfect, but getting paid to write is a pretty good life.