Accessibility links
Democrats Attack Health Insurance Industry In search of a new edge to their health care efforts, President Obama and House Speaker Nancy Pelosi have turned their guns on the insurance industry. They're counting on Americans' distrust of insurance companies to shore up wavering support for the President's health care agenda. The insurance industry says its impressive profits do not mean it is adding substantially to the cost of health care.

In search of a new edge to their health care efforts, President Obama and House Speaker Nancy Pelosi have turned their guns on the insurance industry. They're counting on Americans' distrust of insurance companies to shore up wavering support for the President's health care agenda. The insurance industry says its impressive profits do not mean it is adding substantially to the cost of health care.

This is the month when President Obama and his allies will face sharp criticism over a health care overhaul. Thats because lawmakers are going back to their home districts and opponents are ready for them. It is also a month when the presidents critics will feel some of the heat. Consider this ad from a left-leaning group called Americans United for Change.

Unidentified Woman #2: Because they like things the way they are now.

INSKEEP: The commercial echoes a new line of attack by the White House and congressional Democrats. Theyre counting on Americans distrust of insurance companies to shore up support for the presidents health care agenda.

SCOTT HORSLEY: President Obama complained to Time Magazine recently that the press has gotten bored with the complicated details of the health care debate and reduced the story to a conventional battle between government-run health care and the free market. Thats not at all what the real debate is about, the president said. But apparently concerned hes losing the argument, Mr. Obama is trying to substitute his own conventional narrative. In this one, the insurance industry is cast as the villain.

President BARACK OBAMA: The truth is we have a system today that works well for the insurance industry. But it doesn't always work well for you. So

HORSLEY: Many talking points came during a week when several polls showed declining support for Mr. Obamas health care efforts. Presidential scholar Stephen Hess of the Brookings Institution suspects the president and his top lieutenants had done their homework.

HORSLEY: In his Time Magazine interview, Mr. Obama admitted when it comes to health care, he does study the polls. And that makes insurance companies a convenient, if not all together appropriate foil.

Ms. KAREN IGNAGNI (President, America's Health Insurance Plans): I think the inconvenient fact is that were for reform, so the rhetoric and the reality dont match.

HORSLEY: Karen Ignagni heads an industry trade group called America's Health Insurance Plans. She says the White House is treating health insurers as if these were 1993, when they fought tooth and nail against health care overhaul. This time around, she notes, the industrys been at the bargaining table and has already agreed to many of the protections the president is talking about.

HORSLEY: After all, the proposed requirement that virtually every American get health insurance could mean millions of new customers for the industry. What insurance companies dont like, though, is the idea of a public insurance option. And that has put the industry at odds with both the White House and House Speaker Nancy Pelosi.

Representative NANCY PELOSI (Democrat, California; Speaker of the House): Insurance companies are out there in full force, carpet bombing, shock and awe against a public option.

HORSLEY: Pelosi said a memo to House Democrats last week urging them to stick to a simple storyline during their August recess: Hold the insurance companies accountable. That message is in sink with the White House, Pelosi wrote, and helps to counter the Republican argument that Democrats want a government takeover of health care. Brookings scholar Hess thinks its unfortunate that the Democrats of chosen to demonize insurance companies, but he acknowledges the tactic may pay off.

Mr. HESS: I dont like them doing it this much. Its certainly lowers the caliber and quality of debate. But on the other hand, this isnt and Oxford debate.

HORSLEY: And its easier to attack insurance companies in a soundbite or a 30-second TV commercial than to really explain just how the government hopes to get control of runaway health care costs.

As the health care overhaul battle moves out of Washington and onto the airways and main streets during the August recess, America's Health Insurance Plans (AHIP), the trade association for the nation's health insurers, is fighting a familiar battle. 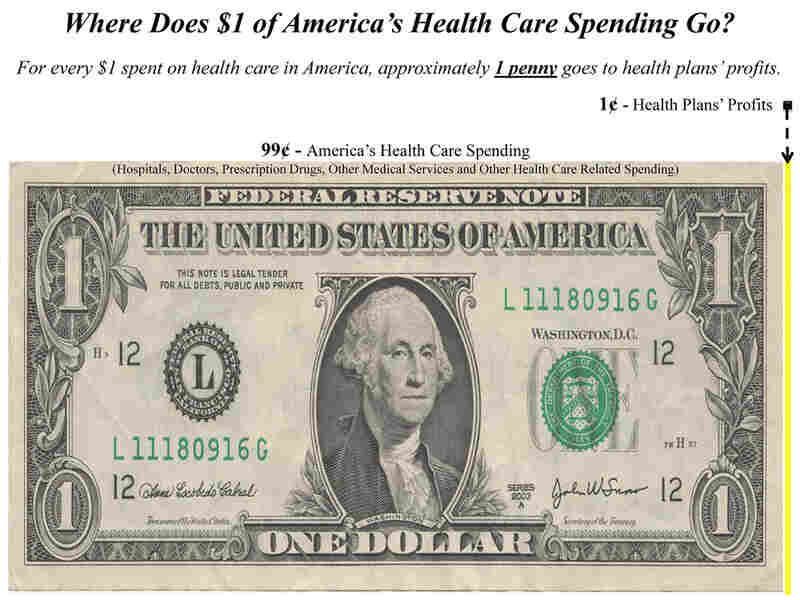 This illustration from America's Health Insurance Plans' blog is meant to show that 1 cent of every dollar spent on health care goes to health plans' profits. The McKinsey Global Institute calculated health plans' after-tax profits to be $21 billion in 2006, while national health spending for that year was $2.112 trillion. America's Health Insurance Plans/McKinsey Global Institute hide caption 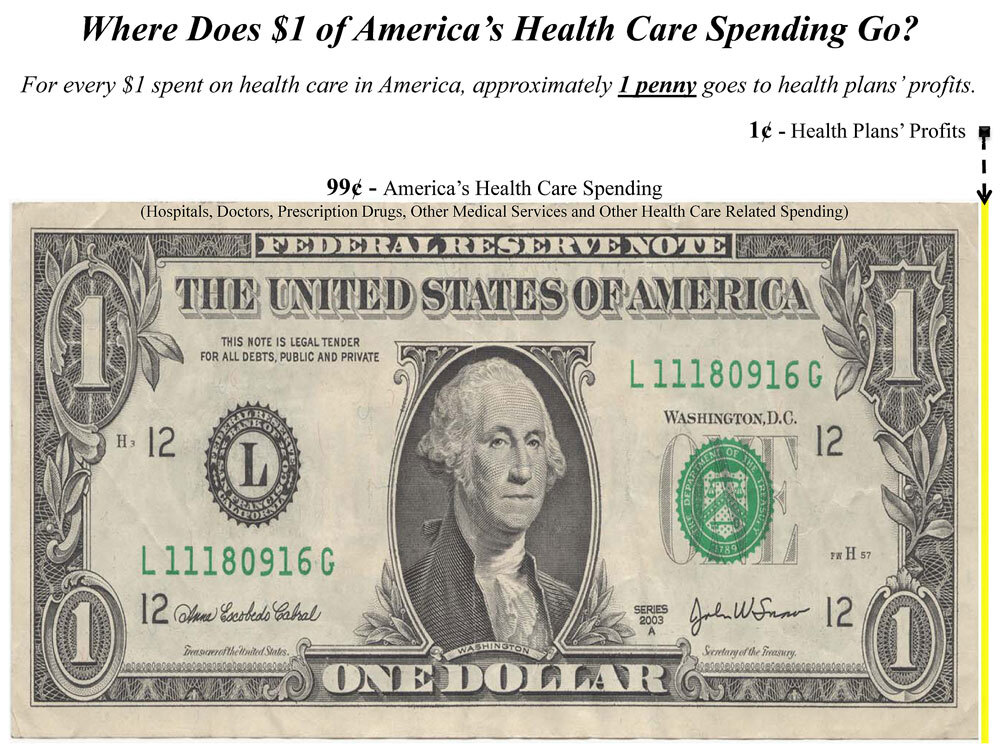 This illustration from America's Health Insurance Plans' blog is meant to show that 1 cent of every dollar spent on health care goes to health plans' profits. The McKinsey Global Institute calculated health plans' after-tax profits to be $21 billion in 2006, while national health spending for that year was $2.112 trillion.

It is fighting the perception that health insurance companies focus more on their shareholders' bottom lines than the interest of their patients.

To negate this notion, AHIP features a dollar bill with one tiny slice out of it (shown below) on their Web site, illustrating that their members only make 1 cent of every dollar spent on health care.

That may be the case, says Princeton economist Uwe Reinhardt, but "whether it's fair or not depends on what it is you want to describe," he says.

"All that statement says is, if you eliminated all our [insurance company] profits, national health spending in America would be 1 percent lower. It has meaning only in that context," Reinhardt says.

Insurers are measuring their profits against total health care spending. That's all the money you and I and employers and insurers and the government spend for doctors' visits, hospitalizations, drugs and other things.

But many economists calculate insurance company profits differently. Just like for any other business, they look at what the companies take in — in this case in premiums — versus what they pay out directly, as in claims.

For the 10 biggest insurers in the year 2006 (the year the insurers used for the 1 cent out of every dollar depiction above), profits were anywhere from 2 to 10 percent, or two to 10 pennies on the dollar. That's two to 10 times as much as what the insurance industry group suggests in its illustrations.

Robert Zirkelbach, a spokesperson for the insurers, defends the depiction.

"Health plans are providing value-added services to people across the country, and the vast majority of people are expressing very high satisfaction with their health care coverage," he says.

And, Zirkelbach adds, health plan profits are in line or even lower than other health care industries. But that may not be enough to give them cover as the Obama administration searches for places to cut the nation's health care bill.