Accessibility links
High-And-Mighty ESPN Should Take It Down A Notch ESPN has multiple channels, a magazine, a radio network and some unbecoming habits — like subtly claiming it alone uncovers all the news in sports. Commentator Frank Deford says the network would benefit from a bit more humility. 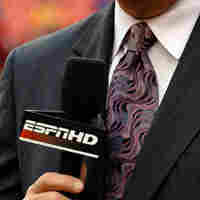 ESPN has multiple channels, a magazine and a radio network, and is starting local Web sites in many cities. Al Messerschmidt/Getty Images hide caption

Imagine if Vogue magazine was not only the country's single dominant fashion medium, but also produced most major runway shows. Imagine if The Wall Street Journal was not just the nation's only powerful business outlet, but it also owned the rights to the listings on the New York Stock Exchange.

Well, essentially, so it is with ESPN and sports. ESPN rules the land, the seas and the firmament of sport, and ESPN sees that it is good. ESPN has multiple channels, a magazine, a radio network, and now it's starting local Web sites in many cities to compete on that level.

What it covers is so often what it owns the rights to — in almost every major sport. To be sure, other networks share some rights to the various leagues, but only ESPN is a critical mass. ESPN can make you.

For example, it signed a 15-year contract with the Southeastern Conference for more than $2 billion, thereby sending every other conference into a panic mode, fearful that ESPN will make the SEC pre-eminent — America's conference. It can do that. In no other significant part of American culture does one media entity enjoy such domination.

The one major prize that has eluded ESPN is the Olympics, but NBC only owns rights through 2012, and as sure as Zeus made little gold medals, ESPN will make a huge run at that, too.

Now, I must pause here for a disclaimer: I have taken paychecks from ESPN and enjoyed working there. I have many friends at ESPN whose talent I much admire. I don't come to criticize so much as to just nestle up to the elephant in the room and ask, perhaps, that it act with a wee bit more humility and a lot less self-promotion.

For instance, the network has a very unbecoming habit of subtly claiming it alone uncovers all the news. Typically, a valid report will come out, but hours later, ESPN will declare that it has "confirmed" such-and-such. That's kind of tacky stuff. Exclusive: ESPN hereby confirms that it is Wednesday.

A couple of weeks ago, ESPN initially refused to report the news that was everywhere else headlined — that Pittsburgh's Super Bowl quarterback Ben Roethlisberger had been accused of sexual assault. The network's excuses were too noble by half, because there's a double standard, and ESPN is known to cozy up to the very superstars it purports to cover.

Just suppose that CNN regularly had cutesy commercials for CNN starring Nancy Pelosi, John McCain and Rahm Emanuel. Well, that's the equivalent of what ESPN regularly does with top sports personalities. The practice is, simply, a journalistic disgrace, and, because ESPN is so powerful, it diminishes the integrity of all sports journalism.

ESPN does so much quality work, but at a certain point, in whatever field, if you become omnipotent, and if you are secure, you stop being a conceited smarty-pants and start exhibiting a measure of grace.