Accessibility links
A Free Musical Haven For Inner-City Talents A recession is no time to launch a new summer music camp. John Littlejohn, a classically trained musician in his early 30s, jumped through many hoops to make his summer camp a reality. Dubbed Thrive City String Academy, the camp took place on the campus of Towson University in Maryland, and the campers were all handpicked by public-school music teachers.

A recession is no time to launch a new summer music camp, especially one that would be free to inner-city kids. The sheer audacity of it is impressive. But John Littlejohn, a classically trained musician in his early 30s, is a pretty impressive guy. He jumped through many hoops to make his summer camp a reality. Funding, he says, represented the steepest challenge. 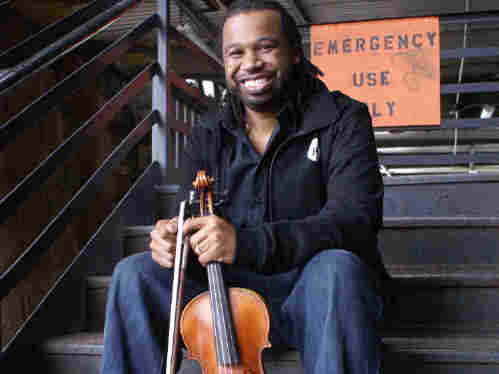 "Ugh. That's been the one," Littlejohn says, adding that people were constantly giving him reasons he couldn't do it. "Mostly, 'You're a new program in a recession. Arts organizations are already in trouble.' And it was discouraging, definitely. But I didn't hear the one reason why we shouldn't have this camp, which is that the kids don't need it. They need it. And for them, life has always been a recession."

John Littlejohn — that is his real name — says he didn't raise as much money as he would have liked to launch his camp, dubbed Thrive City String Academy. So he shortened it and invited fewer kids.

Thrive City took place on the campus of Towson University in Maryland. The school charged a reduced rate for the dorm rooms where the kids slept, meals in the cafeteria and classroom space for lessons. The campers were all handpicked by public-school music teachers. Littlejohn says he sought out kids who had a strong interest in music but didn't have money for lessons.

"This is a kid who is in a class of 30 violinists," Littlejohn says, "who loves music and is in the back, lost in the shuffle. And this kid just needs to be pulled out and given some private attention, because they love it and they just can't get the attention they need."

One of those kids is 10-year-old Shawntraze Dorsey. He's gone to other overnight camps with his church. But he was eager to point out that Thrive City is the first one he's attended that has an all-you-can-eat buffet in the cafeteria, and that he's learning new ways to play the violin. He says he's particularly fond of tremolo.

"It's when you shake [your bow]," he says. "You just go like one inch up and down on the strings. It makes a squeaky noise."

Dorsey and the other campers also learned to play an arrangement of Michael Jackson's "Billie Jean."

Rising To The Orchestra

Littlejohn has been teaching for about 10 years. He grew up in Michigan, raised mostly by his mom. In the '80s, she was laid off from her job as a secretary for GM, so they moved from a middle-class neighborhood to a poor one. By the time Littlejohn was in sixth grade, things had gotten better and they'd moved back to a middle-class neighborhood. But he says it was still an adjustment.

He felt different in other ways, too.

Kind of ghetto. Playing violin. In the school orchestra.

"So they always knew me as that kid struggling in the back," Littlejohn says. "But quietly, I'm creeping up the section and they're like, 'Wait, this kid is passing me. What happened?' "

Littlejohn gives full credit to the teachers who offered to help him along the way — first in high school, then at the University of Michigan, and finally at the Peabody Conservatory.

He became close friends with fellow Peabody students Alex and Anthony Cheung. The three of them formed the string trio Infinitus, and education remains a big part of what they do. At their concerts, they play classical, hip-hop, Latin, jazz and their own original compositions.

Littlejohn recruited the Cheungs and other musician friends to be counselors at Thrive City String Academy. He says one of the best moments at the camp came at the end of a very long day.

"The kids were exhausted," he says. "They had played all day. Most of them had never played this long in their entire lives. We have free time before lights out at 10 o'clock. From 9 to 10 p.m., they can just hang out in the hall. I expected them to just run around and play. They started pulling out their instruments and started playing. I almost cried. The whole faculty was flabbergasted. They just wanted a place to play music. They're just so happy to be playing. I turned to the faculty and said, 'We got the right kids. These are the kids we were looking for.' "

Littlejohn has already started fundraising for next summer. And, he says, it's not much easier.