Accessibility links
Threats Cloud Afghan Women's Political Ambitions Later this month, a record number of women will be on the ballot in Afghanistan's elections — a major change in a country where women weren't allowed to attend school eight years ago. But many female candidates and voters are facing oppression, threats of violence and fraud. 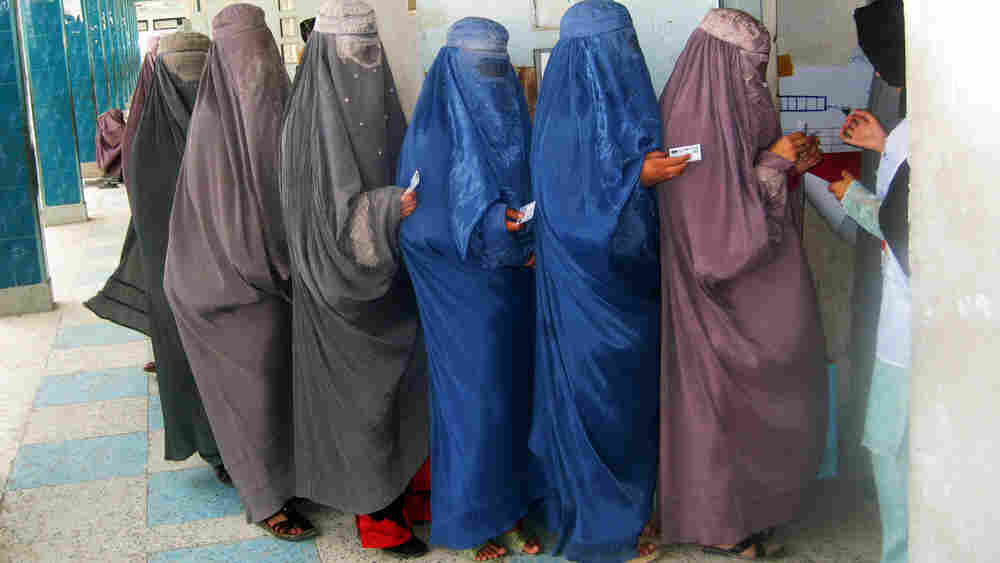 Women in Kandahar, Afghanistan, line up to learn how to vote in the upcoming presidential and provincial elections. But female voters and candidates alike still face oppression and threats of violence. Hamed Zalmy/AFP/Getty Images hide caption 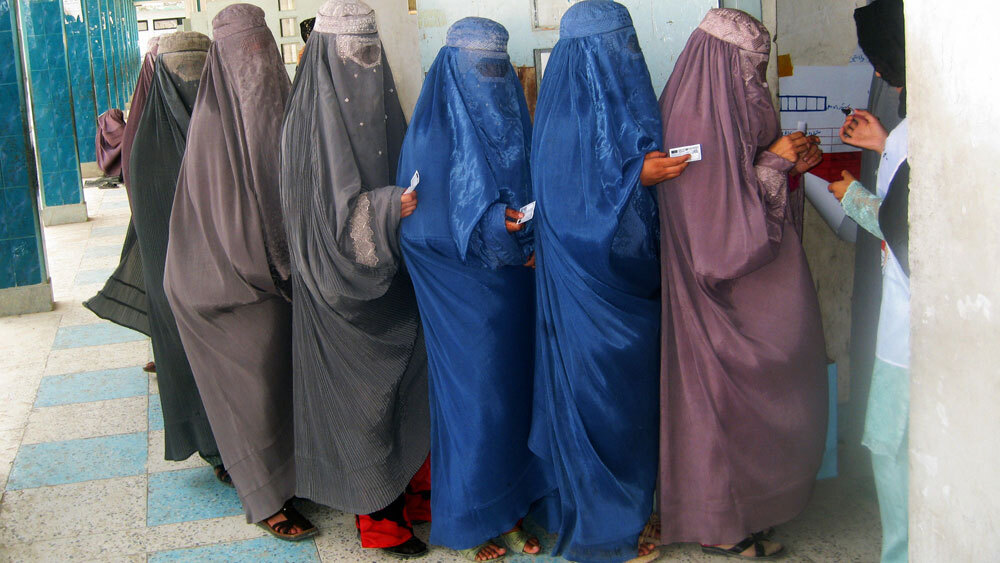 Women in Kandahar, Afghanistan, line up to learn how to vote in the upcoming presidential and provincial elections. But female voters and candidates alike still face oppression and threats of violence.

Women in record numbers are seeking office in Afghanistan's presidential and provincial elections later this month. The participation is a major change in a country where women weren't even allowed to attend school eight years ago.

But the election milestone masks a far darker reality for women in Afghanistan: Many female candidates and voters are facing oppression, threats of violence and fraud. 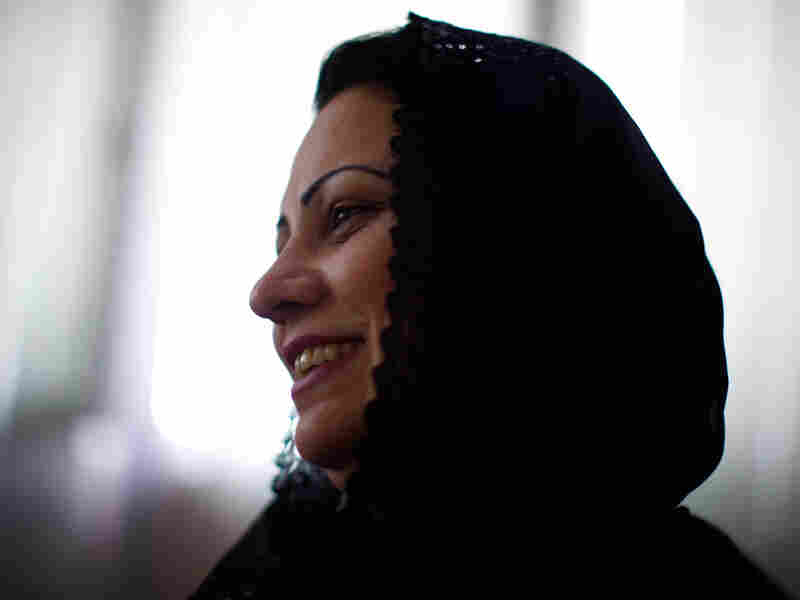 Frozan Fana is one of two female candidates running for the Afghan presidency. She runs her campaign out of a middle-class home in a Kabul neighborhood. David Gilkey/NPR hide caption 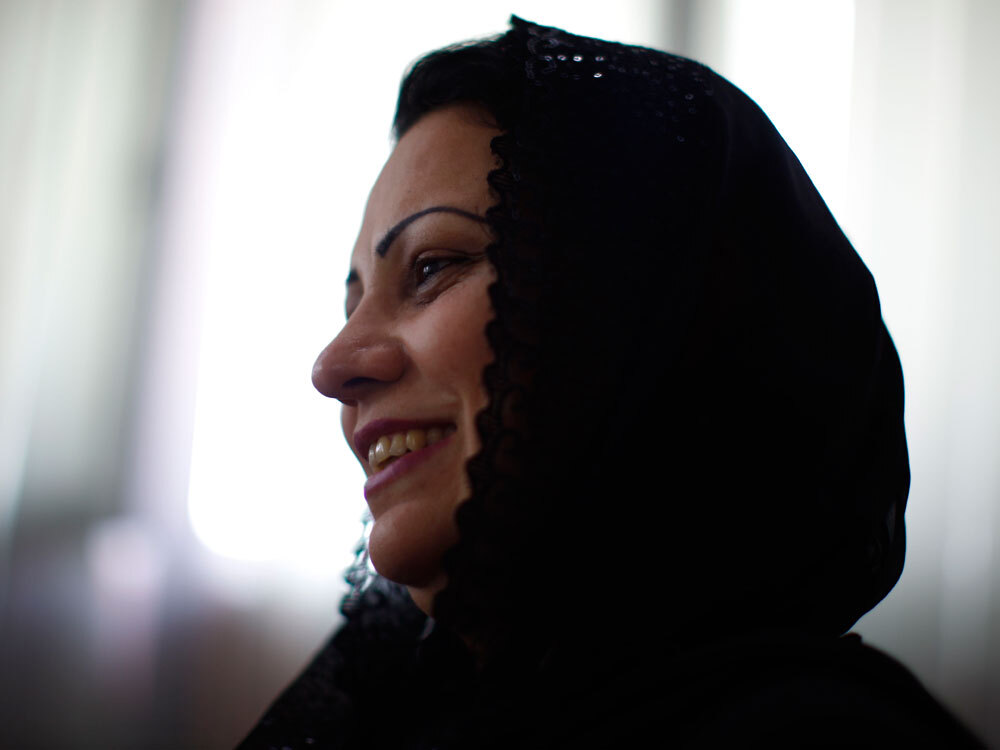 Frozan Fana is one of two female candidates running for the Afghan presidency. She runs her campaign out of a middle-class home in a Kabul neighborhood.

In the eastern city of Jalalabad, U.N. officials got an earful when they recently asked a group of Afghan women about the run-up to the Aug. 20 elections.

Nuristani says Taliban fighters control most of her province. The insurgents vehemently oppose women being involved in politics and have vowed to disrupt the elections.

As a result, Nuristani says, none of the four female candidates running for the provincial council are permitted by their families to campaign in public. Nor do their male relatives allow them to use photos of themselves on campaign posters.

Even In Kabul, Threats Exist

In the capital, Kabul, where Afghan and international forces have tightened security in advance of the polls, female candidates have an easier time reaching out to voters.

Farida Bayat is one of 63 women running for the nine provincial council seats that are set aside for her gender.

The 37-year-old says she has campaigned at schools, local organizations and even the neighborhood mosque. Her face is visible on thousands of campaign fliers.

She doesn't wear the head-to-toe burqa frequently worn by women in Afghanistan. But per Islamic tradition, her hair is covered by a loose-fitting scarf.

"I'm determined to see future generations of girls like my daughter gain confidence by seeing me and other women taking these steps," Bayat says. "Women are half the population of this country and should be taking part in politics and everything else."

Not everyone agrees. Bayat says a man called her two weeks ago to deliver a death threat because she is a woman running for office. She has received other harassing phone calls.

Her husband, Lutfallah Bayat, says he fears for her safety and has asked her not to travel outside the capital.

"Sure I'm frightened, because some people are just ignorant and violent. They think that being Muslim means their women must stay at home. They don't understand that women should work and be in the government. This is what has kept our country from advancing," he says.

In a June report, Afghanistan's Independent Human Rights Commission said it had received 15 formal complaints from female candidates about intimidation.

And even though there have been no reports of violence against women running for office so far, the Ministry of Interior was concerned enough to start assigning a policeman to any female provincial candidate who requested one.

Sima Samar, who chairs the human-rights commission, says it is not just Taliban militants who are impeding women in this election. She says female candidates are also stifled by chauvinistic traditions and a lack of campaign funds.

She also accuses the country's male presidential candidates of setting a poor example for other Afghan men. She says women are almost invisible in their campaigns, even at their rallies.

"You see a small group of people in one corner, but the rest are all men. And this is sad. This shows the reality of the country," she says.

Many Afghans, such as Wadir Safi, a political analyst who teaches law at Kabul University, fear women's voter cards will be sold to the highest bidder. Safi says such fraud is hard to prevent given that women are so restricted in Afghan society.

Women aren't allowed out of their houses, so a person could come to the commission and say he is representing multiple houses, with multiple women, and the commission would have to turn over the voter cards, Safi explains. 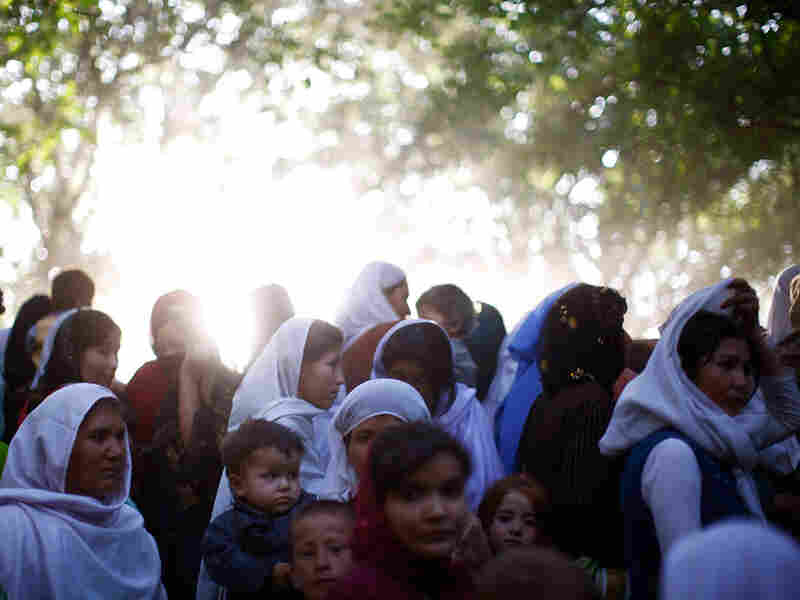 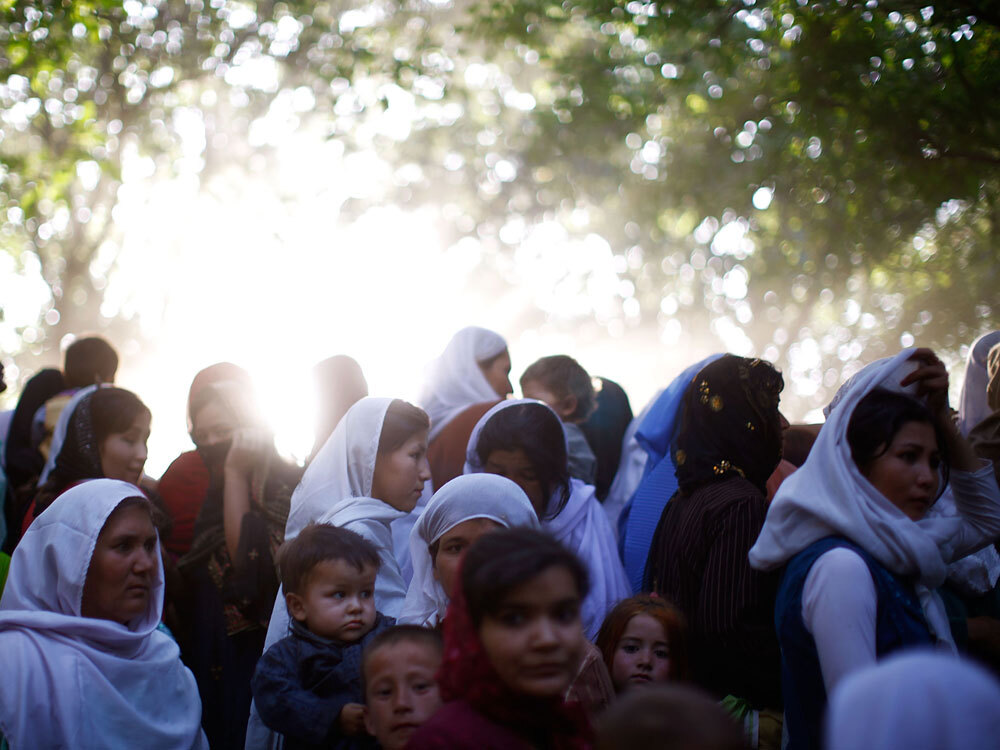 Several thousand men, women and children from four northern provinces of Afghanistan gather to meet their spiritual leader in the remote Dar-e-Kayan valley on July 3 — a day before President Hamid Karzai arrived.

"It's a fraud. They've paid the money to collect such cards and it goes to the ballot box of one candidate," he says.

But Afghan election officials insist that on Election Day, only one vote will be allowed per person. They say that men will not be allowed to cast ballots for their female relatives.

The officials add that after Afghan voters cast their ballots, their fingers will be stained with an indelible ink that can't be removed for several days.