Accessibility links
When The Doctor Calls And It's Good News Across the country, doctors are experimenting with a health care model that puts the focus on individualized, preventive care. In so-called medical homes, doctors are rewarded for using longer visits, phone calls and e-mails to keep patients healthy. 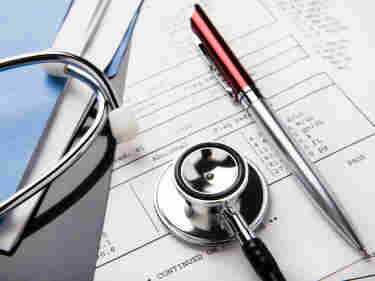 When President Obama and other Democrats talk about changing the health care system, one phrase that comes up is "medical home." It's an attempt to reinvent primary care medicine and reward doctors who practice preventive care.

From a doctor's perspective, the medical home is not a place. It's a solution to a problem.

Under the current health care system, doctors "see as many patients as you humanly can in a day and charge the insurance company as much as you can per patient," Dr. Jay Fathi says.

What if, instead, Fathi says, doctors could see fewer patients in a day and focus on keeping them healthy — even bonding with them — and in return, they'd get paid extra?

Fathi is a director of primary care at Swedish Medical Center in Seattle, where one of the many pilot projects across the nation is taking place to see if the medical home model can save money.

Its Ballard neighborhood clinic looks like any other medical office, and it is very quiet. Occasionally, the phone rings. The waiting room is almost empty. And that's how it's supposed to be.

The medical home concept was originally developed by the American Academy of Pediatrics in 1967 as a central location for children's medical records. It evolved into a one-stop shop for continuous, family-centered health care.

"One of the goals of the medical home model is that you don't wait at all, that someone puts you right into the exam room, and people are there to see you right away," says Dr. Carol Cordy, the lead physician at the home. On their first visit, she says, patients spend a full hour with a doctor.

"It's really a luxury to be able to sit down and actually listen to a patient — and not have my own agenda because I have two or three more patients waiting," she says.

All medical homes offer some sort of extended visit.

"If you have a really short visit, your tendency is to order a bunch of tests because you don't have time to figure it out, and if you had more time, you wouldn't order all those tests," Cordy says.

That all sounded pretty good to Karri Patton. This spring, she walked in with a sinus infection that had been bothering her for more than a month.

"They know who I am, and they actually ask how you are feeling," Patton says.

Patton owns a nail salon and has no health insurance. Here, she pays a flat fee: $45 a month, which covers everything that can be done in this office, including most basic tests. "If I need something, I don't have to worry about how much is in the checking account, how much do I have left over to get myself medically treated," she says.

Her $45 doesn't include specialists or hospital care. For those items, she's on her own.

On the other hand, most patients at this clinic are covered by Medicare, Medicaid or private Blue Cross insurance, which also charges a flat monthly fee. Those patients can go to a specialist outside the clinic whenever they choose.

Other medical homes have come up with different payment schemes, but they all focus on easy access to care. As Cordy says, easy access is possible for so many patients because it doesn't have to be in the clinic.

"You are taking care of them in a different way, with telephone calls, with e-mail, so that your number of visits goes down because you are not seeing a patient as often," Cordy says.

Being accessible during off hours, via phone or e-mail, may also reduce the number of emergency room visits. If it does, it'll save money for the insurance companies, so they'll pay doctors a bonus the following year.

Insurers will also pay bonuses for keeping patients healthy. So, behind the scenes, the office is keeping track of patients, especially if they have a condition such as diabetes or asthma. Dr. Paul Grundy, the founder of a group that's promoting medical homes, says some doctors tell him they already do all that.

Grundy is an executive at IBM, which is pushing the medical home model as a way to keep workers healthier and save money. He says the primary doctor should be playing sort of a quarterback role, keeping tabs on what various specialists are all prescribing and taking care of medical questions that really don't need a specialist. That caught the attention of Dr. Peter Mandell and his colleagues.

Specialists aren't the only ones with concerns. Some family doctors may not be ready for behind-the-scenes changes, such as having a sophisticated electronic record system to monitor their patients.

The final judgment on the medical home approach will come from two measures: Are the costs really lower? And are the patients healthier and happier?