Accessibility links
Businesses Learn To Make Do With Fewer Workers Since December 2007, the labor market has seen a net decline of 6.5 million jobs. Instead of replacing workers, many employers across the country are operating with leaner, more efficient staffs. 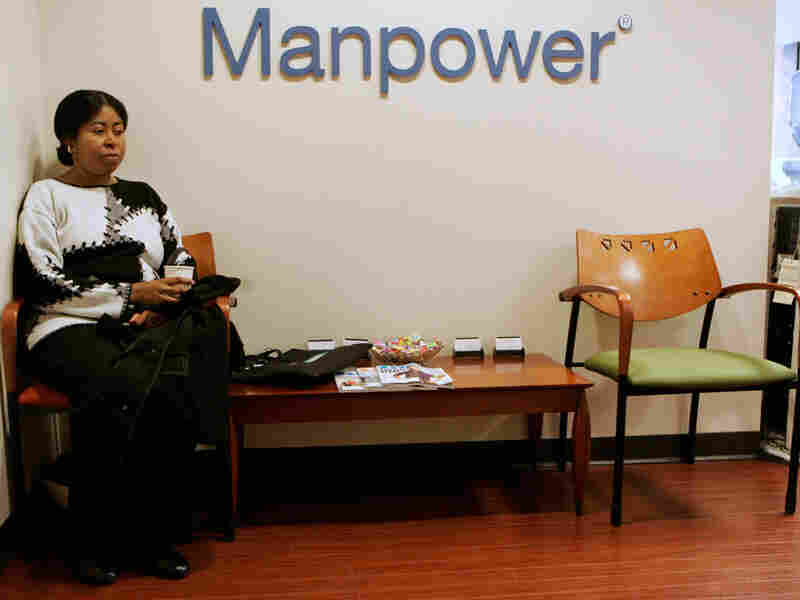 Linda Short waits to talk to a staffing specialist at Manpower, a temporary job placement firm, in San Francisco. The agency says that even when the economy improves, some of her clients won't staff back up to prior levels. Marcio Jose Sanchez/AP hide caption 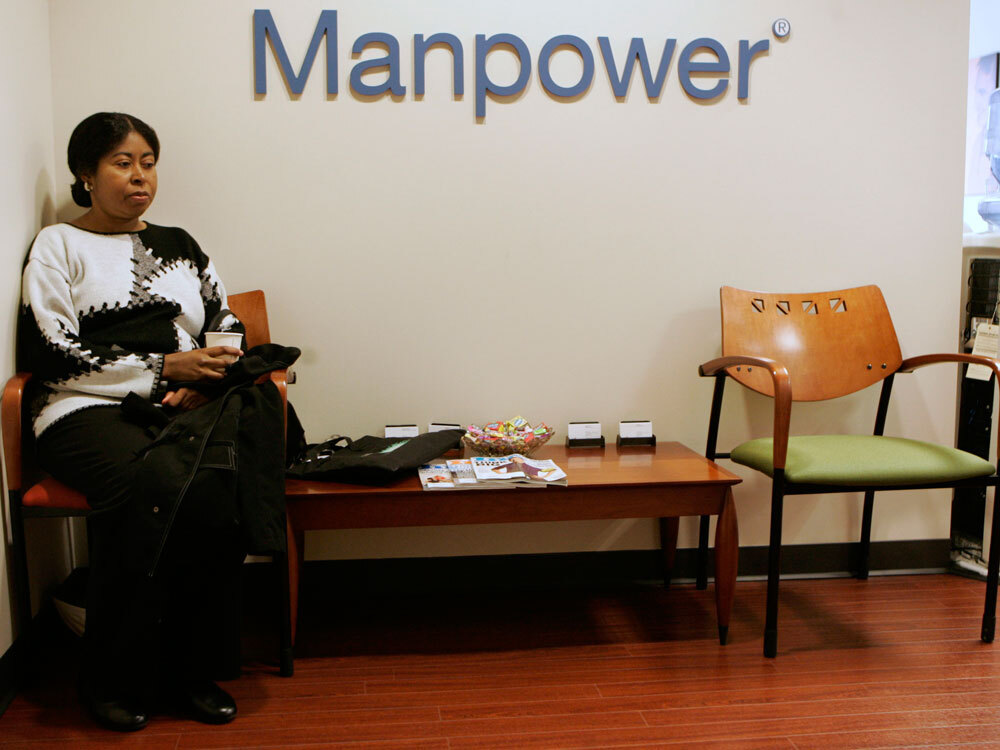 Linda Short waits to talk to a staffing specialist at Manpower, a temporary job placement firm, in San Francisco. The agency says that even when the economy improves, some of her clients won't staff back up to prior levels.

The government is expected to announce Friday that the job market shrank again in July. With the jobless rate nearing 10 percent, most of the focus will be on layoffs. But there's another reason so many people remain out of work: Employers, still worried about the recession, are creating far fewer jobs these days.

At Seibel's Restaurant in Burtonsville, Md., waiter Joey Rosenberg is wrapping up the lunch shift. He fills pepper shakers and sweeps the dining room floor. Since the recession began, the 21-year-old seems to do a bit of everything.

"You're pretty much doing, at any given time, more than two jobs," he says. "Like today, we didn't have a buser, so I was bussing all my tables and everything."

Tomorrow, he shifts from waiting tables to working the register.

The reason is simple: Seibel's has 10 fewer workers today than it did at the beginning of the recession, so the remaining staff is picking up the slack.

Since December 2007, the labor market has seen a net decline of 6.5 million jobs. What's happening at this small, family-owned restaurant just north of the nation's capital is happening in workplaces across the country. Instead of replacing workers, employers are operating with leaner, more efficient staffs.

Lynn Martins, a co-owner of Seibel's, says the smaller workforce saves the restaurant $4,000 in payroll each month — a big help to the restaurant's bottom line, but tough for anyone who might want a job there.

"We probably stopped giving out applications a good two months ago," she says. "We were probably having four or five people a day coming in."

Job openings around the nation have plunged by more than a third in the past year, according to the Bureau of Labor Statistics.

In real terms, that means there were about 1.5 million fewer job openings in May than the same month a year earlier.

Martins says that until the economy turns a corner, she's reluctant to add workers.

"Looks like we're going to be able to make things work with the crew that we have," she says, adding that an employee who just left won't be replaced.

For the labor market to rebound, not only do employers have to stop laying off so many people, but they've also got to start hiring a lot more.

Katz says many people on short hours are waiting for the economy to pick up so they can work more.

"Even when some employers start seeing improvements in demand for their product, they still have plenty of ability to increase the hours of their existing workers, before they need to start hiring new workers," he says.

"We really think this is going to be a gradual and slow climb out of the hole," says Cathy Paige, a vice president with temporary service giant Manpower.

Paige says that even when the economy improves, some of her clients won't staff back up to prior levels.

"For example, the casinos. We were there recently on a tour, and they don't have people making change anymore," she says. "They have machines to do that."

Paige says another client — a business services company — has responded to the recession by sending more work overseas.

"We've probably lost 30 percent of our workforce there. They called back a few people this week, but we used to get orders there for 200 or 300 people at a time, and now we consider a big order 25."

Martins says she always kept an eye on costs, but the economic downturn forced her to run a leaner business than ever before.

"We learned to do it with less people, they learn to cover more territory, they get better at their job, which kind of weeds out needing extra people," she says. "And sometimes more is not always better."

For businesses like Seibel's, that may be one of the biggest lessons — and legacies — of this recession.