Accessibility links
Treating Delirium: An Often Missed Diagnosis When Earle Helton was hospitalized earlier this year, his medications caused him to suffer an episode of delirium. Helton isn't alone. About one-third of seniors who are hospitalized experience delirium, which is sometimes preventable. 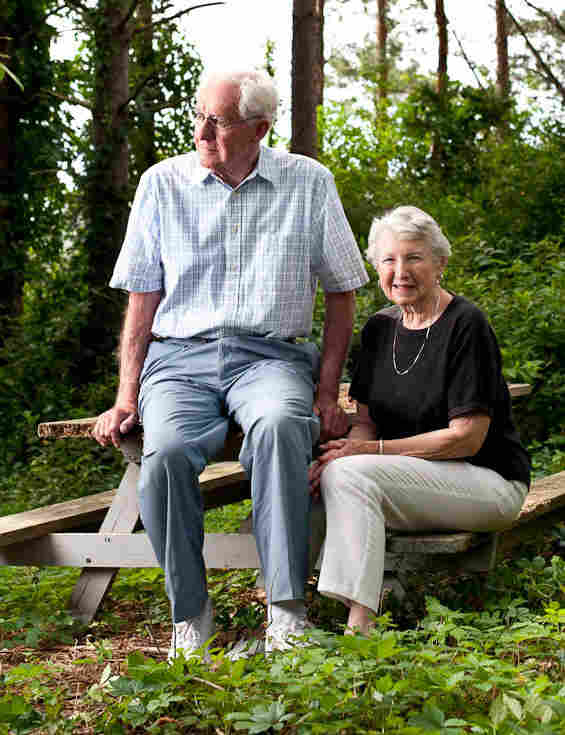 Earle and Virgina Helton sit outside their Massachusetts home. When Helton was hospitalized earlier this year, he suffered from delirium but recovered after his doctor took him off an anti-seizure medication. Wiqan Ang for NPR hide caption 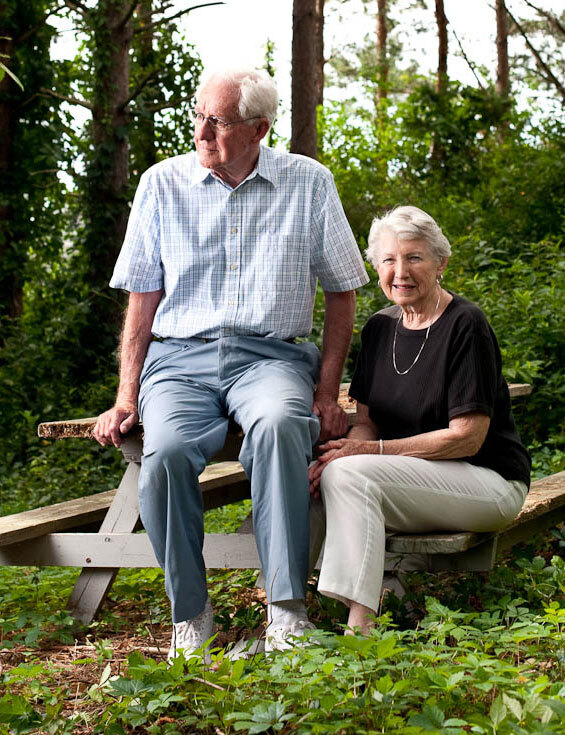 Earle and Virgina Helton sit outside their Massachusetts home. When Helton was hospitalized earlier this year, he suffered from delirium but recovered after his doctor took him off an anti-seizure medication.

Virginia Helton says her husband is a "brilliant" man. He's a scientist who can explain complex chemistry and physics. But when he was in the hospital last February, she didn't recognize the man acting so bizarrely — talking wild nonsense and taking off his clothes.

Earle Helton, 79, was diagnosed with delirium, a sudden and frightening onset of confusion. A common but often unrecognized problem in hospitalized elderly people, delirium is estimated to affect more than 2 million seniors a year.

"I was feeling very scared," his wife says. "It was very disturbing to see him in all this confusion with disordered speech."

"I remember quite vividly my desire to escape, and [I] was proposing all sorts of fantastic schemes, according to the kids, as to how I could get out and get out of the hospital," Earle Helton says. "As a matter of fact, I ended up executing that on at least one occasion and managed to get through the hospital and underneath one of the surgical beds."

Virginia Helton says staff at the hospital "tied his hands down because he kept trying to get out of the bed, and that made him furious. And they did that several times when he was in this state of delirium."

Dr. Sharon Inouye was working at the Boston hospital where Helton was a patient. She recognized he was on an anti-seizure medication that could cause confusion. She stopped the medicine, but it took a few days for the drug to clear his system and the delirium to stop.

Inouye, a geriatrician at Harvard Medical School and Hebrew Senior Life, says it's easy for doctors to miss delirium. Most of the time, a person with delirium is inattentive and may have trouble following a conversation. Sometimes, the symptoms are more obvious.

"What we look for is a person who is having a lot of difficulty answering questions," Inouye says. "They often will not make sense. They may hallucinate. They may be very agitated. They may have a totally different personality. You know, very often family members will say to me: 'He's nothing like that at home.' "

Inouye saw delirium in her own father, who was also a physician.

"My father wound up getting delirious even when I was there at his bedside," she says. "I'm an expert in delirium, and I couldn't prevent it from happening."

Inouye attributes it to hospital care that has become complex and fragmented.

"There were just so many physicians taking care of my father, so many medications," Inouye says. "It was really hard for me to keep track of everything. You know, I knew there were certain medications he couldn't tolerate, and I told one group of physicians, and then another group of physicians would prescribe it. And so it really just was quite eye-opening for me."

If one of the world's leading researchers on delirium couldn't protect her own father, the average American might feel helpless, too.

Still, there are precautions a patient's family can take. Family members can start by becoming more aware of the drugs that cause delirium, says geriatrician Malaz Boustani at Indiana University School of Medicine.

One class of medications that can be a big trigger is anti-cholinergic medications or common prescription and over-the-counter drugs such as some sleeping pills, asthma medications and antidepressants.

It's also important for older patients in the hospital to keep using their eyeglasses and hearing aids and be allowed to sleep through the night, says Boustani. Delirium can be triggered by a state of confusion, and these things help maintain a more consistent environment.

Boustani recently studied 1,000 senior citizens who came to an Indianapolis hospital. One-third developed delirium. And those who spent more time in the hospital had a higher risk of going to a nursing home or of dying.

Doctors often dismiss delirium, Boustani says, because they think it's just dementia in older people. The two are different. Delirium is a temporary form of cognitive impairment, whereas dementia is a more long-term problem that involves issues with at least two brain functions, such as memory loss along with impaired judgment or language.

Still, there's a link between dementia and delirium.

"What we found [is] that if you develop delirium in the hospital and we follow you up to five years, the odds of developing dementia or Alzheimer's disease is five times more," Boustani says. "And the question is: Is it the delirium itself that caused toxic insult to the brain and then triggers spiral evolution to develop dementia? Or was the delirium simply a positive stress test for dementia?"

Boustani suspects that an episode of delirium shows dementia that already exists or is developing. But other researchers suspect that getting delirium in the hospital can cause long-term dementia.

That's one more reason why it's important for researchers, doctors and patients to better understand delirium that occurs in the hospital — and how to avoid it. Boustani says studying delirium appeals to him because it's one condition in the elderly that can be reversed, not to mention something he just might encounter in the future.

"It's a fulfilling feeling as a doctor," Boustani says. "At the same time, I want to live as long as possible."

He says that if he lives that good, long life, the chances are that he'll be an elderly man in a hospital one day. "I want to be proactive and make sure the system is ready for me."