Accessibility links
Wizard Rock: Harry Potter Goes Punk As the world awaits the last book in the Harry Potter series, several artists have used the Hogwarts characters as inspiration for a different genre: punk rock. The genre started with two Boston-based brothers who make up the group Harry and the Potters. 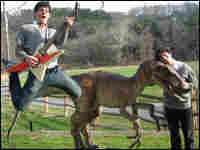 Wizard rock dares to answer the question: What would Harry sing, if he were in a band? hide caption 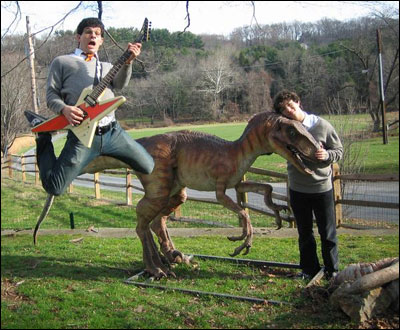 Wizard rock dares to answer the question: What would Harry sing, if he were in a band? 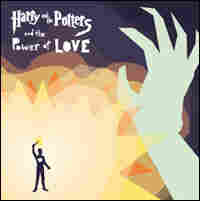 Harry and the Potters' latest CD, Power of Love, features songs like 'New Wizard Anthem,' 'Smoochy Smoochy Pukey Pukey' and 'In Which Draco Malfoy Cries Like a Baby.' hide caption

'Save Ginny Weasley' from Harry and the Potters

'Platform 9 and ¾' from Harry and the Potters

As the rest of the world awaits the last book in the Harry Potter series, several artists have used the Hogwarts characters as inspiration for an entirely different genre: punk rock.

The genre started with two Boston-based brothers, Paul and Joe DeGeorge, who make up the group Harry and the Potters. On stage, the brothers wear Potter's trademark gray sweaters accented with maroon, yellow ties and thick black glasses.

Five years ago, the DeGeorge brothers invented the genre of "wizard rock" as a joke in their backyard, to answer the question: What would Harry sing, if he were in a band?

The Potters take on many topics, all dealing with themes from J.K. Rowling's popular series. The duo recently finished touring Europe, and its North American tour will take it to more than 60 cities across the country. In each location, hundreds of fans travel to see them play.

The Potters have also inspired other "wizard rock" bands like Draco and the Malfoys, The Whomping Willow and The Remus Lupins. Like the Potters, these bands also travel the library circuit.

Josh Koury is making a documentary with his friend Gerald Lewis about Harry Potter fandom.

"We've found that over the years they have this clan of people, much like the Dead did, who travel show to show," Koury says.

Chaya Coppersmith traveled from Staten Island with her sister Miryam and her mother Suzanne Bernstein to see her fifth Harry and the Potters concert.

"You go and you see the movies and they cannot portray the books as well as they do in their music," she says. "Their music just captures the essence of the books so much better than any sort of other media has been able to do. That's why I love it. It's great."

Her mother admits that she prefers the music over the movie versions of the books, and even sometimes the books themselves.

"It's almost like the first time you read the book, but with music you can listen to it over and over again, so it's very cool," Bernstein says.

That sense of community is important, says David Grazian, who studies the sociology of pop culture at the University of Pennsylvania.

"We're used to thinking about reading as an individual kind of cultural practice," he says. "This is a way for people to enjoy these books and these themes in the company of fellow fans."

Cindy B. Haynes, the children's librarian at the Fairfield Public Library in Fairfield, Conn., says she's amazed that more than 100 people have showed up to the library on a Friday night to see Draco and the Malfoys and The Whomping Willow. A typical Friday, she says, draws maybe 10.

"These kids are clearly still following [the series]," she says. "And everybody's going to read that last book, see what happens."

But the last book, warns Grazian, may mean the end of wizard rock.

"Wizard rock will likely lose its novelty," says Grazian. "Indie-rock fans are very, very devoted music fans, but can be very fickle and will be on to the next thing before you know it."

But Josh Koury doubts the music will go away entirely.

"Part of the excitement is waiting for the end and not really knowing where it's going," he says. "I think a part of it will stay alive."