Accessibility links
How Green Are Reusable Bags? They have become as much a fashion statement as a political one. From the Whole Foods Market to Home Depot, stores are jumping on the reusable-bag bandwagon, delighting many eco-minded shoppers. But bagger, beware! Not all reusable bags are created equal. 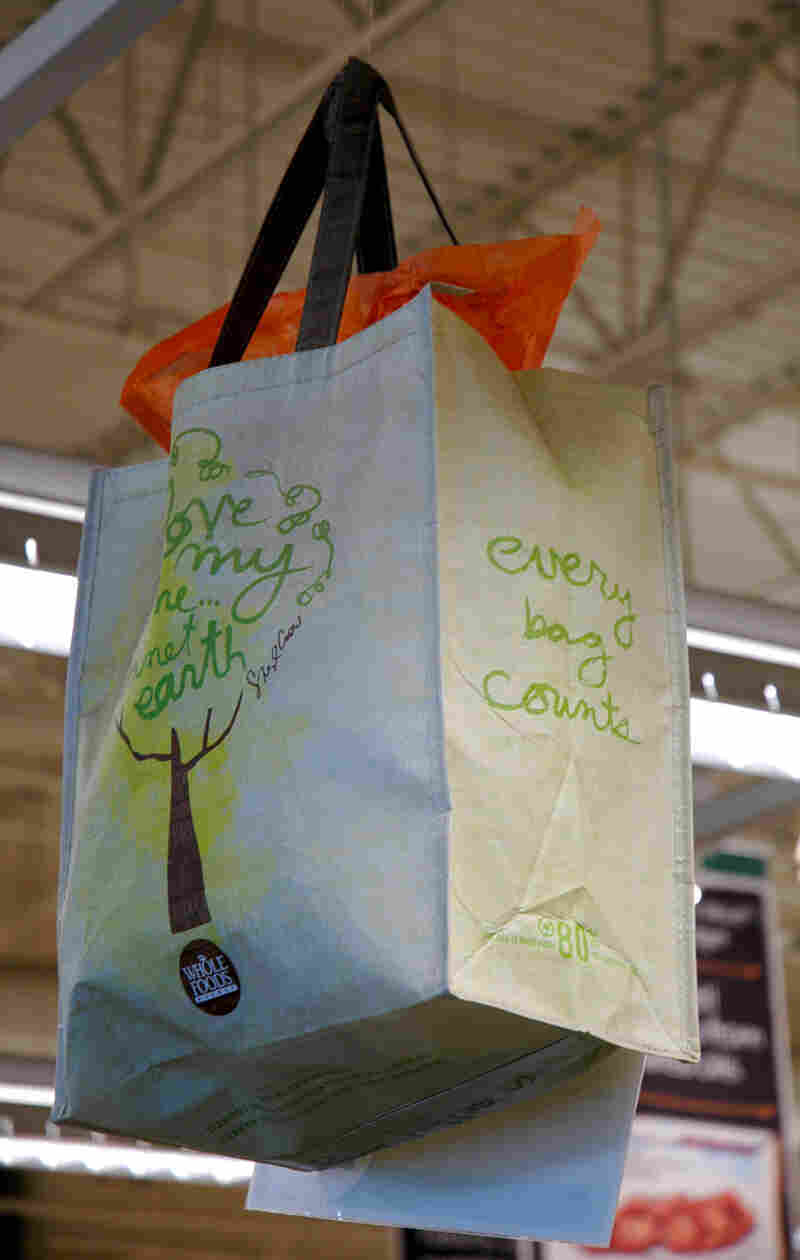 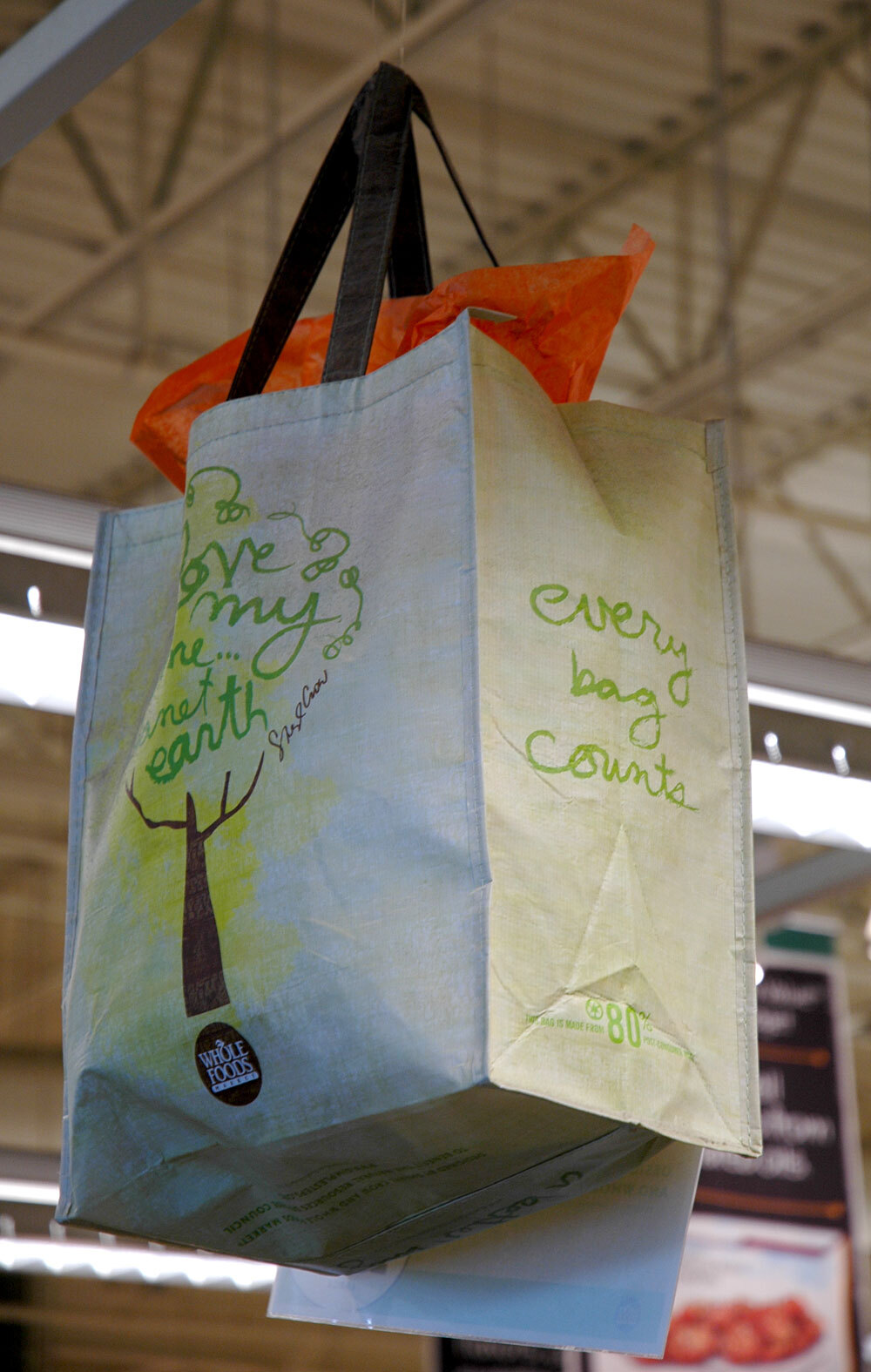 A reusable bag at the Whole Foods in Cambridge, Mass.

This story is part of a series called How Green Is It? that will air throughout August on All Things Considered. The series examines some of the things Americans are doing — and buying — to help the environment and whether those steps really are as "green" as they seem.

Business are selling them, even giving them away hoping they will replace those plastic grocery bags that have become something of a poster child for environmental waste and destruction. From the Whole Foods Market to Home Depot, stores are jumping on the reusable-bag bandwagon, delighting many eco-minded shoppers.

"I think they're great! I love it," says Susan Klein, 42. "I have about five of them that I use all the time — for everything!"

But bagger, beware! Not all reusable bags are created equal.

The Whole Foods bag, for example, is made of mostly recycled plastic — ecologically better than a bag made from PVC or with harsh chemical dyes, for example. But the bags are also shipped thousands of miles from overseas. So every reusable bag is a mixed bag, baffling consumers and experts alike.

"There are a lot of different characteristics," Hoover says. "And it can be hard to say, 'Organic and fair trade and local cloth is better than recycled content polypropylene from China.' There are too many parameters to come up with a clear winner."

Stores too struggle with the trade-offs. Last year, Wal-Mart started selling a black bag that was made entirely from recycled bottles. Now, it offers a cheaper blue bag that is thinner and uses less plastic. On the other hand, however, only a third of the plastic in the new blue bag is recycled. And, it lasts only about half as long as the black one.

"I think we are living in the land of confusion right now as we migrate through what is less bad into what is truly good," Greener says. "This is an evolving and a moving target."

It all leads even the experts to the very unscientific conclusion about what shoppers should buy.

"My first answer to that would be, 'What draws your eye?'" Hoover says. "Buy the bag that you most personally are going to reuse, because that's the most important thing."

So if some gritty hemp weave appeals to you, or if it's a little bling, or the $1,000 dollar Hermes silk shopping bag that turns you on, "by all means, buy that bag," Hoover says.

Eventually, you will hit the environmental break-even point. That is, as long as you use the bags and don't just leave them to collect dust somewhere.

"I always forget [my re-usable bags.] So they sit in the car," says Paul Briner, a contractor in Boston, loading his groceries into a paper bag at the check-out of the Whole Foods Market.

"I still prefer the plastic," says another shopper, firefighter Rob Williams. Whole Foods offers only paper bags, but when he's shopping at other stores that still offer plastic, "I always take the plastic," Williams says. "I'm just being honest."

Many stores are hoping financial incentives will help change hearts and habits. Whole Foods offers a nickel, every time you BYOB. Other stores offer points and prizes.

Bob Lilienfeld, editor of the Use Less Stuff report, says it may be years before most Americans really change their ways.

And it's not only habits at the grocery store that will need to change. Once people no longer have a ready supply of old grocery bags stashed at home, they will have to find new ways to pick up their dog poop or line their bathroom waste baskets. If people just go out and buy other plastic bags, it will defeat the purpose.

Ultimately, even if we eliminate billions of grocery bags from the market, how much good will it do?

"I hate to say it, but not much," Lilienfield says.

In the big picture, he says, the big fuss around shopping bags is really just a distraction.

"The bag is not the environmental bogey-person that everybody thinks it is," he says. "If you look at the entire grocery package that you bought, the bag may account for 1 to 2 percent of the environmental impact.

"The other packaging may account for 7 percent. Ninety percent is accounted for by the products you buy. That's where all the environmental impact is."