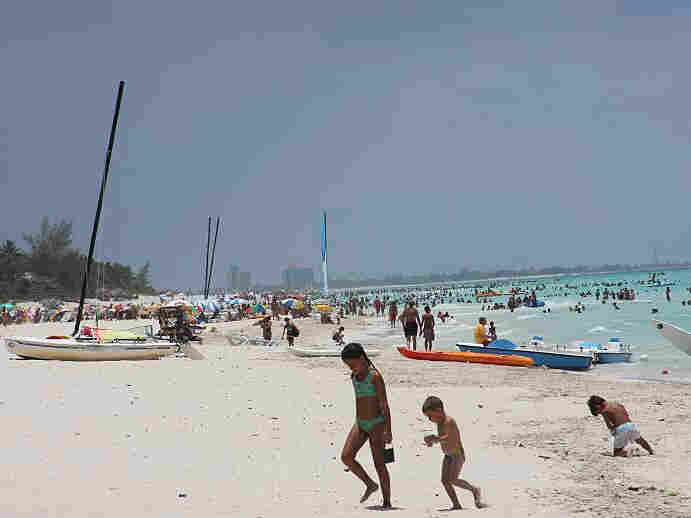 Miles of beaches and a wide selection of hotels have long lured foreign tourists to Varadero, Cuba. Under a new government policy, Cubans can now buy week-long, all-inclusive packages and soak up the sun alongside tourists from Canada and Europe. Nick Miroff for NPR hide caption 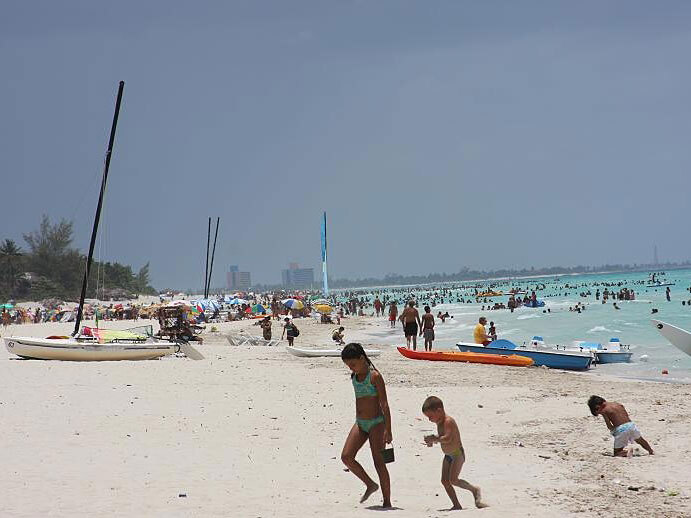 Miles of beaches and a wide selection of hotels have long lured foreign tourists to Varadero, Cuba. Under a new government policy, Cubans can now buy week-long, all-inclusive packages and soak up the sun alongside tourists from Canada and Europe.

The change has brought something new this summer to the island's all-inclusive resorts: Cuban tourists.

With 12 miles of white sand beaches and more than 50 hotels, Varadero is one of the largest resorts in the Caribbean. Foreign companies partner with the Cuban government to run the place, and it's a bit like Cancun without the American college kids.

Varadero is still off-limits to American tourists under U.S. law, and for years it was pretty much that way for Cubans, too. Cuban workers cleaned the hotel rooms and staffed the restaurants, but the island's communist authorities wouldn't let them check in as guests.

That policy ended with reforms initiated by Raul Castro, who succeeded his ailing brother, Fidel.

Now, dozens of tour buses packed with Cuban vacationers are pouring daily into Varadero. For less than $200 per person, Cubans can buy a weeklong, all-inclusive package and finally claim their places in the sand alongside budget-minded Europeans and Canadians.

Cuban vacationer Lorenzo Yeras said there was not a single foreign tourist on the bus from Havana.

"They were all Cubans. And that's something that makes me really happy. Not that I have anything against foreigners, but it's really nice to see so many Cubans together, sharing that happiness and excitement," Yeras said as he arrived at Varadero's Cuatro Palmas resort.

If the Castro government's old policy was intended to enforce some degree of socialist equality, its removal of the restriction is the latest sign that a growing number of the island's residents have money to spend.

"You know, this is how it works in the rest of the world. Either you can afford something or you can't," said Felix Beatoy, an actor at one of the resort hotels. "It didn't make sense that a Cuban wasn't allowed to stay in a hotel even if they had the money. We've fixed that — just like Cubans not being able to have cell phones. Now, if the offer's there but you can't afford it, that's a different problem."

A Welcome Change For Cuban Americans

The change is also a welcome one for Cuban Americans returning to the island to visit family. They used to rely on illegal rentals, bribes or other schemes in order to vacation together. But now Cuba's tourist resorts are playing host to large family reunions.

Tampa resident Ileana Perez left the island six years ago, and she grew tearful describing how she had saved her wages for three years in order to treat nine of her family members to a Varadero vacation.

"I see this as a good thing," Perez said. "At least nine people can come eat and enjoy themselves. But I would have liked to bring more of my family. I'd like them to be able to come here without having to depend on me. They shouldn't have to wait for a family member to come from abroad just to enjoy their own country. And that really hurts."

Foreign tourists in Varadero have long enjoyed a kind of alternate Cuban reality, a sunny world of all-you-can-eat buffets in a country accustomed to food rationing.

It is a strange twist in the communist country's awkward embrace of international tourism. Many of the fiercest critics of the island's socialist system now find themselves straining to enjoy the beach, knowing so many others can't afford to do the same.

Miami resident Karel Alemany left the island a decade ago, and while his family members seemed to be enjoying themselves by the pool, his thoughts were elsewhere, with the real Cuba beyond the beach.

"What about the other 11 million people that live here? What if they don't have someone else that comes to Cuba to take them to some place? How do they live, how do they eat? That's something that you got to think about," Alemany said.