Accessibility links
In a Cow's Stomach, Novel Approach to Warming New Zealand's contribution to global warming comes from an unlikely source: burping farm animals. Scientists say one way to cut down on greenhouse gases is to remove a methane-producing microbe in cows and sheep.

Listen
In a Cow's Stomach, Novel Approach to Warming 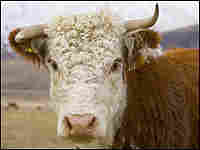 About one-third of the greenhouse gases produced in New Zealand come from animals such as sheep and cows. Momatiuk - Eastcott/Corbis hide caption

Most of the industrialized nations of the world have agreed to reduce the amount of greenhouse gases coming from power plants and factories.

But in New Zealand, one-third of these warming gases come from animals, in the form of methane. So researchers are trying something unique to lower New Zealand's greenhouse-gas hoofprint: They want to change what goes on inside the stomachs of millions of sheep and cows.

Just outside the town of Palmerston North is the Taraua Wind Farm, where hundreds of turbines sit on a ridge overlooking the city. The wind farm is a solution to some of New Zealand's problems with greenhouse gases. But the real problem is right underneath the turbines: the sheep and cows that produce methane.

Harry Clark, an animal scientist for AgResearch, is working on a project that tries to reduce methane emissions from ruminant animals. Clark spends much of his time in a shed among a few dozen cows and sheep at Massey University.

These animals don't know it, but they have a gas problem.

Methane warms the planet 20 times more than carbon dioxide. A ruminant animal creates methane when it digests food in its rumen — a part of its digestive system that works like a fermentation tank.

The rumen is overrun with about 400 kinds of microbes, which break down whatever the animal eats. One of these microbes specializes in making methane.

"And that methane, then, is either burped out or it gets absorbed into the bloodstream, and then breathed out through the lungs," Clark explains.

Ninety-five percent of the methane comes out of the animal's mouth, going up into the atmosphere, and warming the climate.

Scientists suggest that putting a stop to the gas problem could be as simple as getting rid of the microbes. Harry Clark's colleague, Ron Reimus, says they can't see any reason to keep those methane microbes.

"We feel that because they're not absolutely required for survival, that you could get rid of them," Reimus says.

One strategy used is to genetically engineer the microbes so they won't make methane. Another is to give the sheep and cows some type of feed that the bugs won't like.

Graeme Maybey runs a 500-acre dairy farm of 350 cows in Woodville, located along the north island of New Zealand.

Maybey says farmers in New Zealand are aware that methane can warm the planet, and they're not against altering livestock to do something about that methane.

"If we can reduce the release of methane in our cattle, as long as it's not going to affect production of milk and meat, then yeah, we're all for it," Maybey says.

Clark's team attempts to achieve this balance between high productivity and low methane emissions. The team measures everything the livestock eat, how much milk they give and how much they weigh.

Most importantly, Clark says, they measure how much methane is coming out of them with a special type of halter.

The plastic contraption partially covers the animal's nose, and through a pipe, it carries breath exhalations through a tube and then to a collector. Clark and his team measure changes in methane when they alter the microbes in a cow's stomach, or when they give the cow a new kind of feed.

Clark hopes that once the methane-making microbes are gone, the energy they consume will stay in the cow or sheep, and help it produce more milk or meat.

"New Zealand relies on the agricultural sector for its livelihood, and so we can't do anything to stop methane," says Clark. "It's got to get done without detriment to the productivity of the animal, that's a given."

The scientists at Massey University aren't there yet, but if they can figure out how to cut livestock's methane emissions, many countries in the world might be willing to pay New Zealand to solve their own gas problems.