Accessibility links
With Scars Of War, Swat Town's Residents Return More than a million people left the Swat Valley in May when the Pakistani military announced a major offensive to drive out the Taliban. Residents are now returning to Mingora, the biggest center in the valley, eager to restore their lives, but also anxious about what they will find. 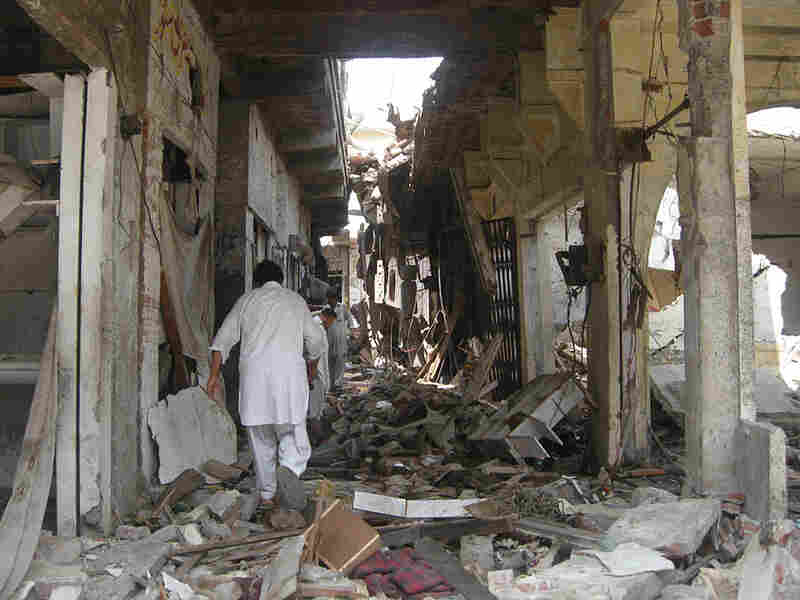 As people return to Mingora, the main town in Pakistan's Swat Valley, they find the buildings are mostly intact. But some, such as these shops, have been reduced to rubble by bombs. Junaid Khan/NPR hide caption 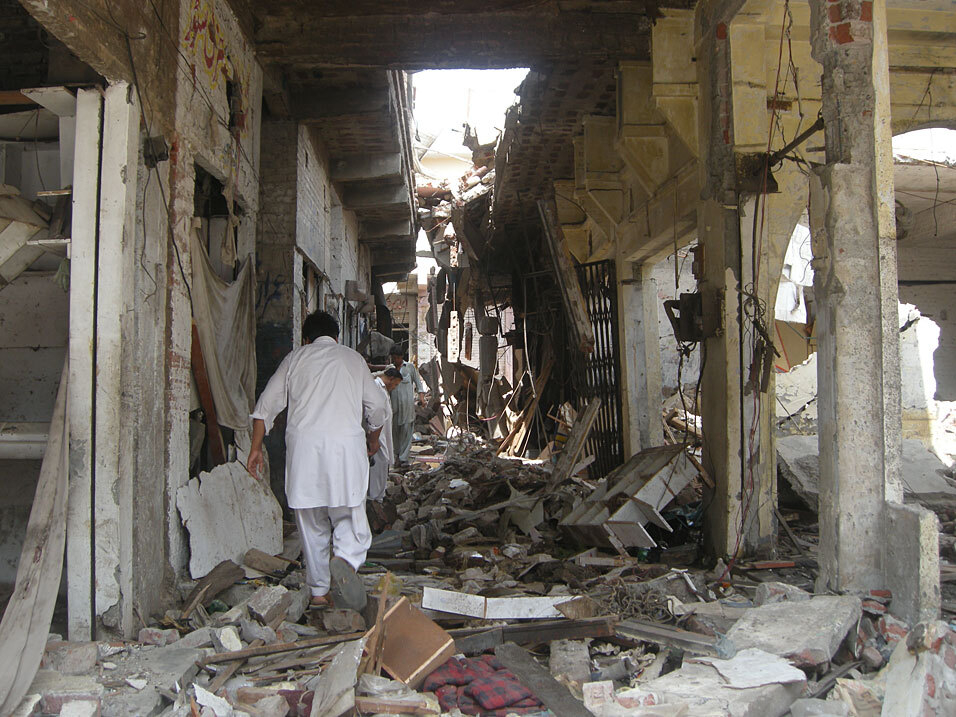 As people return to Mingora, the main town in Pakistan's Swat Valley, they find the buildings are mostly intact. But some, such as these shops, have been reduced to rubble by bombs.

Lawyer Qazi Hidayatullah is delighted the Taliban has finally left his home turf, abandoning its stronghold in one of the world's more beautiful valleys, a place that Pakistanis bill as "the Switzerland of Asia."

He says the militants "treated people like animals" during their brief occupation of his city, Mingora, the biggest center in the Swat Valley, a former tourist haven in northwest Pakistan.

Hidayatullah is far from happy, however, about the personal impact on him of the short war that was required to evict Taliban fighters, driving their leaders back up into the mountains not far from the border with Afghanistan.

Hidayatullah practices law in the high court of Pakistan's frontier city of Peshawar. That means he usually does his work in the English language — or, at least, he did.

"I can speak fluent English, but now I am experiencing this memory loss," said the 56-year-old lawyer, speaking to NPR in his first language, Pashto. "I have lost words. I cannot speak [English]. So this is the impact of the trauma that I have been living through." 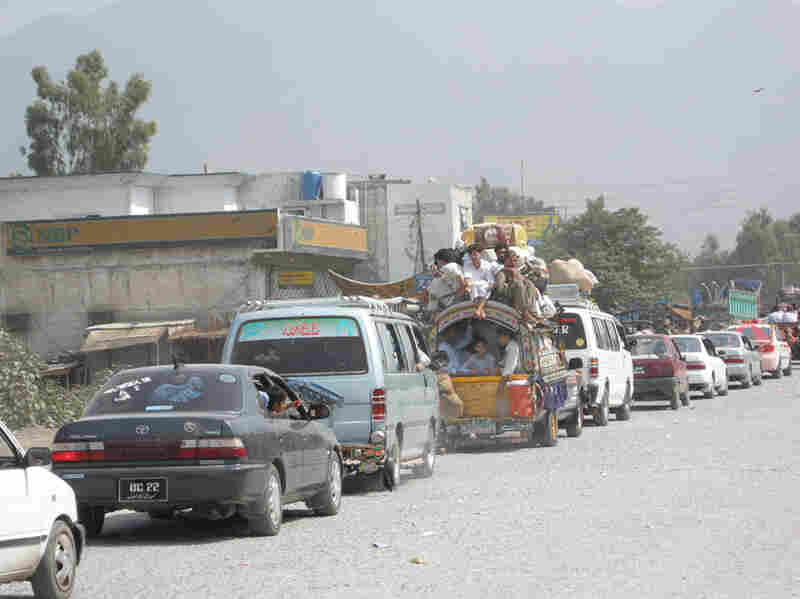 Residents of Mingora drive back to their town, which is the largest in Pakistan's Swat Valley. Junaid Khan/NPR hide caption 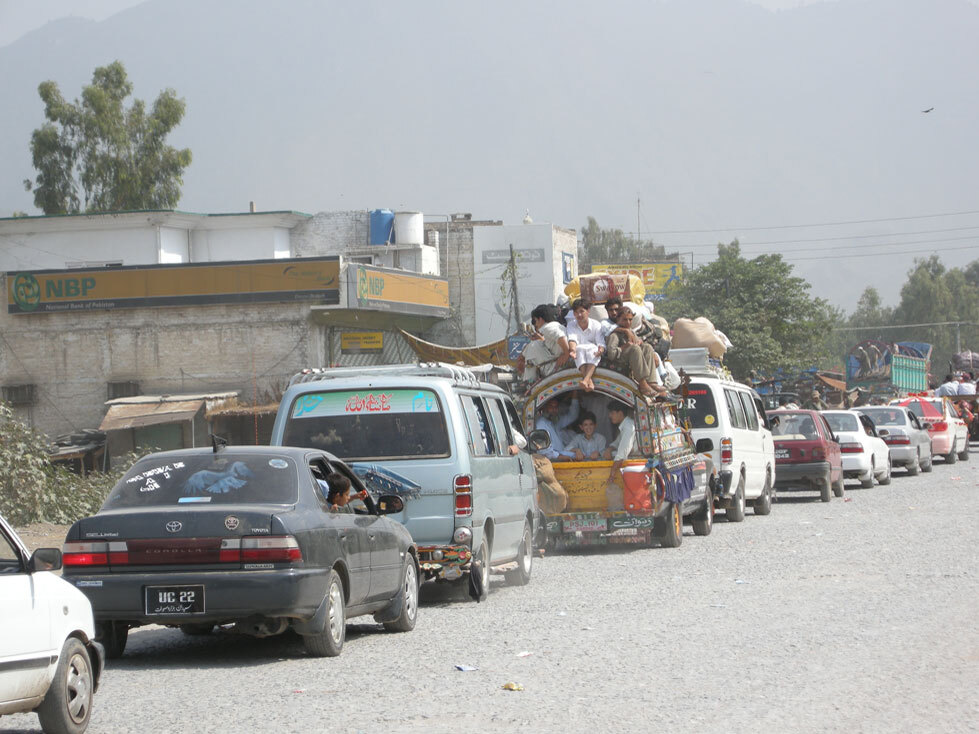 Residents of Mingora drive back to their town, which is the largest in Pakistan's Swat Valley.

More than a million people left the Swat Valley in May when the Pakistani military announced a major offensive to drive out the Taliban after the long-expected collapse of a peace deal with the militants. Hidayatullah said he stayed on because his neighborhood was not on the military's list of the areas likely to be affected. It was not long before machine-gun bullets were slamming into the walls of his home. Eventually, he and his family were trapped. On one occasion, he was shot at in the street by soldiers from his own national army.

Part of Hidayatullah's trauma can be attributed to the Taliban: Accounts of their atrocities in Mingora are true, he said.

"Yes it really happened," he says. "The Taliban would carry out beheadings and they would slaughter people, and they would hang the dead bodies from the trees and lampposts and they would also leave a note asking local people not to take these bodies until a certain time."

The residents of Mingora are now returning home in large numbers, wending their way in trucks, cars and buses through the mountains that link the outside world to the Swat Valley. They appear eager to return to their houses and restore their lives, but also anxious about what they will find. Many, many properties have been looted.

As people flock home, the city of Mingora is once again snarled with traffic. The buildings are mostly intact, but signs of the conflict are easy to spot. Rubble from bombed buildings spills onto the road. Police and soldiers use wrecked cars as makeshift checkpoints. Bullet holes are not hard to find.

Among the multitude who left Swat, and have now returned, is 18-year-old Aimal Hayat Khan. He was born in England and has spent most of his childhood in the city of Manchester, a place that could hardly be more different from Mingora.

He and his family took refuge in Peshawar during the Pakistani military offensive. He sums up the last few months in one word: "traumatic."

"I'm not used to this. I like England more," said Khan, brushing dust of his clothes after spending the morning clearing up a room in his family home that had been hit by a mortar shell. "I want to go back to Manchester. It is more safe."

Khan's life in Swat — with its curfews, power cuts and shortages — bears no resemblance to that of his friends in Manchester. He and his siblings now live with their mother and uncles. Khan says the family is short of money, so his father, an engineer, has returned to England to work.

Khan says he is worried about the future and bored with the present: "When there's nothing to do ... I just collect shrapnel, mortar bombs and I have got a big load of them," he said, pouring some broken shell casings out of a plastic bag. "[These are] a kind of souvenir."

He is concerned the fighting may not yet be over. Many other people in Swat appear to feel the same way. They express frustration and disbelief that the leader of the Taliban in the valley, Mullah Fazlullah, known as "FM Mullah" because of his rabble-rousing radio broadcasts, has managed to escape. Many Swat residents seem to think there is a risk of the Taliban's return to Mingora as long as Fazlullah is at large.

Maj. Nasir Khan, a spokesman for the Pakistani military, says Pakistani forces nearly captured the FM Mullah, "but he escaped."

"[Fazlullah] abandoned his two Land Cruisers and he escaped, taking advantage of the darkness," Khan said.

Although peace is settling on the city, the Taliban and their sympathizers are still being mysteriously killed in Mingora. Dozens of their corpses have been dumped on the streets over the past month. Residents suspect they are being assassinated by the security forces; Khan denies it.

He says he believes the Pakistani army's success in Mingora shows the Taliban is incapable of taking control of any city in Pakistan. Yet, he acknowledges that it will not be easy to rid Pakistan of Islamist militancy.

"This will be a long drawn warfare," he says. "And we are prepared to offer all sorts of sacrifices to contain and eliminate them."