Accessibility links
In Rush To Reinvent, Media Rivals Become Classmates As economic models for the news business crack apart, media executives — from competing outlets — are sharing their headaches behind closed doors at one of the nation's leading journalism schools. David Folkenflik reports. 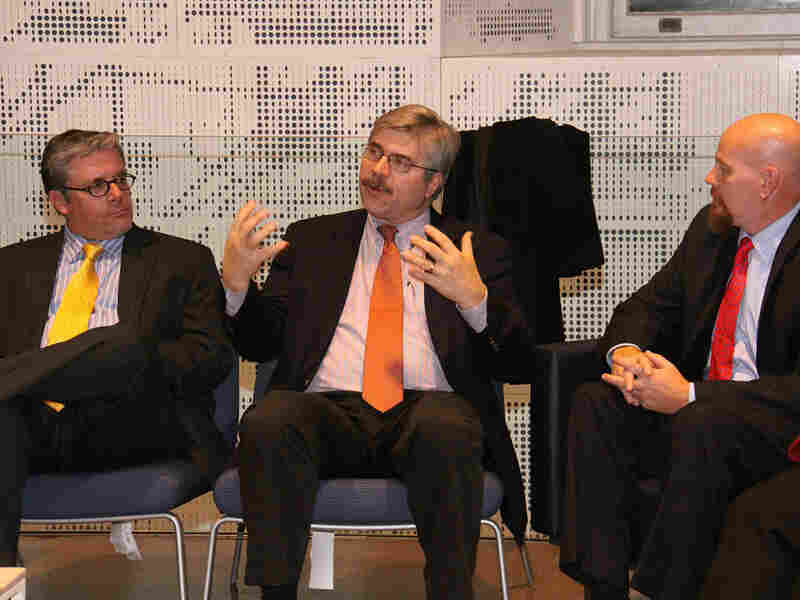 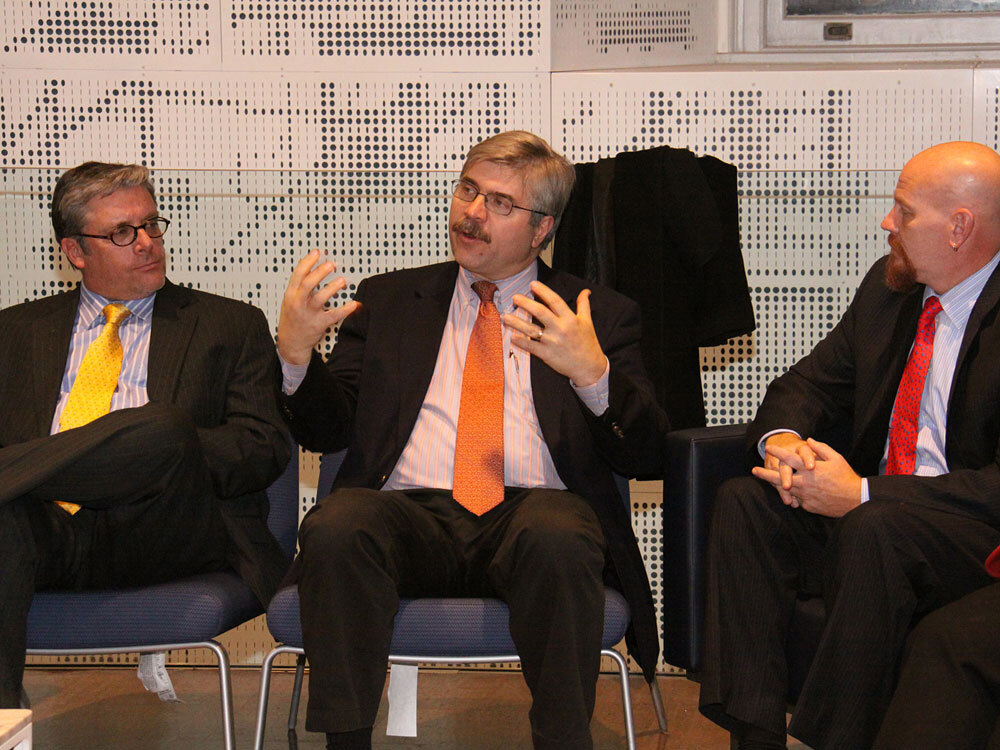 On the sixth floor of the Columbia University Graduate School of Journalism, a group of media executives from news agencies large and small are gathering to share their headaches and seek some specific solutions.

Hard-nosed competitors turn collaborators during the year-long Punch Sulzberger News Media Executive Leadership Program at Columbia. Every few months, they take cabs uptown or fly in from distant locales for week-long sessions in which they spill their secrets.

And it seems pretty clear why.

"It's chaos out there, and there's definitely a sense of terror," said Doug Smith, the program's executive director and a former partner at the corporate consulting firm McKinsey & Company.

"You're seeing [an] industry change before your eyes," Smith said. "I think that makes it rational to say, we all want to find a more sustainable future. To some degree, let's find it together."

Companies Large And Small, All Looking For New Models

The Columbia program is in its third year, and this time around there are executives from media giants such as The Associated Press and The New York Times, as well as from smaller publications such as the Dallas-based Spanish-language publication Al Dia, the Jewish Daily Forward, and the Connecticut Post. Editors have even flown in from Brussels, London and New Brunswick, Canada. (An NPR News executive participated in the program last year.) They are all seeking help in developing targeted strategies for change.

A few months ago, the Christian Science Monitor became the first nationally distributed newspaper to scrap its daily edition in favor of its Web site. It now publishes a weekly magazine filled with longer-form reporting and analysis. That was considered a radical step for the esteemed but wilting publication — and one it worked out right in front of its peers.

"Las Vegas Rules" obtain at the Columbia program. That means what's said at the J School stays there — and participants say that gives them the ease of mind to share details about their own shops and offer heartfelt advice to others. I was allowed to observe with the understanding that I would get permission before revealing any specifics.

Ray Pearce, vice president for circulation at The New York Times, joined to get his peers' input as he develops a strategy for distributing the Times on electronic readers, such as Amazon.com's Kindle and its competitors.

"A lot of the goals were sort of lofty statements, and sounded wonderful," Pearce said. "What Doug and his team do, is they force you to focus. They say, 'Okay, that's great, but what are you trying to deliver?'"

With help from Smith and his peers in the seminar, Pearce is refining his strategy to study the question of how people may migrate among platforms as they mature — print, Web, mobile and e-reader. That last platform is important because people seem to expect to pay for content on them.

Out With The Private Chefs, In With The One-Man Bands

ABC News sent a top digital-news executive to the program to help find a way to augment foreign coverage that had been sapped by years of budget cuts. ABC News President David Westin said he has been forced to cut costs every year since taking over the news division — but he said he didn't want that to prevent careful investments in coverage.

"Ultimately, we want to put on good stories wherever they're from — the most interesting, the most important stories we can find," Westin said. "But we have to find them. And I was worried that the cost of the major bureaus was getting in the way of our finding those good stories."

The standard for gold-plated overseas bureaus, Westin said with a laugh, was set by Paris bureau chief (and President John F. Kennedy's onetime press secretary) Pierre Salinger. The bureau had its own wine cellar and full-time chef.

Now you see a cadre of younger, less well-known reporters armed with light digital cameras. They file stories and raw footage for the network's newscasts, Webcasts, podcasts and radio affiliates from eight spots around the world where the network would otherwise have no presence, such as Jakarta and Rio de Janiero.

In June, the network similarly outfitted several junior reporters in new assignments around the U.S.

New-media guru Jeff Jarvis admires the innovation but he said that kind of change may not be radical enough.

"If all we're doing is incrementally fixing problems in the current, old models, that's futile and fatal," Jarvis said.

Jarvis heads the interactive news program at the City University of New York's Graduate School of Journalism — a few miles south of Columbia in Midtown Manhattan.

Jarvis praised the Monitor's decision to kill its daily edition, for instance, but asked why the Boston Globe — another participant in the Columbia program — didn't also consider stopping the presses.

"Saving a little more money or making a few more pennies is not going to bring news into its next generation," Jarvis said. "We have to reinvent journalism — and the news business — for a new, profitable future."

But Columbia's Doug Smith said it's unrealistic to think of changing an entire industry.

"It's terrific when there are panels and forums and opinion pieces and things that throw great ideas into the mix," Smith said. "My experience is that it takes more than ideas to create a sustainable future. You have to implement those ideas."

ABC's David Westin suggests you think this way about the news business during tough economic times: It's much more like playing golf than like playing tennis. You're competing, he says, against the course.