Accessibility links
Earth Science From The Sky: The Next Generation NASA's new program prepares young Earth scientists to tackle tough environmental issues. In an airplane laboratory, students study everything from the growth of unusual algae blooms to the methane from a dairy cow's burp. 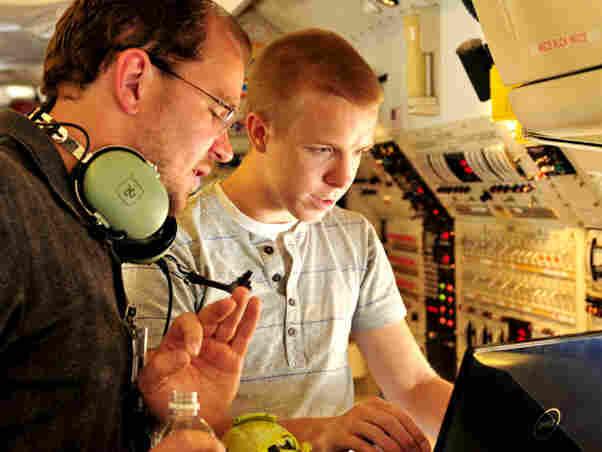 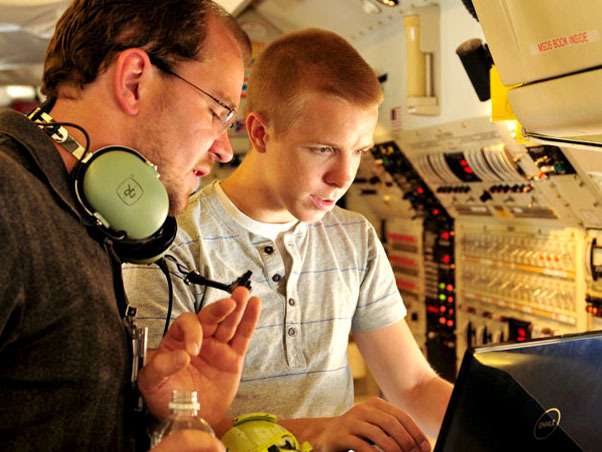 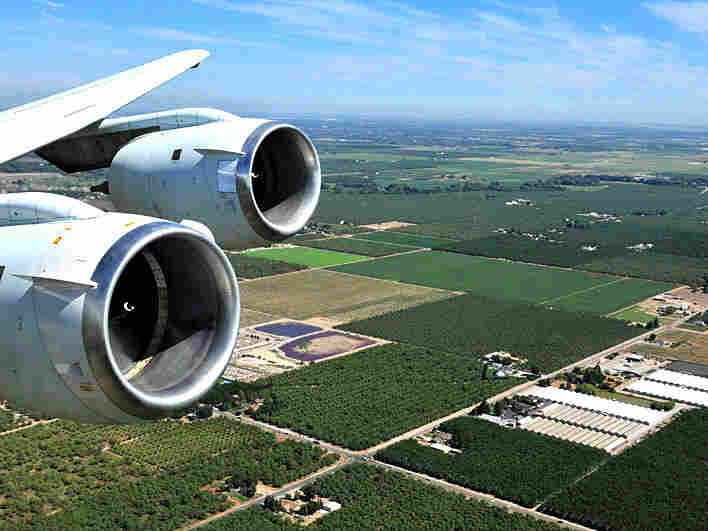 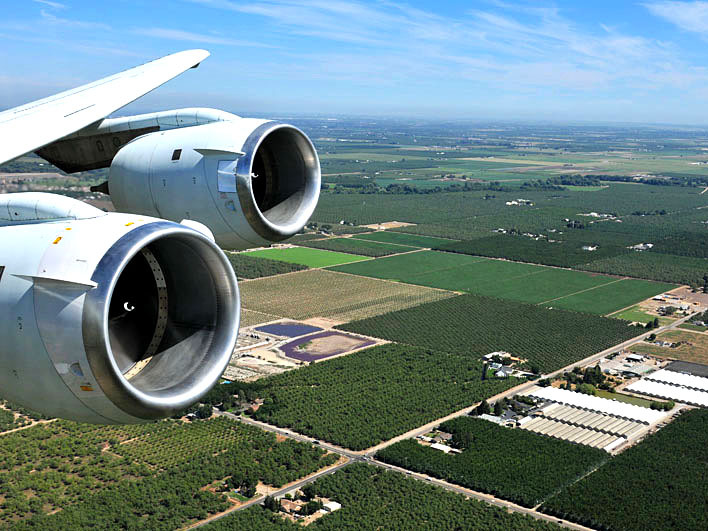 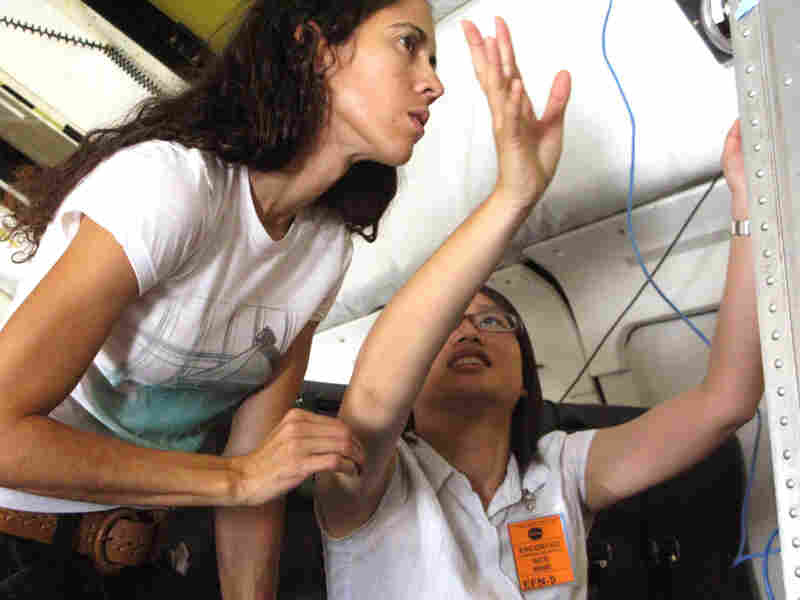 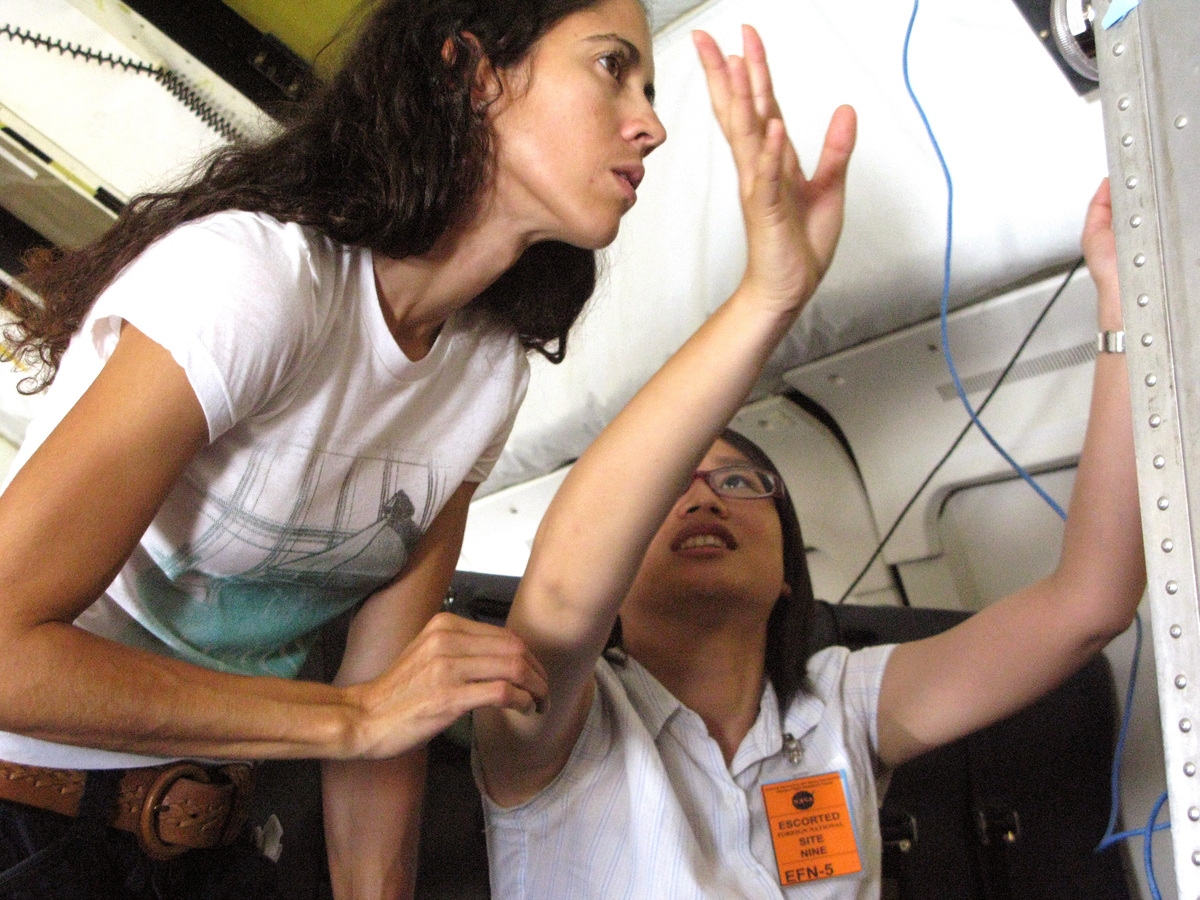 NASA is taking to the skies to encourage a new generation of scientists to study the earth.

The agency is hoping its new Student Airborne Research Program (SARP), a six-week session that includes research aboard a DC-8 flying laboratory, will get young people excited about solving problems like warming oceans, rising carbon dioxide levels and new pollutants in the air.

In recent years, American students haven't exactly been flocking to the field.

But if a recent pair of flights in California is any indication, SARP could help turn that around.

Just minutes after the DC-8 takes off on its second SARP flight from NASA's Dryden Aircraft Operations Facility in Palmdale, Calif., more than a dozen students are hard at work on three different experiments to be conducted in what is scheduled to be a six-hour flight.

As the plane flies low over the inland valleys of central California, Kamil Armaiz-Nolla, 29, and Daniel Tkacik, 23, work with several other students on an air-sampling experiment. A senior scientist from the University of California, Irvine, oversees their work, but doesn't interfere.

Every minute or so, Armaiz-Nolla twists open a valve that sends a sample of air from outside the plane into a stainless steel canister the size of an overgrown cocktail shaker.

The experiment will measure gases from dairy farms a thousand feet below. Cows belch up a lot of methane. And the process used to prepare their feed can raise levels of ozone, another greenhouse gas.

"To be up in a plane doing this, it's amazing," says Armaiz-Nolla, who, like most of the students, is dressed in jeans and a T-shirt.

Armaiz-Nolla has a background in chemistry, and she's about to finish a master's in environmental management at the Metropolitan University in Puerto Rico.

"Right now I am applying for a Ph.D. in oceanography," she says, "so I can apply what I study but I also can experience new things, especially the ocean, which is my passion."

Tkacik grew up in Georgia, and has a buzz cut that could be interpreted as either edgy or just aerospace engineer.

Tkacik's resume already includes accomplishments like studying carbon in the salt marshes of Skidaway Island. This fall, Tkacik will start a Ph.D. in civil and environmental engineering at Carnegie Mellon University.

He says he's been intrigued by the Earth's atmosphere since he was a kid.

"My family would be down in the basement during a tornado warning and I would be running around upstairs trying to look out the window," he says.

Tkacik and Armaiz-Nolla are exactly the kind of people NASA hopes to attract to studying our planet. They are highly motivated. They are fascinated by the Earth, and troubled by its environmental problems.

That kind of background has prepared the 29 students in the NASA program to do real scientific experiments during the session, says George Seielstad, the director of the Northern Great Plains Center for People and the Environment at the University of North Dakota, who worked with NASA to set up the program.

"This isn't a little practice lab session where you get to see how things would be done someday if you became a scientist," Seielstad says. "We're going to come out with results, and the results all impact society."

In addition to gases from dairy farms, the students are looking at water consumption by cotton and almond plants. That's a big deal in central California, where those crops have been hurt by years of drought.

And the students are using an image sensor to study unusual algae growth in Monterey Bay. So-called algal blooms can kill fish and make shellfish poisonous. The blooms are more common in waters contaminated by sewage and agricultural fertilizers.

"In every case it's beautiful science," Seielstad says. "But this will help people if we come up with some solutions."

Seielstad says those solutions are most likely to come from a new generation of Earth scientists.

"My generation has done the best science it could and I think we've learned a lot about the Earth," he says. "But you're always looking for new ideas."

And new ideas, he says, often come from people who don't necessarily look like the older generation of Earth scientists, or sound like them.

Indeed, the students on the plane include many women, several native Spanish speakers, and a wide range of scientific backgrounds.

A couple of hours into the flight, the students have collected most of the critical air samples and the DC-8 is about to turn toward Monterey Bay for the algae experiment.

Throughout the flight, there's been a lot of concern about a fog bank hovering over the bay. Fog makes it almost impossible to detect algae blooms. But right now forecasters are predicting clear skies.

Then the pilot hears a couple of small clunks and the students get some bad news.

"We hit a bird," Tkacik explains after the information is relayed from the cockpit. Several students crowd around a window where they can see a small hole in the left wing. The plane will have to head back for Palmdale.

You can tell you're on a plane full of working scientists when the biggest concern about a hole in the plane is whether it will screw up someone's experiment.

"It sucks," Tkacik says. "We would have got so much data. But now we got nothing."

By the time we're back on the ground, though, everyone is sounding more optimistic. During the post-flight briefing in one corner of a vast hangar, the students give the flight crew a round of applause.

Next, the students will go back to the University of California, Irvine, to analyze their data.

One team will quantify the methanol and ethanol and ethane coming from dairy farms. This will help show the farms' contribution to global warming — and perhaps whether the cows should get a low-emissions diet.

Another team will figure out which parts of the cotton fields and almond orchards need more irrigation, and which could do with a bit less.

And Tkacik and Armaiz-Nolla will work to salvage the algae experiment. They say they have some data from a flight over Monterey Bay two days earlier. And they're excited because it's showing hints of an algae bloom in one corner of the bay.