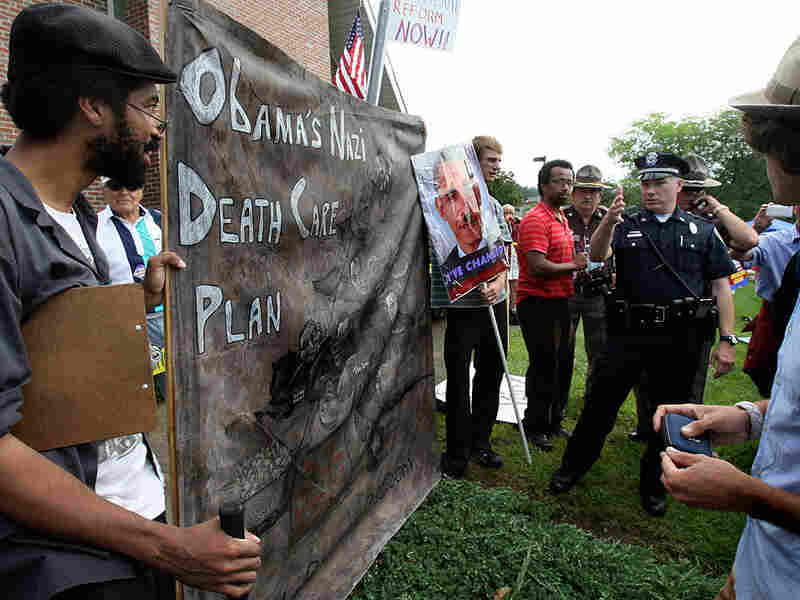 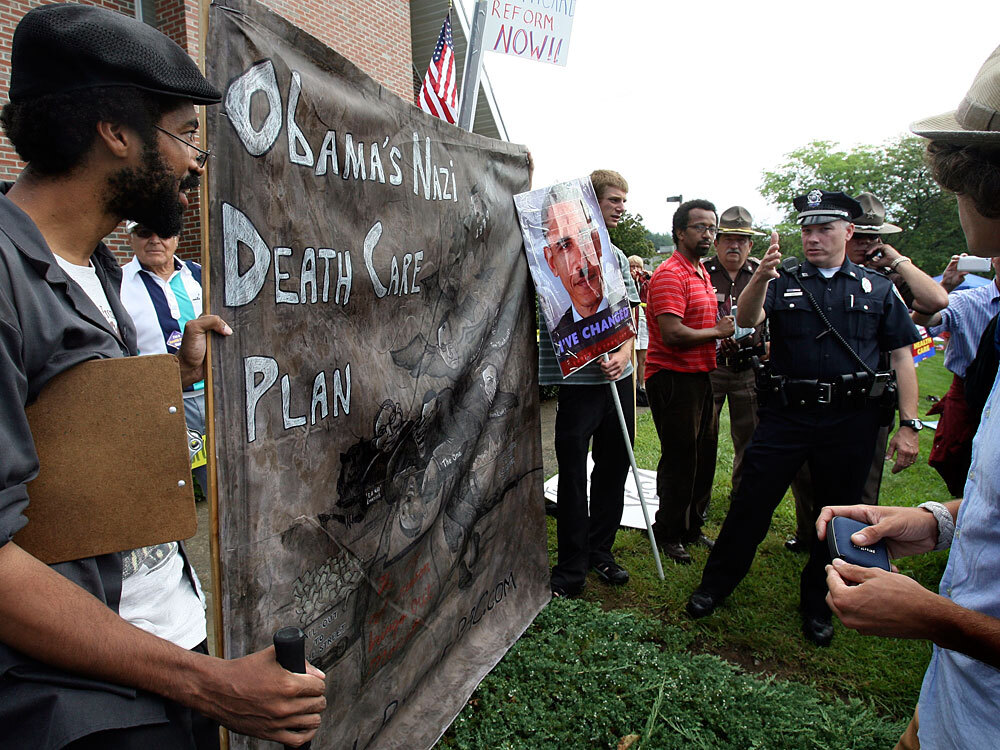 Police work to keep control of protesters at Portsmouth High School in in Portsmouth, N.H., Tuesday, Aug. 11, 2009, where President Obama spoke about his health care plan.

The story has spread so fast even President Obama got asked about it at one of his town hall meetings. But no, the health care overhaul bill now working its way through Congress would not require seniors to learn how to die prematurely.

It's not, however, because people aren't saying it. The most notable spokeswoman for the cause is Elizabeth McCaughey, the former lieutenant governor of New York. McCaughey's last brush with major public prominence came during the debate over then-President Bill Clinton's health plan, when she wrote a highly controversial critique of the proposal published in The New Republic arguing the bill would have bound everyone inside the new system.

This time McCaughey has been making the talk radio rounds arguing that the latest version of a health overhaul has the government sponsoring suicide education.

"One of the most shocking things I found in this bill, and there were many, is on Page 425, where the Congress would make it mandatory — absolutely require — that every five years, people in Medicare have a required counseling session that will tell them how to end their life sooner, how to decline nutrition, how to decline being hydrated, how to go into hospice care," McCaughey said on former Sen. Fred Thompson's radio show July 16.

That claim won her a "pants on fire" rating for its lack of truth from the nonpartisan Politifact.com Web site run by the St. Petersburg Times. But it has nonetheless spread like wildfire, being repeated not just on blogs and radio shows but by Republican members of Congress as well. Said a joint statement from House Minority leader John Boehner (R-OH) and Republican Policy Committee Chairman Thaddeus McCotter (R-MI), "this provision may start us down a treacherous path toward government-encouraged euthanasia if enacted into law."

The claims have been highly upsetting to groups like the National Hospice and Palliative Care Organization, which strongly support what the bill really does — pay health care providers to talk to Medicare patients about creating so-called advance directives, or ways to express their health care desires in writing before they become incapacitated.

In fact, says Kathy Brandt, vice president of professional leadership, consumer and caregiver services, advance directives need not be about cutting off care at all. "If you want everything to be possibly done; all medical treatment to be done for you until your last breath, that's what advance directives can do for you," Brandt says. "I think most people who are healthy adults, not facing a terminal or life-limiting conditions, would want treatment, and nothing that's in any of the health care reform bills that I've heard or seen does anything that would prohibit that."

Blendon says it's no accident that opponents of the health overhaul chose to single out a provision aimed at seniors to make their case, because if seniors think they have something to lose from the current health care overhaul, "[they] are really going to be very active opponents of this, because that's not what they signed up for," he says.

And seniors, unlike many younger people, are very likely paying more attention to the health care debate.

"The seniors are really going to read and listen to everything and be concerned if they think as a result of the bill their current circumstances are going to deteriorate," Blendon says.