Accessibility links
Swine Flu Vaccine Trials Begin Testing Volunteers In effort to prepare for a major outbreak this fall, the government began testing an H1N1 influenza vaccine Monday. Eight centers across the nation are moving quickly to test the vaccine's safety and determine the necessary dosage to build antibodies. 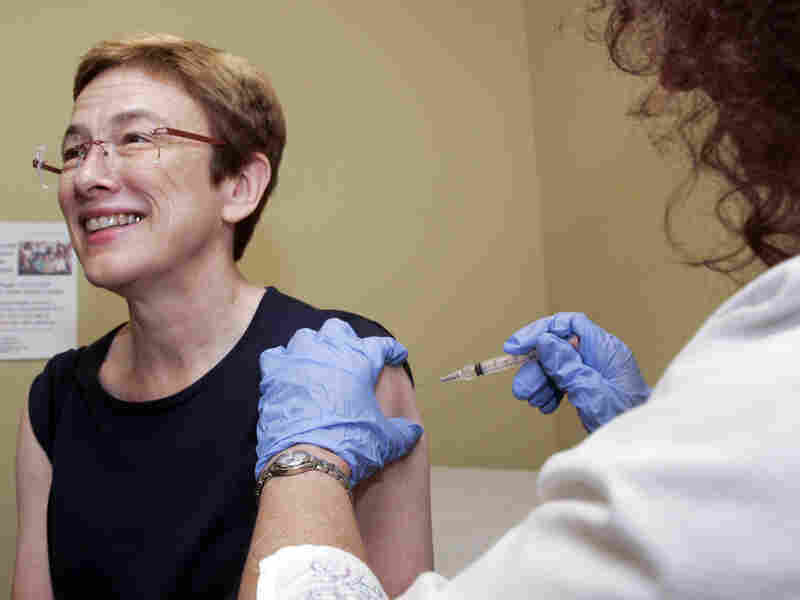 At Emory University in Atlanta, Linda Potter receives a shot of H1N1 flu vaccine during one of several clinical trials of the new vaccine. John Amis/AP hide caption 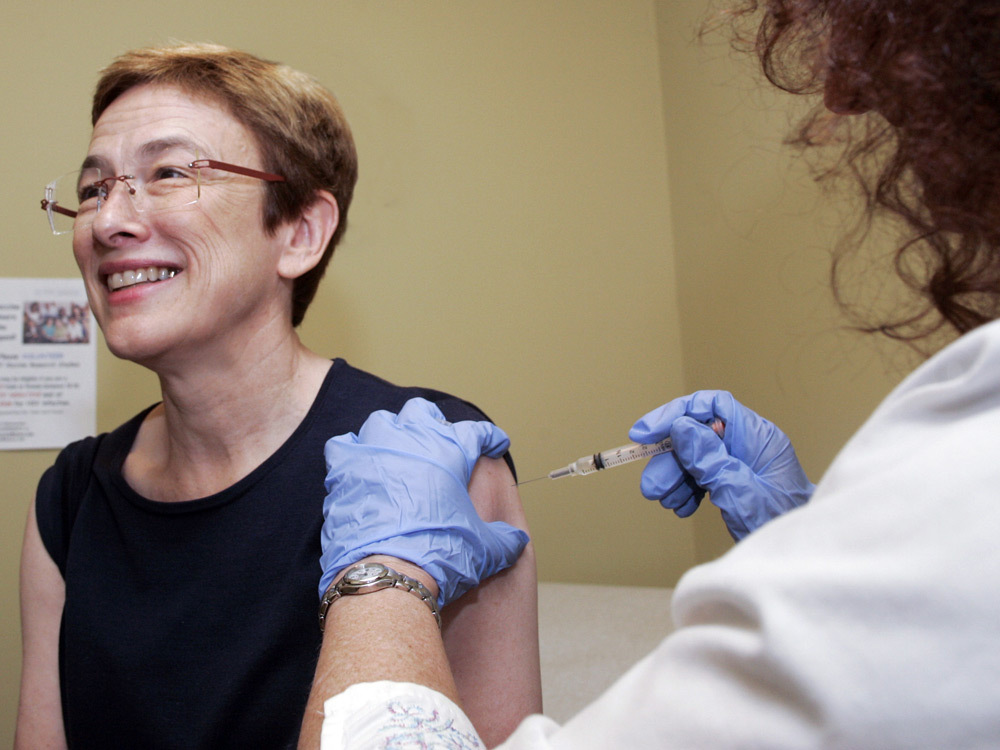 At Emory University in Atlanta, Linda Potter receives a shot of H1N1 flu vaccine during one of several clinical trials of the new vaccine.

As a part of preparing for a major outbreak of the H1N1 swine flu this fall and winter, the government began testing H1N1 influenza vaccine Monday.

The first clinical trials are enrolling up to 2,400 people and will test H1N1 vaccine made by two drug companies using the so-called seed stock of the H1N1 virus provided by the federal government. The trials are designed to determine if the vaccine is safe in healthy people of various ages and gauge how many doses are needed to protect against the swine flu.

The testing is taking place at multiple Vaccine and Treatment Evaluation Units across the country — the longstanding vaccine clinical trials infrastructure run by National Institute of Allergy and Infectious Disease. The first trials are testing healthy adult volunteers between the ages of 18 and 65.

If the first eight days of adult testing don't raise any safety concerns, researchers will begin testing the vaccine in healthy children ages 6 months to 18 years.

Generally, researchers would wait longer before moving to test a vaccine in children, says Dr. Ina Stephens, a pediatric infectious disease specialist at the University of Maryland Center For Vaccine Development.

"For a lot of reasons this is not a typical vaccine trial," says Stephens, whose center is one of the locations of the clinical trials. "Because of the urgency for getting this vaccine approved for public use, we need to hurry ... we're looking mostly for safety data."

So researchers may not have data on how well the vaccine causes the body to create antibodies for several weeks. But because the vaccine is formulated and manufactured just like the seasonal flu vaccine, they're hoping for and betting on positive results, says Stephens. And, because the vaccine only uses part of the virus — a protein extracted from the virus grown in eggs — people can't get the disease from the vaccine.

Volunteers receive the vaccine in a controlled medical setting, and are monitored by staff for a half hour after receiving the vaccine. The participants keep an intensive safety diary for the next eight days and must report any serious adverse reactions immediately.

In addition to follow-up phone calls, eight days after the vaccine is administered, researchers will analyze participants' blood samples for H1N1 flu antibodies. The vaccination process requires a second dose three weeks after the initial vaccine injection and additional blood work will be also be conducted at this point.

"We expect it to 'take' like the regular flu vaccine," says Stephens. "This vaccine is really prepared and formulated like every single influenza vaccine ... it really is just a variant on seasonal flu vaccine and we don't expect any major reactions different from other vaccine given to millions every year."

The initial trials are testing vaccines made by Sanofi Pasteur of Swiftwater, Pa., and CSL Limited of Melbourne, Australia. A seasonal flu vaccine made by Sanofi Pasteur is currently licensed in the United States for use in children, which means that a candidate H1N1 influenza vaccine made by that company is allowed to be tested in U.S. children. The trials test two different dosages of vaccine — 15 micrograms and 30 micrograms — and the trial is double-blind, meaning neither the researchers nor the participants know which dose is being used. The University of Maryland Center For Vaccine Development will begin testing healthy seniors ages 65 and older on Wednesday.

Health officials say a vaccine to fight the H1N1 swine flu virus should be ready for distribution in mid-October. Some have expressed concern about getting enough of the population vaccinated soon enough, particularly if two doses are required several weeks apart.