Accessibility links
Thousands Volunteer For Swine Flu Vaccine Test The federal government has started testing vaccines against the swine flu. About 2,800 volunteers at eight sites across the country will be rolling up their sleeves in the next week to receive experimental flu shots. U.S. Health officials are preparing for a possible fall outbreak.

The federal government has started testing vaccines against the swine flu. About 2,800 volunteers at eight sites across the country will be rolling up their sleeves in the next week to receive experimental flu shots. U.S. Health officials are preparing for a possible fall outbreak.

This is MORNING EDITION from NPR News. I'm Linda Wertheimer.

INSKEEP: So how has swine flu spent its summer vacation?

SILBERNER: Well, it's gone to the southern hemisphere, especially South Africa, New Zealand, Australia, Chile, Argentina and Brazil. It's going strong there. In the U.S. it's gone to camp. It's been at a number of summer camps, and it's been in a few other places, but mostly the summer camps.

INSKEEP: Well, what happens when kids start going back to school, which is happening any day now?

SILBERNER: Right. And everybody's best guess is that it's going to come back to school with kids, but nobody really knows. The theory, of course, is that viruses spread better when people are close to one another and you get that in school. Flu viruses spread better in cooler, dryer air. You get that as the fall comes on. But I've got to tell you, if you talk to two virologists, you'll hear three times that the flu is unpredictable.

INSKEEP: Well, how soon will we see a vaccine from those 2,800 people rolling up their sleeves and getting tested here?

SILBERNER: And years ago the government convinced vaccine manufacturers they really needed to step up their production capabilities. And that's when people were worried about - remember avian flu or bird flu?

SILBERNER: That concern led to an incredibly build up of what manufacturers can do. And we're taking advantage of that now, because there probably will be enough around.

INSKEEP: Do they still make the vaccine by injecting you with basically a weaker version of the same virus? Is that what this vaccine is?

SILBERNER: Well, no. the way they make most seasonal flu vaccines is they take the new virus - because every year, seasonal flu switches a little and they pick new virus strains to work with. They combine them with another vaccine. It's actually pretty cool and a little complicated. This combination vaccine produces some of the proteins of the virus that you're worried about. And then they kill the virus and they take off those proteins and that becomes the vaccine.

INSKEEP: Is it safe?

SILBERNER: Well, it looks like it. The seasonal flu vaccine, you know, we're talking billions of doses of these various flus over the years - these various vaccines - and they've all been safe. So the thought is there's no reason to think that this one will be any different.

INSKEEP: Although manufacturing this, if I'm not mistaken, is a slow process. Is there going to be vaccine for 300 million Americans or a desire to get that many Americans to take the vaccine?

SILBERNER: Who's going to get the vaccine? Well, there's some surprises there, because the government's come up with its list. And on the list are pregnant women. Not usually considered for, you know, for new things. But pregnant women are being disproportionately affected by this virus.

SILBERNER: There's not a concern for older people, which is unusual, because that's - seasonal flu usually gets older people first. But in this case it looks like they have their own immunity from having seen a similar virus back before 1957.

INSKEEP: Joanne, thanks very much. 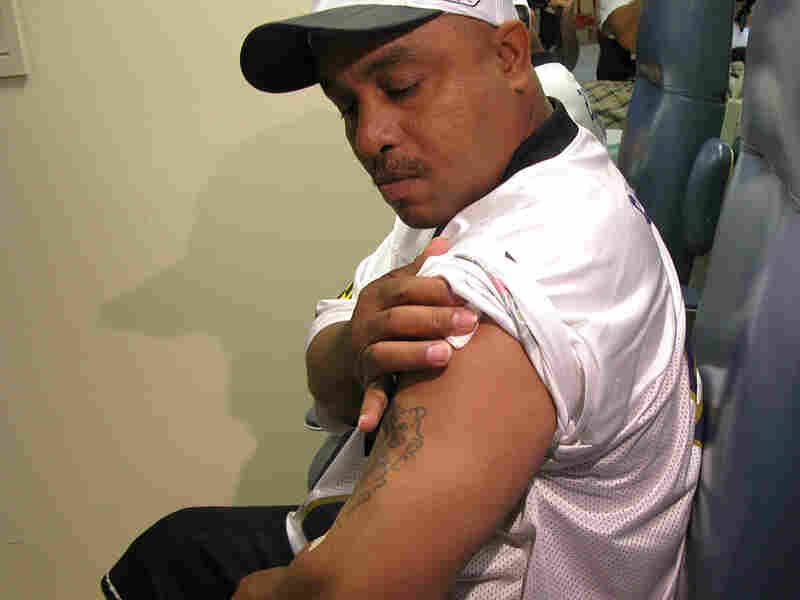 Lorenzo Thornton volunteered to take part in early trials of the new H1N1 vaccine. He received the vaccine at the University of Maryland Center for Vaccine Development. Joanne Silberner/NPR hide caption 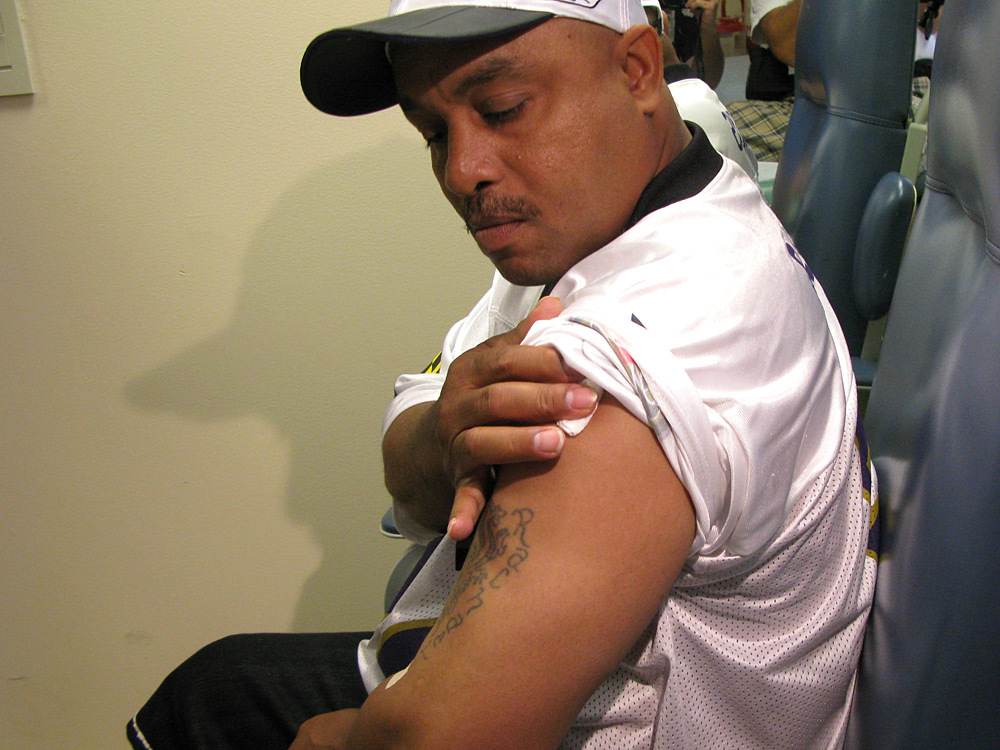 Lorenzo Thornton volunteered to take part in early trials of the new H1N1 vaccine. He received the vaccine at the University of Maryland Center for Vaccine Development.

Researchers have begun testing a vaccine engineered to fight the new H1N1 swine flu that first appeared in the spring. The tests are being done quickly, in a race to have something available before a possible fall outbreak.

At the University of Maryland in Baltimore and seven other sites around the country, volunteers began receiving a new vaccine against H1N1 swine flu on Monday. They are the first volunteers in a government trial that will eventually include 2,800 people.

Landscaper Lorenzo Thornton, 48, is one of the volunteers. He says he is not the least bit worried about being in a vaccine trial. "I've got a pretty strong immune system," he says. Though Thornton will get paid for participating, he says he's not in it for the money.

"Whatever they can find out from me, if it gives me any kind of reaction, maybe it could help someone else," he says.

Thornton has to first sit through a 40-minute orientation to learn about the risks he might be taking. Dr. Wilbur Chen of the University of Maryland Center for Vaccine Development gives the talk. And last Friday, as soon as the vaccine arrived, Chen got a shot himself.

Chen tells the volunteers that the trials are moving fast because the virus itself is moving fast.

"It only took about a month for us to have it spread from Mexico to our Southern states. And then from that, only 10 days later did we start confirming these cases in California, Kansas, New York, Ohio, Texas," says Chen. "And at that time, that's when our nation's health and human services declared a public health emergency."

Chen also told the volunteers that they shouldn't expect to get the flu.

"The vaccine, you should know, is a killed virus, so you're not going to be able to get the actual flu from it, although you may get flu-like symptoms," Chen says.

Volunteers will be checked closely for any side effects. They'll also be monitored for Guillain-Barre syndrome, which was reported in people who received a swine flu vaccine 33 years ago. It's a rare syndrome usually triggered by a viral infection, and no one knows for sure if the vaccine is also a trigger.

Dr. Karen Kotloff is heading the University of Maryland trials, and her team is racing to test the vaccine's safety and effectiveness before a potential major outbreak of H1N1 in the fall. "Coming I think in September, there's going to be an increase, and I think it will become much steeper come November or December," Kotloff says.

If the vaccine turns out to be safe, government officials say they'll have it ready for distribution in mid-October. Kotloff is confident about the vaccine's safety because of the long safety record of seasonal flu vaccines.

"We have no scientific basis for thinking that this vaccine will behave any differently," says Kotloff. The vaccine is prepared and formulated like the seasonal influenza vaccine that many people take each year.

She says that at the University of Maryland, they'll give about 400 shots in the next week.

In a matter of weeks, researchers will have more data about how many doses of the vaccine are needed to be effective. If people need two shots of the new H1N1 vaccine, this could prove a challenge if there's not much available this fall.

In our swine flu update, NPR reporter Joanne Silberner said that previous seasonal flu vaccines have all been safe. As she and other NPR reporters have noted in other stories, there are questions about the safety of a flu vaccine used in 1976. After an unexpected outbreak of swine flu that year, a new vaccine was developed and used in 40 million people. Several hundred cases of a neurological condition called Guillain-Barre syndrome developed among those vaccinated, including 25 deaths. Researchers who studied the incident still are not sure whether it was the vaccine that caused the syndrome or if some viral infection or other cause was responsible for those cases of GB.