Accessibility links
ISO Black Women Looking For Interracial Love Roughly 40 percent of black women in the U.S. have never married. "Free Your Mind: The Black Girl's Guide to Interracial Dating" is a seminar that encourages black women to expand their dating world by crossing the color line. 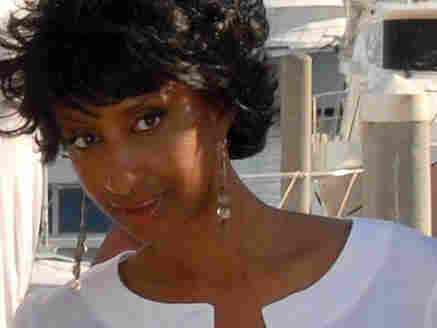 Fleace Weaver, an L.A. socialite and the organizer of "Free Your Mind: The Black Girls Guide to Interracial Dating." Fleace Weaver hide caption

For many black women in America, finding love has become a serious issue.

Census data show that roughly 40 percent of black adult women in the U.S. have never been married. That's nearly twice the percentage of white women.

One entrepreneur in Los Angeles is fighting the odds. Her mission: move black women from no man's land to a diverse dating world.

More than 100 black women pack a small Italian restaurant near West Los Angeles. It's standing-room only. They're not there for the food; they're there for a seminar called "Free Your Mind: The Black Girl's Guide to Interracial Dating."

There's no reason for us to believe we have to be alone. The only thing that's keeping us from finding someone is that we limit ourselves.

Fleace Weaver, an L.A. socialite and the organizer of the night's event, got the idea after noticing that many of her black friends had it all — a career, house, independence — but no man.

Weaver is black. She dates men of all colors — black, white, brown — and wants more black women to do the same. "I am an international lover. All right; I am an equal opportunity lover," Weaver says. "That means I love who is good to me. I don't want anybody just because they're a certain color."

Some black professional women say it's harder to find a black man at their same education and income level. You can see the trend on college campuses. According to the Department of Education, in the fall of 2007, 64 percent of black students enrolled in college were women.

But Weaver argues that Mr. Right doesn't have to be Mr. Black. "There's no reason for us to believe we have to be alone. The only thing that's keeping us from finding someone is that we limit ourselves," Weaver says.

Interracial dating is a sensitive issue in the black community. Blacks have a brutal history with race relations; some blacks see dating outside the race as betraying the culture.

Still, more black men are thinking outside the box. According to research from Stanford University, black men are nearly three times more likely than black women to marry interracially.

A dozen nonblack men — all of whom date or are married to black women — speak on a panel. They answer questions about crossing the color line. For instance: How do you know if a nonblack guy likes black women?

"If a white guy, Asian guy or Mexican guy — whatever race, irrelevant — likes you and he has skills, then he's going to ask you out, just like a black man would. If you're in a social setting and a man comes up to you, he's interested. That's it," says panelist Francisco Dao.

The panel also touches on that other sensitive topic for black women: hair. Are other men OK with the various textures and styles of black women's hair? The entire panel agrees: short, long, straight or kinky, it doesn't matter.

Christopher Rawley is white and is married to a black woman. After his wife burned herself with a curling iron, he told her: "Don't do this because of what you think I want you to be like. Be you. And you're beautiful natural. You're beautiful however you want to feel," Rawley says.

Weaver also invited a few black men to speak to show that they support this cause — that the program is not to bash them. The group includes Ryeal Simms, a relationship coach who encourages his black female clients to expand their options — but to do it for the right reasons. "Because if you're going in it thinking that if he's not African-American, he's going to treat me better, and I'm going to be really happy regardless, we're all still men," Simms says.

Regardless of whom the women choose to date, Weaver hopes they leave the seminar with at least one thought.

"Dating is just dating. Men are just men. You know, it's all the same at the end of the day," Weaver says.

Weaver is taking the Free Your Mind seminar to Chicago, Atlanta and New York this fall.