Accessibility links
Pot Collective Sprouts In Retirement Community A group of senior citizens in a luxury retirement community in Orange County are discovering the benefits of medical marijuana, which was legalized in California more than a dozen years ago. Now they're also figuring out how to procure it for the rest of their community.

It's been more than a dozen years since California became the first state in the nation to legalize marijuana for medical use. In some California cities, cannabis dispensaries are springing up like, well, weeds.

But in more conservative communities, patients have a harder time finding legal marijuana. That difficulty has led a group of senior citizens in Orange County to start setting up a pot collective in their luxury retirement community.

"The water's magnificent," Bouer said. "I'm me in the water. This is what keeps me alive."

Bouer, 73, is one of the younger members of the Aquadettes, a synchronized swimming group in Laguna Woods, Calif. A retired nurse, she moved to Leisure World — also known as Laguna Woods Village — 16 years ago. For Bouer, water is more than fun — it means relief from multiple sclerosis.

In the water, she doesn't shake, or lose her balance, need a walker or worry about a new symptom that began last year.

"Suddenly, I'd have a wave of nausea," she said. "And from that wave, I'd vomit, and I'd vomit from the tip of my toes all the way up. And I had no clue as to what was going on."

In April, a physician neighbor encouraged Bouer to go to a meeting about medical marijuana. She says it was a stretch for her — a former psychiatric nurse whose generation considered cannabis little more than a gateway to harder drugs. But she went, and then she experimented.

"I was so preoccupied: 'Now what's happened?'" she remembers thinking. "Well, what happened is that nothing happened, except that I wasn't nauseated."

Dr. Bill Schwied, 88, is the neighbor who encouraged Bouer to find out about cannabis.

"The only risk involved is the legal risk, which is very frightening to many doctors and patients," Schwied said.

There have not been enough studies conducted to evaluate the full medical risks of marijuana, especially on the elderly. There is risk of developing dependence on the drug. Both the American Medical Association and the National Multiple Sclerosis Society say there is a need for more research in the field. Meanwhile, 13 states now approve the medical use of marijuana. But the federal government still classifies the plant as an illegal Schedule I controlled substance, with no accepted medical use — a category it shares with cocaine and heroin.

But Schwied sees that marijuana has obvious benefits.

"I don't think it cures everything, but it's one approach in medicine that the medical profession has kind of ignored," he says.

The retired doctor and nurse have become vocal advocates for elderly use of medical marijuana. Since the spring, they've appeared publicly at community meetings.

Speaking at a recent forum, Margo described her own experience.

"For the first time, the nausea dissipated," she said. "I sat there and waited for it, and I felt relaxed and I thought, 'Well, it'll probably return during the night.' But guess what? I slept like a log." 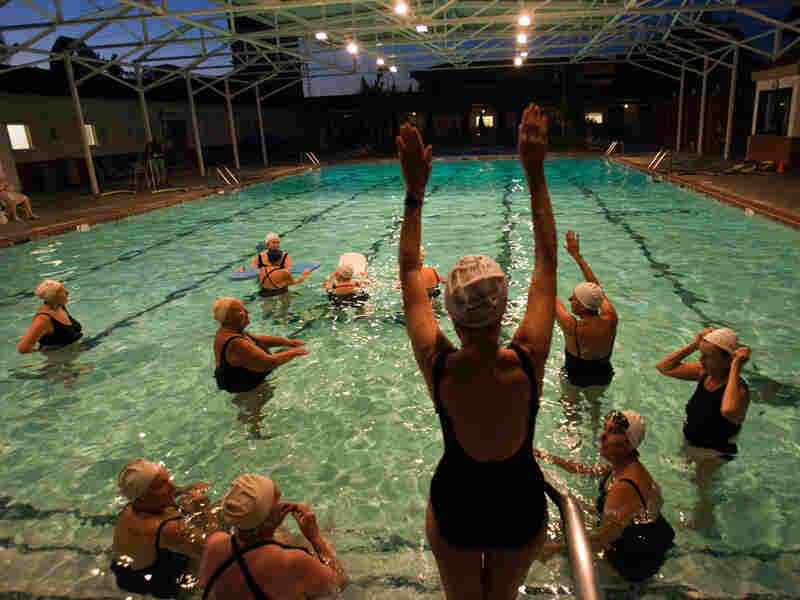 Despite having to rely on a cane and a walker to help her get around due to multiple sclerosis, Margo Bouer takes part in synchronized swimming at the Laguna Woods Village clubhouse pool. Todd Bigelow for NPR hide caption 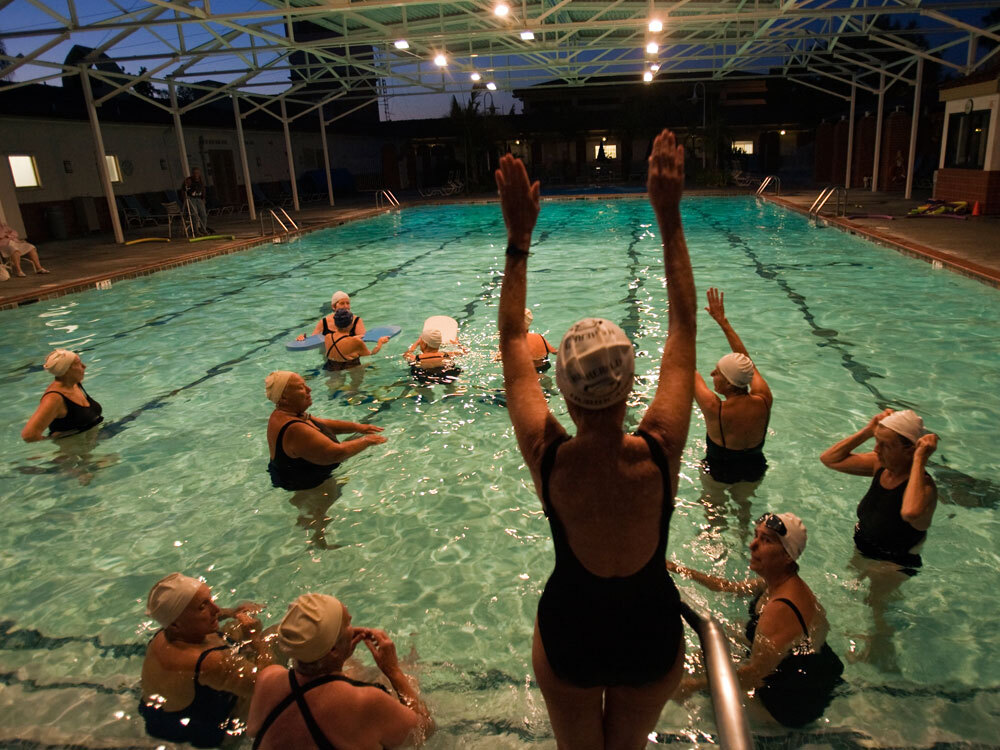 Despite having to rely on a cane and a walker to help her get around due to multiple sclerosis, Margo Bouer takes part in synchronized swimming at the Laguna Woods Village clubhouse pool.

More than 200 seniors turned out for the panel discussion on medical marijuana at the retirement community this past June. No one spoke against it.

These days, getting a doctor's recommendation for medial marijuana is easy. It's getting the cannabis that can be a problem for the seniors. Laguna Woods passed an ordinance allowing dispensaries a year ago, but so far, retail property owners have refused to lease to any marijuana businesses.

So the retirees are forming their own non-profit medical marijuana collective. A small group of them has been meeting to study their options under the law.

At a recent session, one man suggested that the group distribute not merely doses of medical marijuana, but the plants themselves.

"We could give them these little plants that they could put on their balcony that won't take much room at all," he said, "and they would be able to have medicine available in like 60 days."

The Question: How Legal Is Legal?

While some dispensaries charge $20 a gram or $600 an ounce, the seniors say they want their collective to charge only enough to cover their costs. The Orange County District Attorney's office wouldn't comment on the legality of marijuana collectives.

The Laguna Woods collective is getting legal advice. But even if they follow the letter of California's law — which permits doctor-recommended use of cannabis, and allows patients to legally buy it, or grow their own — the retirees are still taking a risk, according to Don Duncan, California director for Americans for Safe Access.

"The federal government typically doesn't target medical cannabis patients," Duncan said. "But if one or more of these patients want to join together into a collective or cooperative, there is a substantial legal risk in providing that service to the community."

Duncan said that although he sees the risk as being lower under the Obama administration, "until the federal law changes, there's always a chance that somebody could be arrested or indicted."

If that happens, Bouer is likely to have a lot of elderly supporters. Her group recently held a community meeting to announce that the collective is forming. More than 70 people turned out.