Accessibility links
Acid In The Oceans: A Growing Threat To Sea Life Carbon dioxide isn't just affecting our climate, it is also increasing the acidity of our seas. Scientists worry that corrosive conditions will harm marine life, and could change our oceans in ways they're just now starting to understand. 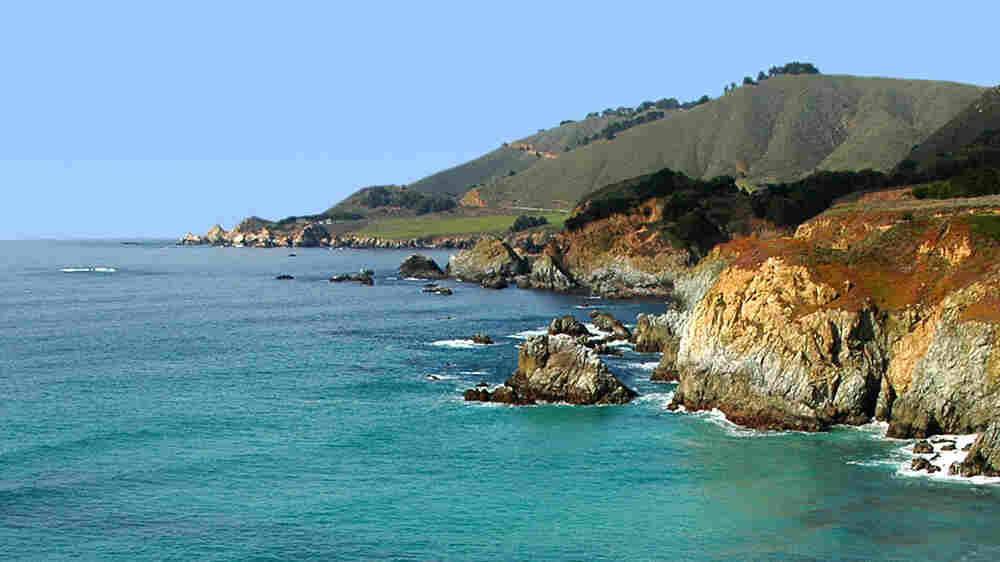 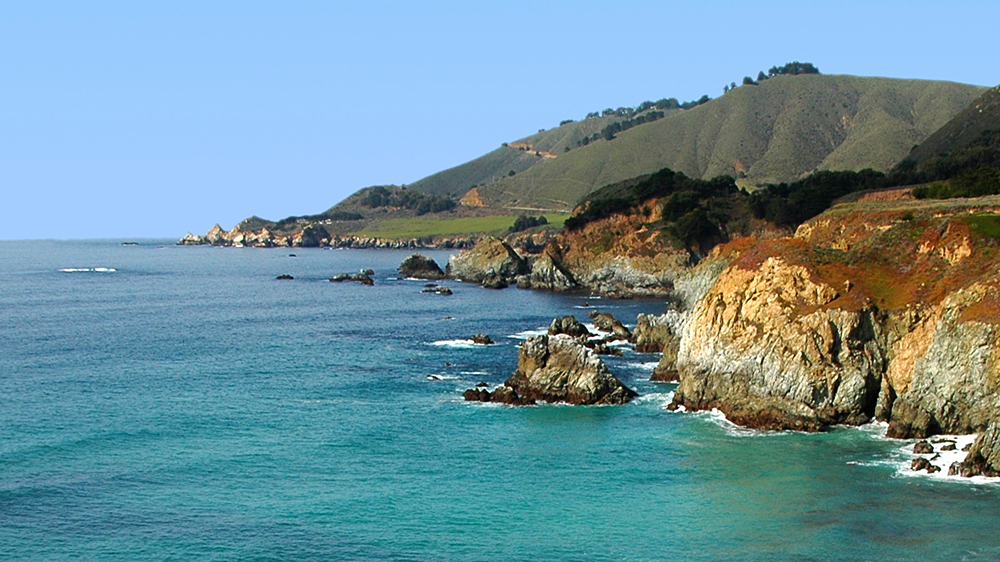 When we burn fossil fuels, we are not just putting carbon dioxide into the atmosphere. A lot of it goes into the sea. There, carbon dioxide turns into carbonic acid. And that turns ocean water corrosive, particularly to shellfish and corals.

Biologists are now coming to realize that rising acid levels in the ocean can affect many other forms of sea life as well.

Visit Moss Landing, Calif., in the spring and at first blush it seems marine life is flourishing. Sea lions, weighing in at 600 pounds or more, jostle for space and spar with one another as they try to cram themselves onto docks that groan under their weight.

Marine biologist Eric Pane looks on approvingly at what seems to be part of a Pacific success story. Up and down the coast, biologists see healthy populations of marine mammals, fish and other wildlife.

But as we cross the street and head into his laboratory at the Monterey Bay Aquarium Research Institute, Pane's outlook about the future of life in the sea takes a dark turn. His budding career as a marine biologist is framed by an ominous trend: civilization is venting carbon dioxide from tailpipes, smokestacks and chimneys at a prodigious rate.

"And at least a third of it so far, has actually ended up in our oceans," Pane says. "(That's) sort of good and bad news because it has prevented more CO2 from accumulating in the atmosphere but it comes at a price. More CO2 in the ocean leads to it being acidified."

Acidity is measured on the pH scale. Already, the oceans are a tenth of a unit more acidic. And by the end of the century, the pH is expected to change by half a unit. But don't be fooled by these modest-sounding numbers.

"So we say 'only' — 'only' half a unit. What's the big deal about that? Well, that's a tripling of acidity," Pane says. "That's a three-fold increase.

That's because the pH scale is logarithmic, so each unit increase actually represents a ten-fold increase in acidity.

Over the past half-dozen years, marine biologists studying ocean acidification have focused mostly on the animals they assume will be the most vulnerable, such as coral reefs and shellfish. If acid levels in the ocean get too high, their shells can literally dissolve.

Pane is part of a second wave of research on ocean acidification as biologists try to understand the consequences for all the life in the sea. 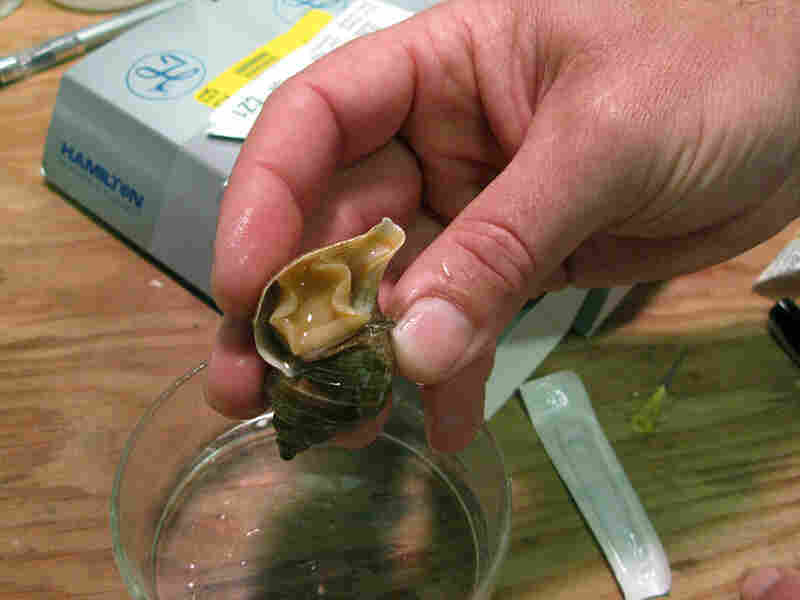 A researcher examines a neptunia snail that was collected in some of the deepest waters of Monterey Canyon. Richard Harris/NPR hide caption 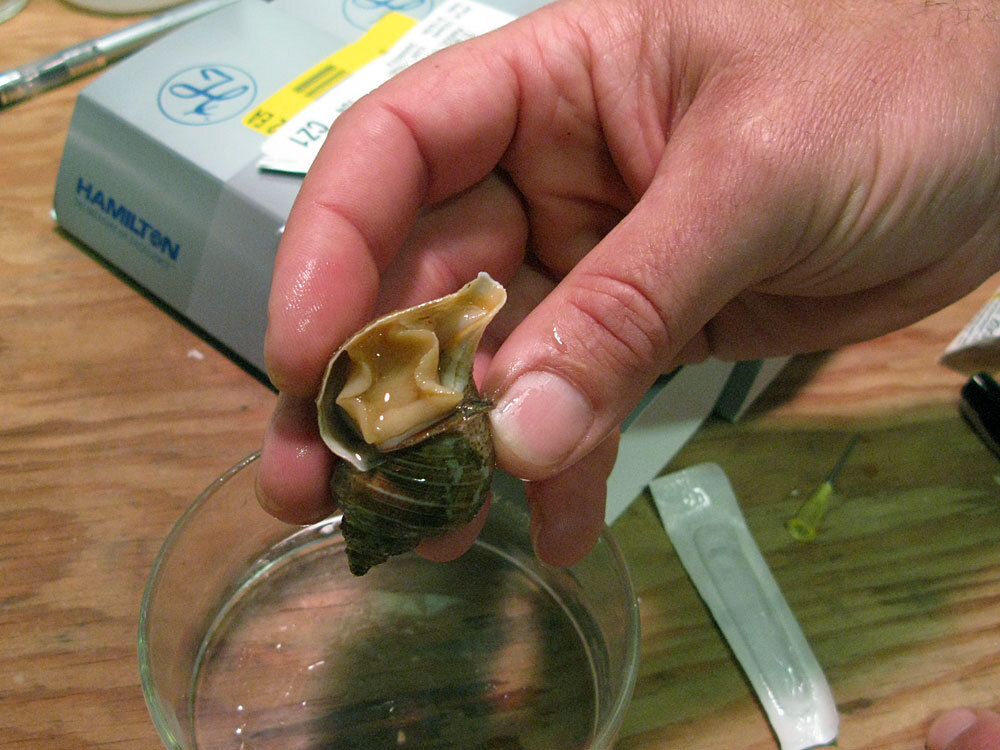 A researcher examines a neptunia snail that was collected in some of the deepest waters of Monterey Canyon.

"Right now we're scrambling and we're trying to get our feet beneath us," he says.

The simplest issue, he says, is to understand how organisms respond to acidification — as well as how the ecosystem responds.

"We're trying at this point to get as many animals as we can across a spectrum of invertebrates [and] vertebrates," he says. "All we can get to, basically so we can get them into the lab and expose them to these different scenarios of CO2."

Pane's lab is focusing on animals that live in relatively deep water. Many live nearby. There's an enormous underwater canyon just offshore, slicing through Monterey Bay.

"We've got gastropods, marine snails. We've had brachiopods," he says. "We've worked with decapod crabs, basic crustacea. We're hoping to get some smaller fish in, down in our seawater lab facility."

At a lab bench inside the facility, three-inch-long marine snails sit in a glass dish. They came from 700 meters offshore. The snails have holes drilled in the top of their shells to make it easier for researchers to draw frequent blood samples.

Each animal they want to study presents different challenges — whether it's getting a blood sample from a snail or figuring out how to keep deep sea fish alive in the lab. It's also not always so obvious what effects to look for.

A change in acid can actually impose a subtle "energy tax" on marine animals. They already use some energy pumping acid out of their cells to maintain a healthy pH. As the oceans get more acidic, Pane says, the animals will be forced to expend more energy to maintain that balance.

That means less energy for such things as growing and reproducing, Pane says.

It's too early to say, just yet, what this portends for life at sea — up to and including the fat and happy sea lions down on the dock.

"I think the least we can say is there's going to be profound changes to ocean ecosystems. From there, where we go and the judgments we make about that is an issue for further on."

Marine biology sounds to most people like an exciting career, but Pane says his work is actually a bit depressing. "Within a few years there's going to be change basically, and I'm not sure how it's going to work out."

There are just a few people in the world who have actually been thinking about ocean acidification for decades. And one of those is down the hall from Pane. Peter Brewer realized that something was amiss with the ocean's chemistry back in the 1960s, and he's seen the problem grow much, much worse.

"The quantity of carbon dioxide we've put in the ocean is now well over 500 billion tons," he says. "And you can't just transfer that much mass without making changes to the physical properties as well as the biological properties."

Brewer says the carbon dioxide has already altered ocean chemistry in such a way that it affects the way sound travels through the ocean. That effect will grow, as more and more carbon dioxide ends up in the sea.

"One assumes that whales, which communicate at these frequencies, will sense this effect," Brewer says. "Whether they will adapt their communication patterns, one does not know."

Scientists may simply have to wait and watch to see how that unintentional human experiment evolves. But they won't have to wait much longer to see what rising acid levels will do to ecosystems at the bottom of the sea.

Brewer takes us to a lab where scientists are working on an instrument that will eventually study carbon dioxide increases right on the sea floor. 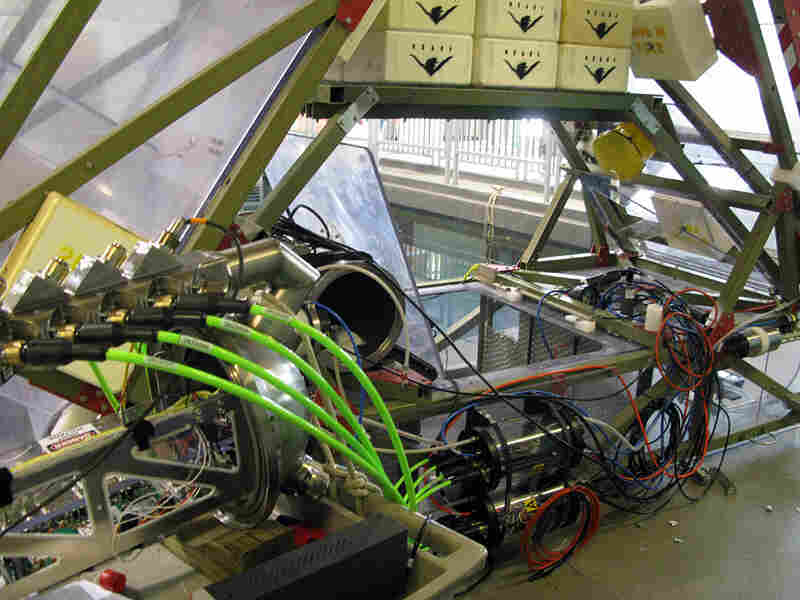 When deployed underwater, this large device will increase carbon dioxide levels in a test area, allowing scientists to observe and measure any changes that take place. Richard Harris/NPR hide caption 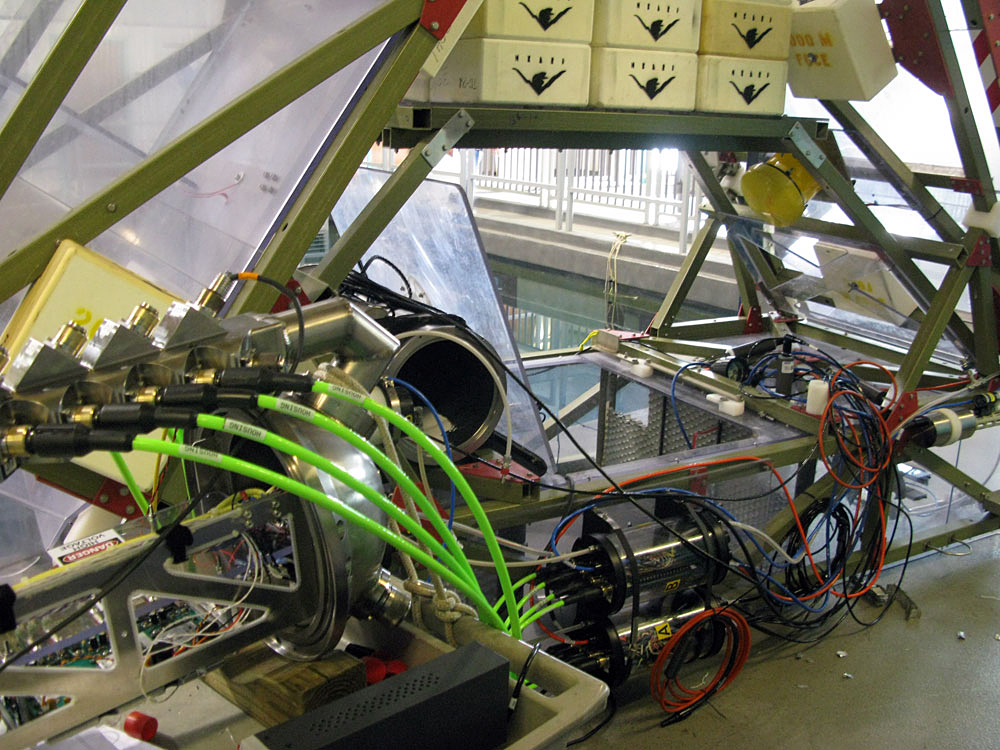 When deployed underwater, this large device will increase carbon dioxide levels in a test area, allowing scientists to observe and measure any changes that take place.

It has a green metal frame, bigger than a car, with Plexiglas wings that can unfurl underwater. One of the technicians is sitting right in the middle of the machine... where a test chamber will be.

"We can put some animals in there, add some carbon dioxide," Brewer explains. "It will flow through the chamber. We can create a change and we can observe behavior and make measurements."

Studying animals on the ocean bottom would, after all, be a more realistic experiment than a lab study — presuming they can get the test chamber to do a good job of simulating future ocean conditions. It'll probably take another year to sort out the technical challenges of getting this instrument to work well.

And while those problems seem solvable, Brewer ponders the enormous societal problems that created the acidity problem in the first place.

"We're all in a bind here," he says. "It's going to be very hard to maintain this number of people on the planet and not have these problems. It worries me that scientists sound the alarm but don't come up with solutions. We're going to have to try."

Technology has revolutionized ocean science during his career. He can only hope that it will also revolutionize the way we produce energy — before the oceans suffer irreparable harm.